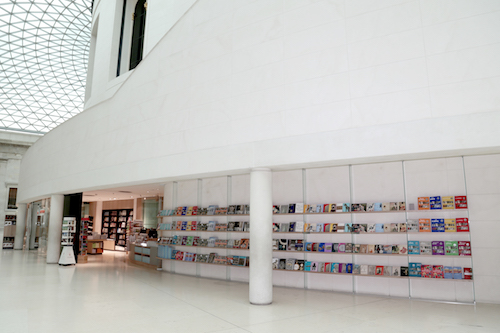 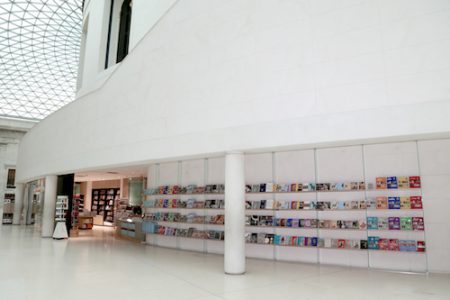 Arranged in a 35 metre architectural curve which wraps around the outer wall of the British Museum’s prestigious Great Court circular reading room, a striking new 1,200 sq ft bookshop has been created in Great Russell Street, London.

The shop, which has been designed to reflect the impressive architecture of the building, sells 350 British Museum titles, as well as 1,000 titles from other publishers and features a giant 2m diameter ‘wheel of books’ bespoke display at its entrance to attract customers in. Standing nearly seven-feet tall, the wheel contains 270 real books held in place by a metal ring that pierces all the books on the wheel.

The shop was designed by Lumsden Design, and is the sixth retail space to be created by the practice for the museum. Main contractors were Benbow Group, who were praised for their work on the project. 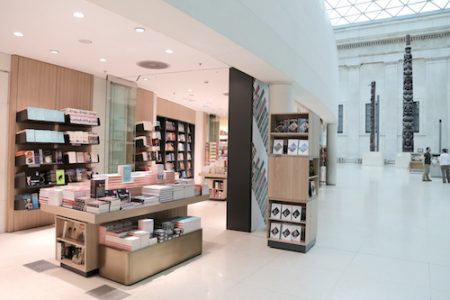 One of the challenges was that the footprint of the shop is a long narrow curve at around 3.2 metres deep – plus the fact that the design needed to work with Foster’s iconic architecture, as well as to accommodate 20,000 books on display and 2,000 in storage.

The interior decor features a palette of natural oak, black lacquered MDF and grey Corian with brass detailing, as well as black leather covered table tops replicating the original Reading Room writing desks. The bespoke retail units, which have been designed by Lumsden and made by Benbow Group, feature dovetail joints reflecting the craft of bookbinding. Integral concealed book storage space has also been incorporated in the design.

On entering the shop after passing the wheel of books, a series of book tables and shelving displays follow the line of the curved shop floor. 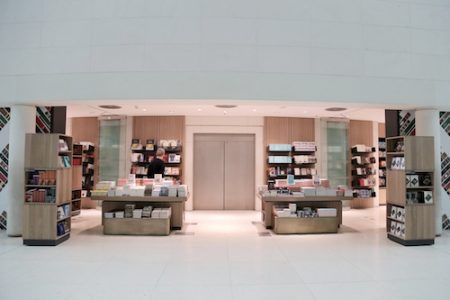 The shop has been designed so that sections of the Great Court’s Portland stone are visible between the displays and the oak mounted panels along the perimeter of the retail area.

“This was an important project for us, again giving the opportunity to work within this iconic building. We also have a nice relationship with the client said Catriona Mills, senior designer at Lumsden Design, adding that the practice is currently working on a further project at the British Museum.

“Benbow Group did a really good job and also worked with us on a previous project at the British Museum,” she added.

The project, which took five weeks, was completed in July 2014 and has generated positive feedback. 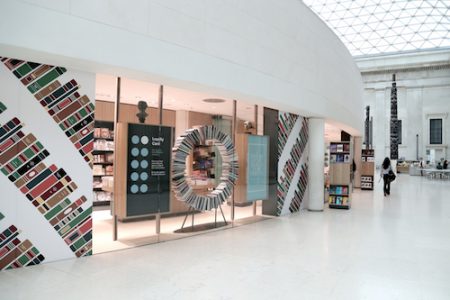 The Reading Room attracts visitors and researchers from around the world, who can now enter and exit on ground floor level via the bookshop.

Lumsden carried out the first of their six shop design projects for the British Museum in 2010.

Speaking of these projects, Roderick Buchanan, Retail Buying and Sales Director at the British Museum said: “The brief was ‘to provide the best design to fit the museum, and Callum Lumsden and his team delivered to the word! We adopted a collaborative approach, meeting the expectations of the British Museum’s board and curators, and drawing on its rich heritage.

“The end result has ‘wowed’ our visitors from around the world. These unique retail environments have already seen an increase in sales figures across the shops, proving our choice of agency was the right one. Working together with Callum has been a real pleasure, not just their flexibility, dedication, attention to detail and imaginative approach but their sense of humour and determination.” 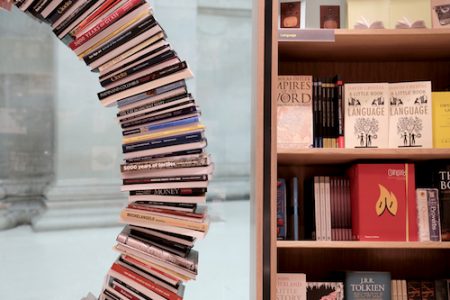 The Benbow Group specialises in prestige shopfitting for the luxury retail and heritage sectors. Committed to achieving customer satisfaction through rigorous quality procedures, the group have skilled craftsmen in all aspects of joinery, metalwork, veneering and polishing.

The Benbow Group has been in operation for more than 65 years, and continues to ensure that the wealth of knowledge and craftsmanship of its loyal workforce is passed on through apprenticeships and technician training schemes. Keeping all the key skills in-house at the group’s well equipped, 5,000 sq metre factory, puts the Benbow Group in control of the critical processes of quality, speed, accuracy and cost.

In addition to working with The British Museum, the Benbow Group has also worked on many heritage projects, including The British Library, Victoria & Albert Museum and the Horniman Museum. The group has also won awards for its work on the Royal Albert Memorial Museum. 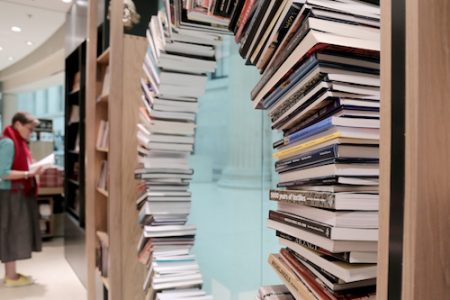 In the luxury retail sector, clients have included Mappin & Webb, Watches of Switzerland, Garrards, Mikimoto and many other well-known and respected brands.

“We relished the opportunity to work with Lumsden Design on the project at The British Museum – one of the most prestigious and visited locations in the capital, where we have had an opportunity to exhibit our craftsmanship.”

“We are proud to have worked on many prestigious projects and with some of the world’s most notable luxury brands during the past 65 years. The company is proud of its constant and consistent focus on quality and attention to detail, an ethic which is drummed into apprentices from the outset, and continues throughout their entire career with the company. The company’s fastidious approach has gained them approval from some of the most demanding international brands, and sees many clients return time and again, secure in the knowledge that their next project will meet expectation.”