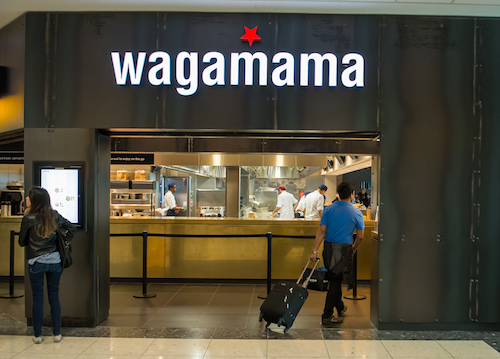 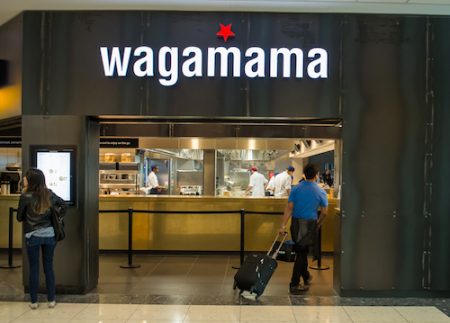 A new Wagamama restaurant has been introduced to Gatwick Airport, bringing Japanese-inspired cuisine to the upper floor.

Situated airside at Gatwick North Terminal, the restaurant comprises a single store and houses 160 covers. As Wagamama prides itself on the quality and speed of its service, all dishes are cooked fresh to order and served within 15 minutes, ensuring that passengers can enjoy a meal without the worry of missing their flight.

RTS acted as main contractor working alongside Richard Chin, Project Manager at Wagamama, having begun the £1.4m refurbishment project in March this year. The developments were finalised in July and subsequently the restaurant opened its doors to the public not long after. 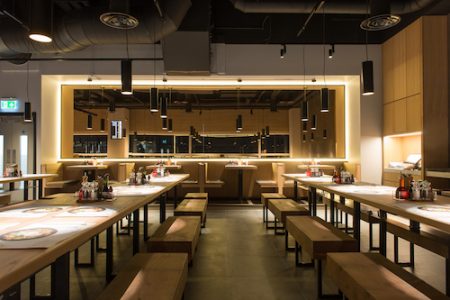 Hospitality designers Blacksheep were in charge of the interior design aspects of the restaurant, so Premier Hospitality caught up with Paul Wainwright, of Blacksheep, to find out more. Paul said:

“Our food philosophy elevates even the most humble ingredient, and we believe our material philosophy should be considered no differently. We place an importance on these humble materials that age and patina as they carry an inherent value through their story that changes over time.

“Being airside this brought logistical and project delivery challenges that you normally wouldn’t encounter on a high street project.” 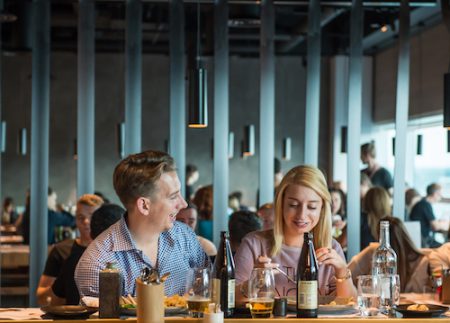 “There is going to be further development of the takeaway offer, as this was a grey area of the operation that has been trialled and appears to be successful.”

With the interior of the restaurant, the pallet is kept clean with simple natural tones. Rather than using bold and bright colours, Blacksheep allowed the raw material to shine. The use of raw timber and steel for table tops, and honed stone with untreated brass inserts allowed for a natural, earthy interior. The entire shop front is clad in hot rolled steel – producing a stylish, timeless exterior to the store. 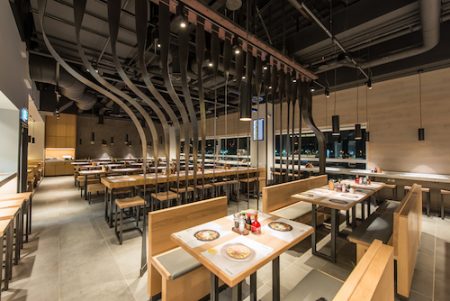 “Our lead designer Daniela Dohnalkova worked closely with RTS and S&A Steel to produce the steel fin room divide. Solid steel fins sit floor to ceiling in the middle of the space; these are then swept aside like a curtain where we need circulation. The concept direction was to create an object like a curtain which is perceived to be light and fluid but formed from something heavy and strong.

“These two ideas don’t mix easily. As a result there where many rounds of concept development and mockups made with S&A Steel before the final item was installed. However now in, they break up the room perfectly, allowing enough movement to be seen while removing the reparative lines of seating from the space.” 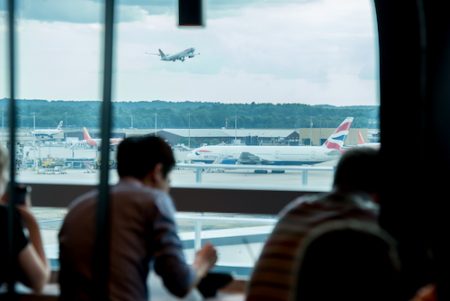 When Premier Hospitality asked if there were any restrictions during the project, Paul replied:

“The list is endless; we were working in a live airport environment. All equipment and deliveries had to be security screened and checked before being booked into a time slot for delivery to site. We could only carry out noisy work between set hours after passengers had left the terminal. All contractors without full security passes had to be escorted to and from the site, even to use the bathroom!”

Airport environments are naturally challenging environments to deliver in, however they give a brand an opportunity to break the mould and push the boundaries of their brand experience. For Blacksheep, having Jamie’s Italian and now Wagamama next door to one another is fantastic. It shows a great diversity to their designers’ talents. 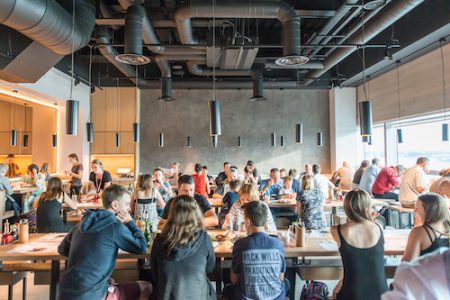 “We have just finished a flagship store for Wagamama at the Trafford Centre Manchester.  This is one of the largest stores we have worked on at 482m² with 296 covers split over 2 floors.”

Blacksheep is an independent, international and award winning design agency based in Clerkenwell, London. The company supports the world’s best food and drink brands and individuals by providing them with intelligent solutions that consider every touch point of a successful concept – from strategy and insight, interior design and experimental to branding and communications.

Founded in 2002, the agency quickly established itself as a global expert in today’s competitive modern food culture, working both locally and internationally for clients such as Jamie’s Italian, Brasserie Blanc, Ritz-Carlton and Mandarin Oriental as well as, of course, Wagamama.