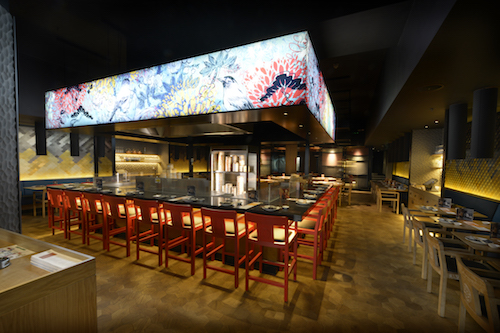 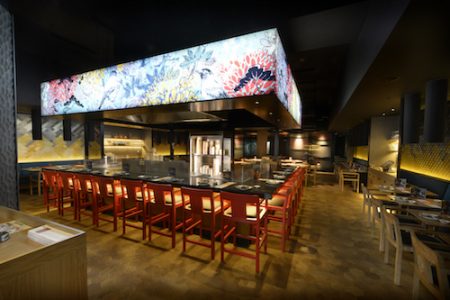 Already performing above projected expectations just weeks after opening, Ping Pong is a new restaurant specialising in Dim Sun, cocktails and Chinese teas and is located in the Westfield shopping mall in Shepherds Bush, London.

The new opening is the ninth for the chain, which is growing from strength to strength.

The 5,800 sq ft venue was created over two floors within a unit in the mall’s food and drink section known as ‘Eat Street’. The restaurant is located on the ground floor, with the upper floor incorporating back of house facilities.

Designers for the scheme are Superfutures, with Rocket Interiors as main contractors.

“The new restaurant is performing above expectations, so we are very pleased,” said Ben Webb of Superfutures. 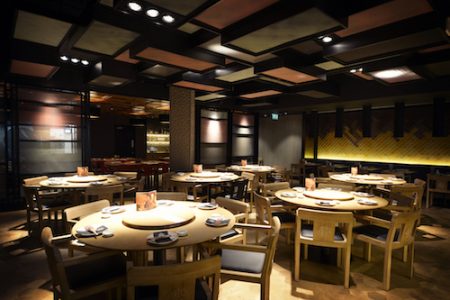 He added: “The project went very well, because as we have already completed three Ping Pong venues to the new design concept using the same contractors, subcontractors and consultants, we have learnt a lot along the way, so it was all very straightforward.

“Rocket Interiors are ideal to work with as they understand the thinking behind the scheme and are extremely pro-active. They were very, very good.”

Initial works comprised the complete strip out of the interior. A prominent feature of the new restaurant is the square dim sum counter, surrounding a central island where customers can see the dim sum being cooked in stacked steamers (dim sum is small bite-sized steamed food, served alongside fried, rice and griddled dishes).

Over the central island is a giant light box bespoke artwork feature which serves to further highlight this area. An additional kitchen used for preparation is located to the rear of the restaurant. 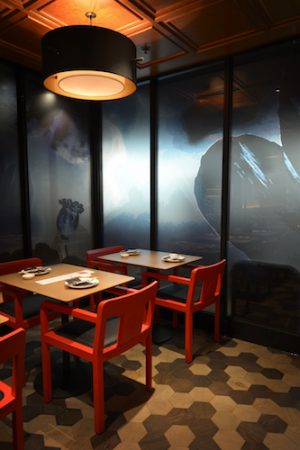 Another prominent feature is the bar, which features a blue faceted tiled frontage giving a 3D effect, which was inspired by dragon scales. Cocktails are prominently displayed at the bar, as this is a key feature of the restaurant’s offer.

The main dining area includes a mixture of fixed and moveable seating, including banquettes along the perimeter, with the walls above featuring disks in various shades of gold, creating a fish scale effect. Feature pendant lighting is suspended above each table and all of the tables and chairs are bespoke, having been specially made in China. 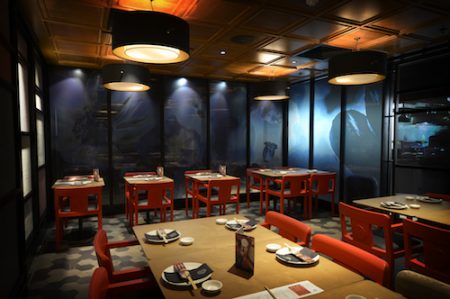 “The whole design is focused around the food offer,” said Ben Webb. “The colour palette includes gold, veneered timber, and turquoise – because since the interior is quite dark, we have introduced splashes of colour throughout.”

A further element is an open air terrace and bar, which can be created by opening up the venue’s retractable shop front.

Staff offices and other back of house facilities are located on the mezzanine floor above. 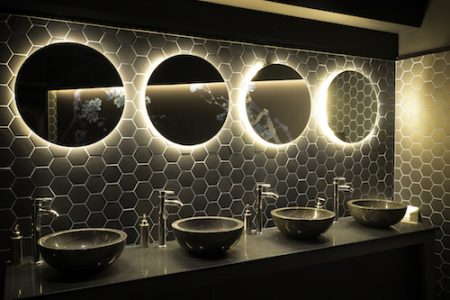 Art Sagiryan, CEO of Ping Pong, said: “Following the success of Ping Pong in Westfield Stratford, we felt that the site in Shepherd’s Bush would be an optimum location for us.

“We have built a strong relationship with the Westfield team over the last year and were very excited to be able to work with them again.

“We have ambitions to open one more restaurant before the end of our financial year, in April 2016, as well as a further two or three in next year.”

From its early concept a clear direction was set for Ping Pong and the group was to become known for dim sum, cocktails and tea. An essential part of the dim sum culture is sharing among family and friends. The founders felt passionate that Ping Pong should bring an authentic dim sum experience to London, but with its own original twist, so all dishes were created to be shared. 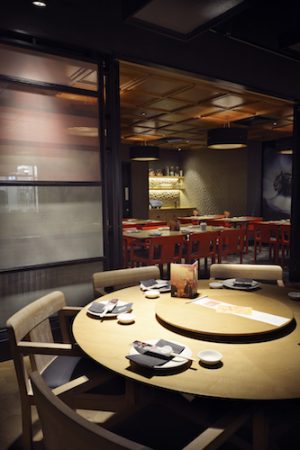 The first Ping Pong opened at 45 Great Marlborough street in 2005 and this remains the flagship property within the group.

CEO of Ping Pong is Art Sagiryan is a long-serving member of the Ping Pong team. He has worked within Ping Pong since its beginning and has experienced all sides of the business making him a passionate and committed CEO with a clear strategy for development – both in the business and its people.

Ping Pong has plans to continue its expansion both in the UK and internationally. 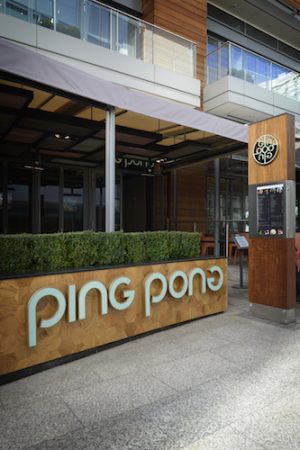 BAF Graphics is a large format and large display, graphic production and installation company, working on projects throughout the UK, from high-end retail schemes and office projects to major museums, exhibitions and more. BAF Graphics has been in operation since 1981 and over the past 34 years has built up a strong reputation as one of the UK’s leading producers of graphics.

Most recently, BAF Graphics has been involved with Ping Pong at the Westfield shopping mall in Shepherds Bush, London. Working on the Ping Pong project, BAF Graphics was responsible for the production and installation of the restaurant’s graphics, including a bespoke graphic that forms part of a feature light box. 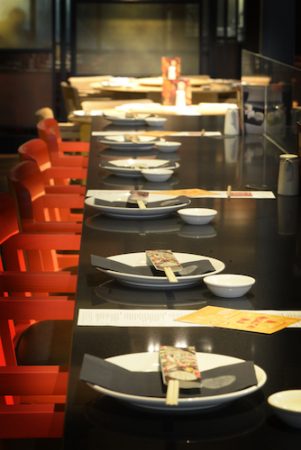 “We work on so many different types of graphics that we have the capability to work with everyone from architects through to clients designing and organising exhibitions. Working on a project like Ping Pong was fantastic and something I found very interesting to be a part of.”

“At BAF Graphics we pride ourselves on our high-end, high quality service and our fast delivery.”