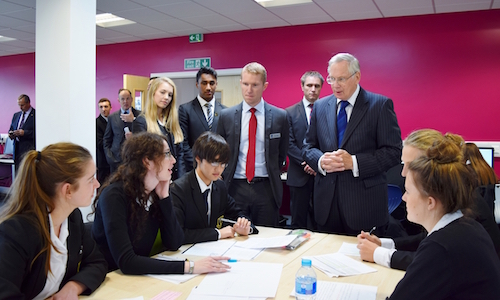 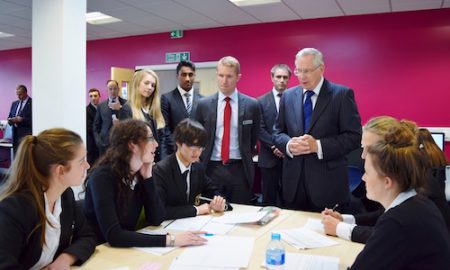 His Royal Highness The Duke of Gloucester KG GCVO has officially opened the Chaloner Building – a £3.6 million teaching block at Glyn School.

His Royal Highness, who is first cousin of Her Majesty The Queen, started his visit by meeting and inspecting cadets from the CCF before chatting to students working towards their gold Duke of Edinburgh Awards.

Having met local dignitaries and members of Glyn’s leadership team, His Royal Highness was taken to see a Year 9 geography class and a Year 7 science class after which he spoke with the Head Boy, Sean Jayakrishna and the Head Girl, Olivia Keen, and other sixth formers in their private study area.

The Duke of Gloucester then met representatives of the architects who explained particular design features of the building.

After this, His Royal Highness was introduced to members of the Parent Staff Association before meeting Governors and Year 13 students in their common room.

The highlight of the event was when The Duke of Gloucester unveiled a plaque to officially open the building named in honour of Jon Chaloner, who, for the last nine years has given outstanding service as head teacher of Glyn and who is now Chief Executive Officer of GLF Schools, of which Glyn is part. 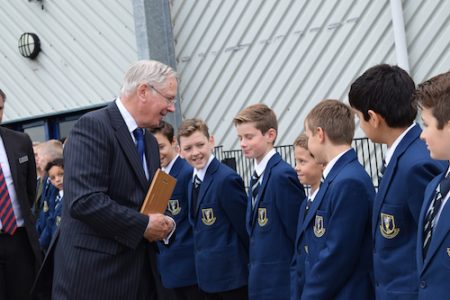 “It was a great thrill for the whole Glyn community to welcome the Duke of Gloucester to open our new building, a building that provides 18 modern classrooms as well as a learning resource centre, meeting rooms and a common room. This fabulous addition to Glyn is a fitting tribute to the exceptional work of Jon Chaloner.”

The Construction Consultancy, Baily Garner LLP acted as project managers, architects, mechanical and electrical engineers, cost consultants and environmental sustainability consultants for the scheme. The scheme was constructed by Armfield Construction Ltd and the structural engineers were Elliot Wood.

Situated on a greenfield plot adjacent to the south western boundary of the school site, the new block replaced a number of life-expired buildings located elsewhere on the site, including an English and art block, sports hall, music hut, history block, creative arts 2 block and year 7 lockers hut – all have been demolished.

Facilities within the new block will include a canteen and servery, 18 classrooms, a learning resource centre, meeting rooms and welfare facilities.

The new building is structured around a steel frame and is constructed in a combination of single and two storey levels, with the single storey element over the canteen and servery.

The external elevations are a combination of brick and insulated render, with aluminium composite framed windows and flat roofing.

Glyn School is the only boys’ comprehensive in Surrey and one of the county’s best-performing schools. The school has a long heritage of academic excellence, sporting prowess, artistic achievement and service within the community.

It is an ‘outstanding’ school (Ofsted 2009 and 2012) and is among the top performing schools in the county. In 2012 and again in 2013, it was ranked as the fourth non-selective boys’ school in England for its GCSE performance on attainment.

Over three decades Baily Garner has become the construction consultancy of choice for the housing, care, education, health and commercial sectors. The business fosters a collaborative interdisciplinary culture.

Armfield Construction is a long-established building and contracting company with a substantial portfolio of public and private sector clients. The company has extensive involvement in public sector projects, such as schools, hospitals and care homes and is also active across a wide range of residential and commercial projects.