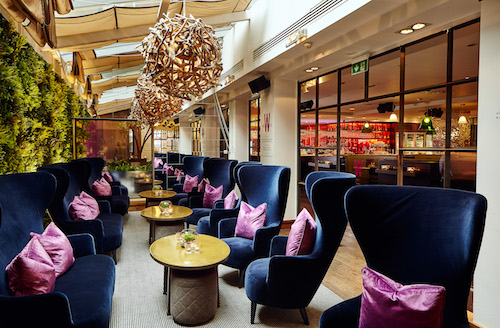 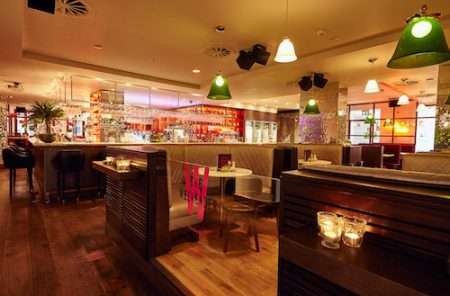 Located on George Street, the venue, which includes an award winning hotel, recently underwent an impressive transformation of its interior layout, furnishing and decor in a project led by Jim Hamilton of Jim Hamilton Design. Main contractors were Thomas Johnstone Ltd.

Explaining the rationale behind the scheme, Jim Hamilton said:

“Tigerlily was originally conceived in 1996 and had a massive impact on the Edinburgh social scene, of which it has become an integral part.

“To take the original concept, give it a shake and update it to 2015 has been an interesting challenge. 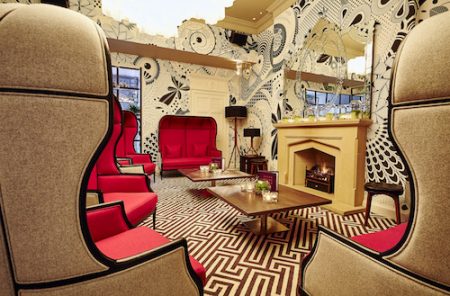 “The original seed that was sown way back in 1992 was to create a series of interlinked social spaces that worked seamlessly in harmony with each other 24/7. Not easy given the scale of the overall footprint and made more difficult by the fact that you also have the late night venue Lulu in the lower ground floor and 33 boutique scale hotel bedrooms on the three upper floors.

“In re-examining the previous ground floor layout with Montpeliers, we all felt that a key move was to open up certain areas that we had originally screened off. The deliberate ‘closing down’ of areas was originally intended to encourage guests to explore and discover all of Tigerlily’s little nooks and crannies.

“This was an unmitigated success, but we all felt that certain areas could now afford to be opened back up to increase the views and encourage even more social interaction. It was also in reaction to some changes that have developed in the intervening nine years since opening, including a tendency to visually merge bar and restaurant spaces rather than have them clearly defined.” 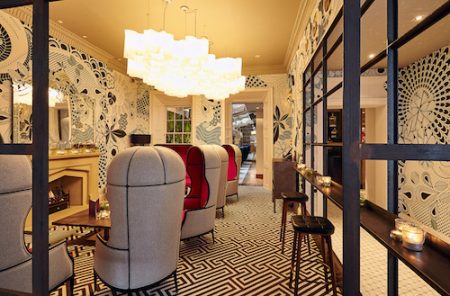 Key areas of the refurbishment includes the external terrace, the lobby entrance and Georgian Bar, the Georgian Lounge, The Green Room, the main bar, the rear bar, and the addition of a new raised lounge area and a new room known as East Side, providing flexible space for both evenings and daytime.

Occupying the front section of Tigerlily and housed within an original Georgian building, (the larger rear section of the venue occupies a 1980’s constructed extension), the lobby and Georgian Bar have also been transformed.

Design highlights including the addition of over-scaled curtains and a large mirror, combined with a Moooi pendant inter-lobby area to create additional drama. 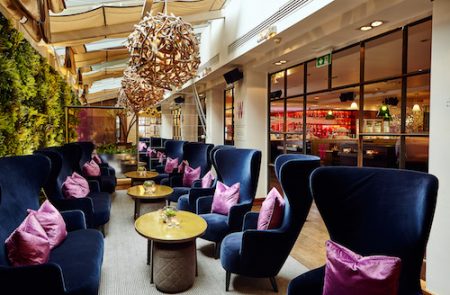 The Georgian Bar’s original U-shaped bar top and frontage has been re-covered in white marble and a mirror-polished stainless steel open gantry has been added overhead to create the main focus within the room. This is combined with a white marble triangular mosaic from Porcelanosa with tiny circular mirror dots inserted between the joints. The tall bar stools have been added to with a new range by Stellar Works, and a new large scale black and white illustration forms the entrance to the Georgian Lounge directly beyond the bar.

Another simple but very effective improvement has been to remove the layers of pieces that were partially blocking the views both in and out of the Georgian Bar from George Street. This has helped make the bar area much brighter in the daytime and at night has served to make it more visible from the street.

Located at the junction between the old and new architecture, the Georgian Lounge now features a striking new bespoke black and white illustration occupying all of the walls, complemented by a bespoke charcoal and white rug by Gravity Flooring and a new series of ‘Laval’ high back armchairs and sofas by Stellar Works, which establish a slightly formal but still relaxed tone around the original fireplace 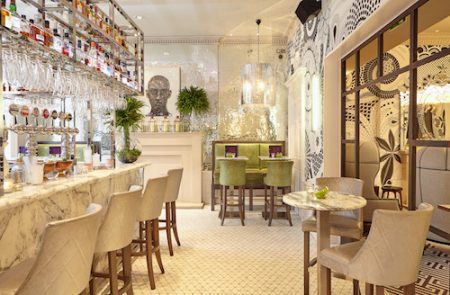 Open Crittall screen frames have been added to slightly sub-divide the lounge from the main passage between old and new spaces. In addition, the ‘cloud’ light installation from Artemide has been re-located from the Georgian Bar into the Georgian Lounge.

Within the Green Room, an artificial green living wall has been added as a striking backdrop, and the line of Crittall screens has been carried through from the Georgian Lounge into the outer edge of the Green Room, providing visual sub division as well as flexibility to allow the space to be used for private functions, when required.  A new charcoal and white stripe rug complements the existing Tom Dixon Wingback chairs, which have been re-covered in their original colour.

A new raised lounge area has been created right at the heart of the main space in Tigerlily, facilitated by the removal of the largest section of an open timber slatted screen that sliced a line through east and west.  Featuring four Crest leather clad circular booths with white marble table tops and utility chairs by Stellar Works, set against two lines of green glass Moooi ‘Bell’ lamps, this raised area offers a prime visual vantage point, affording clear views all around. It also has the added advantage of linking directly to the new East Side lounge that occupies the space once adjacent. 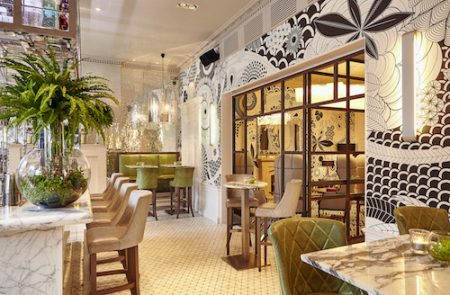 The new East Side lounge is a combination of the previous smaller private dining room and the adjacent East Lounge. The two ‘bookends’ to the space are a full height, heavily stocked library wall at one end and a full height heavily stocked drinks cabinet at the opposite end.

Linking both ‘bookends’ is a contemporary gallery wall made up of had picked print works purchased from Edinburgh Printmakers.

The venue’s main U-shaped bar now features a striking white Calacatta marble top which contrasts with the dark oak frontage and a set of ‘Lunar’ leather high bar stools by Stellar Works wraps around the bar making for perfect perching.

The re-working of the bar gantry and an extension to the length of the bar has created a new dedicated service area and a full height wine wall backdrop and doocot shelving detail. The suspended glass bar gantry forms a pseudo glass chandelier wrapping around the perimeter of the main bar.

The area to the rear of the main bar has been slightly opened up by the removal of a mesh screen dividing the bar from the rear restaurant area. The bar gantry continues slightly along the side wall and pops back out again in the form of a drinks cabinet in the rear room.

The original red acrylic pendants that hung in the area that is now the Raised Lounge have been re-sited in an eclectic mix within the rear area. ‘Ren’ chairs by Stellar Works sit side by side with ‘Utility’ high stools, Calacatta table tops and freshly painted white reclaimed brick walls. In addition, new rear banquettes upholstered in vintage tan have been installed. 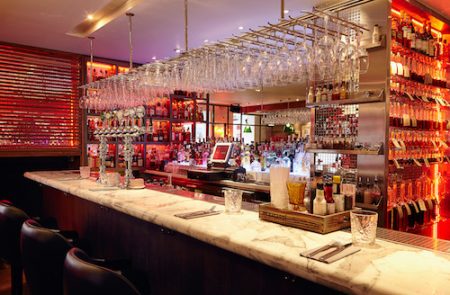 Electrical Contractors AKD specialise in full electrical fit-out contracts such as the one at Tigerlily as well as offices, schools and warehouses. AKD can deal with everything from the mains distribution boards, cabling and containment through to small power, energy efficient lighting, fire alarm, access control, data and so much more.

AKD celebrated its milestone 25th anniversary in 2014, having earned itself a positively successful reputation over the years. As a company, AKD prides itself on value, understanding and flexibility. Some of their national multi-site clients include Menzies Distribution, Dulux and Johnstone Paints, as well as unique contracts such as power and lighting of Edinburgh Airport Entrance Plaza.

“Working closely with the Keenan Consultancy, AKD installed new feature lighting throughout and adapted some of the original lighting and controls as well as adding power and data.

“Tigerlily is one of the most iconic venues in the heart of Edinburgh. Everyone was talking about it and we were delighted to play our part.”