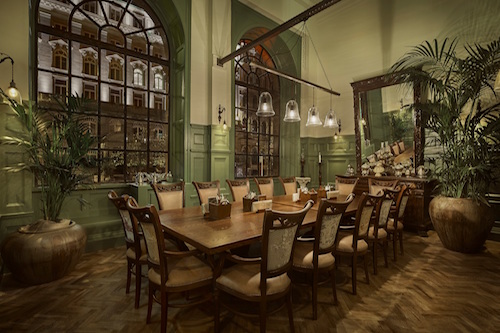 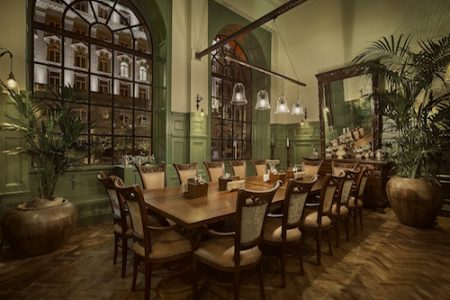 Eccentric, eclectic, opulent and imaginative, and inspired by the spirit of the East India Trading Company, Glasgow’s new The Trading House bar and restaurant has been created within a Grade II* listed building, described by the interior designers as “one of the most precious buildings in Glasgow.”

Located at 24 St Vincent Place in The Citizen Building, the former offices of The Evening Citizen newspaper, which were built in 1889, the impressive 7,500sq ft venue has just opened and is the first of its kind outside of London.

The venue is on three levels – a basement area for storage, a ground floor incorporating the main dining area and bar, and a mezzanine level including the kitchens and another dining area.

The project was carried out for The New World Trading Company. The architectural interior designer was Harley Danson, son of Paul Danson, of Paul Danson Imagineering, and main contractors were Charles Evans, who were commended for doing ‘a superb job.’ 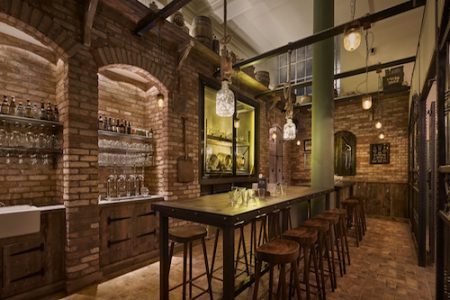 “Like most of the buildings we select for The Trading House venues, this one features very high ceilings and has a ‘banking hall’ opulent feel to its scale and we have added some ‘Harry Potteresque’ elements,” said Paul Danson.

The Trading House interior design concept is underpinned by a theme based on an imaginary eccentric character who travelled the world collecting all sorts of artefacts such as antiques, guns, swords  spears, objets d’art and photographs of places he went to – with all of these ‘peculiar eccentricities’ being displayed in the venue.

In addition to these, the design features bronze, green painted wood panelling and antique mirrors in keeping with the ‘period’ style. Seating includes leather upholstered chairs with fabric backs including an eclectic mix of materials, as well as fabric upholstered banquettes. “All the furniture is bespoke, as are the light fittings and all the artwork on the walls,” said Paul Danson. 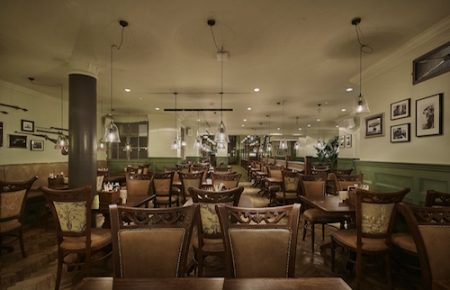 Elements of taxidermy also play a key role in the interior design – including an imposing American Grey Eagle on the newel post at the bottom of the grand staircase, and mounted stag and warthog heads on the walls – all specially sourced by the designers.

Other elements of the interior include a private dining area and a beer tasting room, created to look like an old beer vault with brick walls and entered through steel gates. The room, furnished with rustic benches, can accommodate up to 16 people.

“We wanted to add freshness and femininity to the interior, which was a challenge as the nature of The Trading House design is rather dark and masculine,” said Paul Danson. 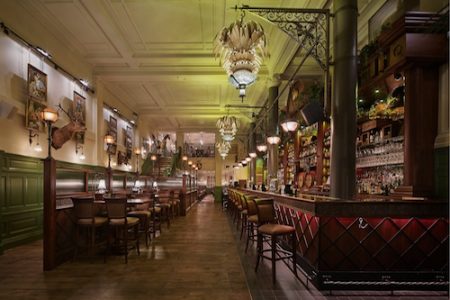 The project also included structural works to form back of house facilities and exits and minor external works, which were kept to a minimum due to planning restrictions resulting from the building’s listed status.

Dawnvale recently completed the Trading House, where they were commissioned to take care of the bar and kitchen design, manufacturing and installation works.

“Glasgow enjoys a reputation as one of the best and most eclectic dining cities in Europe. Combining a thriving social scene with a striking interior meant we knew we were going to have to design and produce a bar and kitchen capable of the high level of demand the Trading House will be facing. 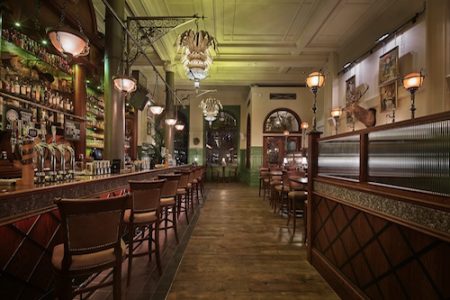 “It’s been fantastic to be part of such a historic venue as well as the Trading House’s first venture outside of London.”

Food with a focus on deli, rotisserie and barbeque style dishes is served all day.

The dessert menu offers everything from strawberry and marshmallow or banana to coconut kebabs and rum baba.

Taking the lead in the kitchen is Martin Kane who joined as head chef, having previously worked at Darcy’s in Princes Square for nearly two years and the Waverley Tea Room. 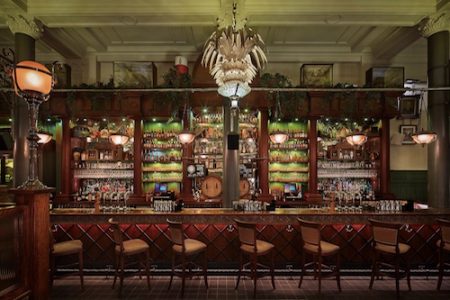 The current venue is the second of a national roll out for The Trading House, with the first being opened in St Paul’s earlier this year.

Other themed venues by The New World Trading Company include The Botanist, The Oast House and Smugglers’ Cove.