Rosslyn Park proudly describe itself as SW London’s premier rugby club and now the National League 1 side can boast they also have the finest pitch in the capital, after unveiling their stunning new SIS Pitches 3G surface.

It is the latest rugby union team to convert to artificial grass by SIS Pitches, following on from Newcastle Falcons and Saracens, who both play in the Aviva Premiership league.

The current natural turf pitch at the London stadium was replaced with SIS Pitches’ premium product, Rugger 65, which is also used by the two Premiership teams. It is ideal for rugby games, with proven durability even after the most intensive use.

Over the years Rosslyn Park has built up an excellent reputation for its dedication to the game and ability to bring rugby to new players. However, in recent years ground and facilities at the club’s Upper Richmond Road, London site had become rundown and in urgent need of attention.

In order to maintain the high standards for which Rosslyn Park FC is known, the club initiated an important refurbishment project designed to update and upgrade facilities at the site in 2015. The project centred on transformation of the club’s existing pitch, taking it from a grass pitch to an artificial 3G playing pitch, ideal for all weather conditions.

Shaun Justice, Managing Director at Rosslyn Park, said:
“The ground and facilities had suffered from a lack of investment in recent years, they were rundown and in desperate need of improvement to allow the club to maintain the standards for which Rosslyn Park FC is known.
“One of the club’s biggest problems was lack of space. With only one pitch on the club’s main site, the club rented four pitches in Richmond Park but these were littered with deer excrement and had no basic facilities nearby, such as changing facilities, food/drink or shelter.
“This led to a very segmented club with some members never having contact with their home ground and clubhouse. Therefore Rosslyn Park converted its grass pitch into an artificial playing pitch on its main site to increase activity across its membership and the local community.”

The catalyst for the project was the need to make the club accessible and playable no matter what the weather. It was also recognised that a new pitch would open up further opportunities, especially for younger members of the community looking to get involved with the game.

The previous grass pitch sustained less than eight hours of use per week, as it needed to be preserved in order to support the playing requirements of National League Rugby throughout a whole season. However, the new artificial pitch does not suffer the same shortcomings and instead increases the pitch’s usage to more than 50 hours per week, uniting the entire club and community around one pitch.

Shaun said:
“Every year the club welcomes new members across all ages and abilities, so we are looking to extend this further with increased pitch usage. The increased usage allows us to move away from our previous point of saturation and actively promote new members in the local area.
“Rugby is very much a minority sport in the majority of the state schools in Wandsworth. Through the Rosslyn Park Community programme we are able to provide the pitch, equipment and knowledge to introduce rugby to 100s of local children per year.”

Operating from Leighton Buzzard for over 150 years, Garside Sands – part of Aggregate Industries – has provided its specialist products for the rugby pitch at Rosslyn Park. The material supplied was Garside Prosport 2EW – the highest quality sports sand on the market, and one that is supplied to not only UK venues but also around the world.

Work began on the installation of the new pitch in mid-May 2015 and reached completion in August. The project spanned a period of 14 weeks, during which time the pitch was closed off to members.

Speaking to Premier Construction about their involvement, SIS Pitches’ UK Projects Director, Phil Blackwell, said:
“Rosslyn Park is a well-known rugby club within the London area as well as within the UK, so we were delighted to get involved with this project. The synthetic pitch gives the club better usage than the natural pitch and this in turn allows the club to accommodate a lot more rugby. This not only means more games can be played at the club but also helps to secure a better source of income.”

SIS Pitches constructs and maintains sports surfaces for some of the biggest names in sport, from Manchester United to Real Madrid. Each project is undertaken with the same level of care and attention to detail and each project brings its own challenges.
“Getting the project complete and ready for the new rugby season was a big challenge on the project, but this is something we are used to, so perhaps the biggest challenge was the location in South London.
“Getting materials to and from the site, especially in the quantity required, was quite tricky and the real challenge,” said Phil.
In total, around 4000t of material taken from the natural pitch was removed from the site. Meanwhile, 6000t of new material was imported back onto the site, in order to construct the artificial pitch.

Phil added:
“Once we removed the old pitch we installed a new drainage system, along with a stone blinding layer and a 25mm rubber shock pad. This was then topped with the pitch itself.
“As for the former pitch, the material was rotavated up into top soil, stockpiled on site and then transported to a school in South West London where it was re-used to level-off a playing field.”

Since work reached completion on the project the feedback has been very positive from all who use the pitch which is something that is very rewarding for SIS Pitches.

Phil continued:
“The feedback has been great. The club can now use the pitch seven days a week, for up to ten hours a day should they wish and they love it, which is just fantastic.
“We pride ourselves on our rugby pitches and have established a name for ourselves within this sector. We’ve previously installed pitches for Sacarens and Newcastle Falcons, so to be able to provide yet another pitch for a club like Rosslyn Park is just brilliant.”

Additional works completed at Rosslyn Park have included the installation of a sheltered stand with toilet amenities; the replacement of ageing netting and posts; the improvement of shower facilities; the refurbishment of the member’s bar; and the improvement of security gates and fencing. Asbestos stands – situated on the Upper Richmond Road side of the club – were also removed and additional landscaping work was implemented. 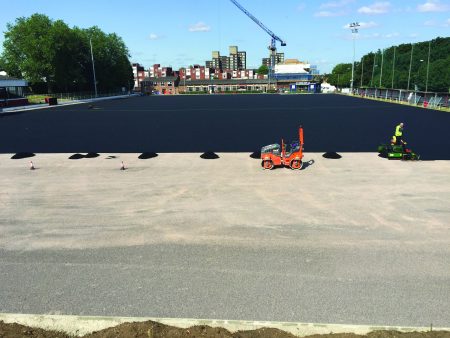 Rugger 65 incorporates top of the range yarn, MN Ultra from Scottish firm Bonar Yarns, who are a key supplier to SIS Pitches.

Bryn Lee, Managing Director of SIS Pitches, commented:
“Rosslyn Park is one of the oldest clubs in the country and now becomes one of the first to embrace 3G synthetic turf technology. In choosing SIS Pitches’ product Rugger 65, which incorporates Bonar Yarns MN Ultra fibre for the grass, Rosslyn Park have opted for a market leading system designed for a fast paced game of rugby.”
For more information about Rosslyn Park FC or to keep up to date with all the latest news from the club, please visit: www.rosslynpark.co.uk. To see a timelapse video of SIS Pitches’ installation, please visit: www.youtube.com/watch?v=wYLnD7B9W_8.
Aggregate Industries

Garside Sands has been operating from Leighton Buzzard for over 150 years. Today, it produces specialist silica sands from its five production units including the flagship Leighton Buzzard and Levenseat sites. Garside Sands offers the UK’s highest quality and widest range of sands available, providing some of the UK’s most iconic sporting venues and clubs.

The company’s unique materials can be used within the sports and leisure sectors, alongside building materials manufacture, water filtration and the energy sectors.

Priding itself on best practice in sustainability, Garside become the first company to be certified to BES 6001. The Framework Standard for the Responsible Sourcing of Construction Products, developed by the BRE (Building Research Establishment) and a founding member of the UK Green Building Council. Aggregate Industries is a proud member of the LafargeHolcim Group.

Garside Sands has supplied some of the UK’s most prestigious sporting teams and venues including Premier League football and rugby grounds and academies, the Rugby World Cup 2015 venues, plus 2012 Olympics and equestrian arenas and some of the UK’s leading Golf courses.

However – the company’s products and technical expertise are also tailored towards grass-roots sport. The team at Garside is proud to supply municipal and local sports facilities and amateur and semi-professional sporting institutions to help enhance and improve the level of sporting facilities across the UK.

Premier Construction caught up with Andy McCluskey, of Aggregate Industries, to discover more information on the company and its involvements with the Rosslyn Park project. According to Andy:
“Our customers and end-users expect a high level of performance from the sand material within their new pitch. Garside Sands takes extensive steps to guarantee the performance and quality of this material, through ongoing investment in production plant and close monitoring at all stages by our highly trained technical staff.
“The material supplied was Garside Prosport 2EW – the highest quality sports sand on the market. The quality of this material and benefits it lends to sports pitches ensures it is supplied not only to UK sporting venues but also around Europe and the world.
With the increased use of 4G artificial pitches across UK sport, Garside Sands has been a key stakeholder in providing the necessary materials for such developments. With its flagship Prosport 2EW pitch sand, the technical capability for this material provides all of the physical and chemical attributes needed within a 4G pitch. Garside Sands provided SIS pitches with the materials for this project – with the new pitches allowing the club to offer players up to 60 hours of playing time per week – not otherwise feasible on natural surfaces.

Garside Prosport 2EW is a sub angular to rounded shape sand, graded to 0.71mm-0.25mm and specifically developed for the synthetic sports market. The company’s unique production process ensures the quality, cleanliness and precisely screened and technically graded nature of this material that leads the market. It is free draining and available loose, or in a variety of different of different sized bags.

Andy added:
“Garside is proud to support elite level as well as grass-roots clubs, athletes and facilities. Rosslyn Park is one of the most historic rugby clubs in the UK, but with a vision to implement new technologies to develop the club for the future, Garside Sands was proud to be part of this project through SIS Pitches.”

Aggregate Industries has over 310 sites throughout the UK and northern Europe – making market-leading building materials available to our customers at all times. The company has been providing materials to some of the largest construction projects in the UK, from the Olympic Park in 2012 and The Shard in London to motorway infrastructure development in the North of England and coastal defence projects throughout the UK.