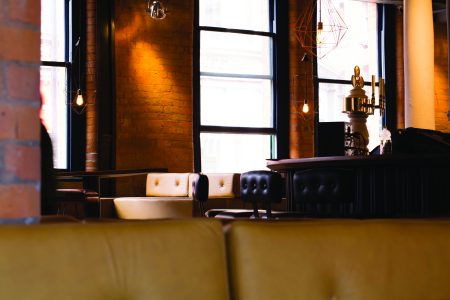 Situated within a Grade II listed building in space formerly occupied by a tailors studio, Cottonopolis – a smart new ‘industrial chic’ 80 cover bar and restaurant in Newton Street in Manchester’s Northern Quarter – is the creation of architect Nick Muir, who first spotted the site for his new venue two years ago.

Owned by Nick Muir and his wife Hayley, Cottonopolis opened in November 2015 and serves a menu inspired by traditional Japanese dishes.
The couple’s aim is to provide no frills, quality food and drink in a venue inspired by the city’s former merchant trade connections.
“We think the cuisine will sit comfortably with the Northern Quarter’s current offering. We were conscious to not replicate the burgers and the pizzas already in the area,” said Nick Muir.
The project to create the new restaurant and bar was designed and managed by Nick Muir himself, through his design company Core Design. He describes his work on the scheme as “a labour of love.”

When he first discovered the space, Nick said it was filled with old radiators and it was hard to imagine the transformation that was soon to take place.
The name Cottonopolis was chosen for its links with Manchester as it denotes a metropolis centred on cotton trading, and was inspired by Manchester and its status as the international centre of the cotton and textile trade during the 19th century.

At that time, 80% of the world trade in the finished material was being bought and sold at Manchester’s Royal Exchange and this age of textile dominance, of mills and warehouses, still defines the city in the Northern Quarter, Chinatown, the Village and down past Oxford Road.

Many of the building’s original features, including cornicing work, exposed red brick walls, wooden flooring and recycled old chains and metal doors, have been retained. The cast iron columns have also been retained, as have the original lifts.

Visitors might even notice the wear and tear on the restored floorboards, where tailors once walked around in the former workshop in their clogs.
The venue includes a generous sized bar, a spacious lounge area and an open kitchen to the rear, and there’s also a large upper floor space, with original windows and a high ceiling. The restaurant’s Manchester bee logo, designed by Nick Muir, is emblazoned on the windows.

All the furnishings are bespoke, and design palette is in shades of copper and deep blue.

The Ice section includes items such as prime cut sliced sashimi as well as Nigiri (which is thinly sliced and pressed onto rice), using such ingredients as Loch Duart salmon; Yellowfin tuna and Welsh reared sea bass. Then there’s fillet seared beef Tataki, broccoli and peanut salad and tuna tartare.
Dishes which might be included in the Fire menu are robata grilled chicken, vegetable or pork Yakatori, Lamb Nasu cutlets and robata grilled squid and wakame.

The snack selection could comprise options such as pork scratchings and chilli jam, lotus crisps and aubergine Nasu, and prawn crackers and avocado dip.

The cocktail menu has been designed by award winning bar consultant Jamie Jones and features bespoke contemporary cocktails with inspiration from traditional culture blended with the modern energy of downtown Tokyo.

Cocktails include the ‘Takeaway Tommy’ complete with disco-ball ice cubes and the NWA – a hip-hop cocktail featuring Nikka Japanese whisky, which comes dressed in a blue bandana.

Situated above the bar are two Krusovice tanks holding 880 pints each. Below, fridges are stocked with a selection of 12 locally sourced and European bottled beers. A wine list that compliments the food also includes a selection of five sakes. 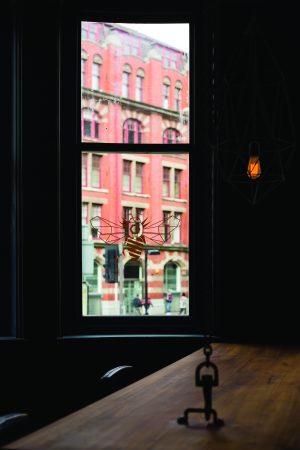 R Tinker Welding is a Manchester based structural steelwork specialist, also providing a general engineering, design and fabrication service.
Since establishment in 1960, the company has been passed down a generation from father to son; the company has also worked on a number of prestigious local projects.

R Tinker Welding have worked on a number of JW Lees properties, manufactured the canal balcony at Malmaison Hotel in Manchester City Centre and carried out additions to the mezzanine steelwork at the Great Northern Warehouse. The company also supplied structural steelwork to the Port of Liverpool building.

Working on Cottonopolis, R Tinker Welding supplied structural steelwork, and made table frames, hand rails and bar fittings.
Graham Tinker, Managing Director of R Tinker welding said:
“Cottonopolis is a prime example of how a once derelict building can have a new life. I have always taken a keen interest in bringing the past into the future and we have worked on several such regeneration projects.”

Graham added:
“We pride ourselves in being a small company and therefore being able to give every project individual attention and turn designer’s concepts into a reality. This is reflected by the number of repeat customers which we have.”