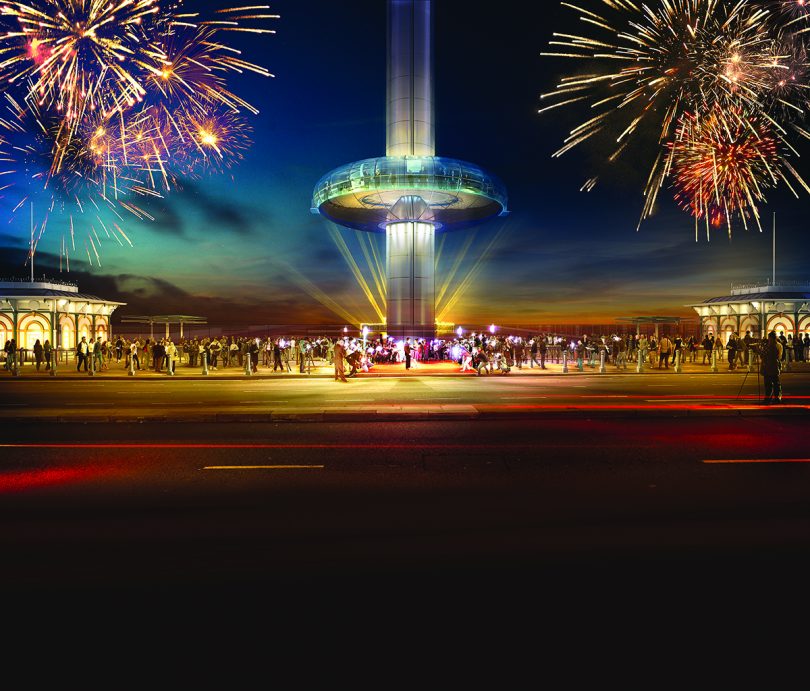 World ‘first’ is a towering achievement 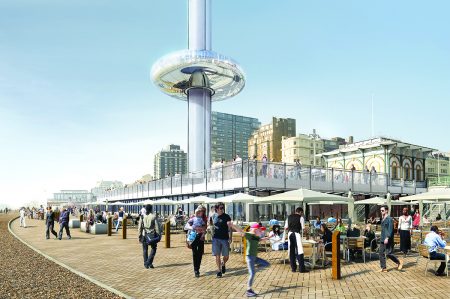 An integral part of what will be the world’s tallest moving observation tower and the world’s first vertical cable car, the glass viewing pod for British Airways i360, conceived and designed by Marks Barfield Architects, was recently completed on Brighton beach.

The construction team attached the final segment to the breathtaking futuristic glass viewing pod which is 10 times bigger than the capsules on the London Eye and can hold up to 200 people. The slender 162 metre tower was completed last summer.

This completion makes way for the last phase of construction before the attraction opens this summer.

Sited at the root end of the historic West Pier on Brighton’s seafront, British Airways i360 has a slender, elegant design, with the futuristic pod allowing visitors to enjoy the surrounding view as it slowly unfolds. The attraction also incorporates a visitor centre with a 400 seat restaurant; a gift shop; children’s play zone; exhibition space; tea rooms; and conference and event facilities.

At 4.7 metres high and 18 metres wide, the viewing pod will gently glide up to 138 metres (450 feet), offering a gradually unfolding view of Brighton & Hove, the English Channel and 26 miles of Sussex coastal landscape. 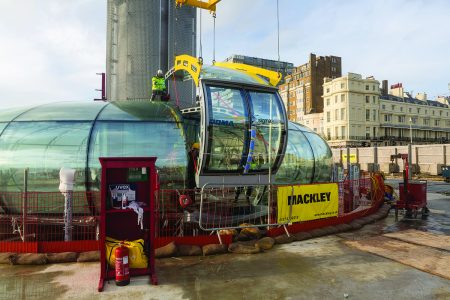 Eleanor Harris CEO of British Airways i360 said: “One of the things that is extraordinary about the project is how similar it is to the initial visualisations. The tower is incredibly tall – and slender too at only 4m wide and looks amazing when you stand next to it. Nothing like this has ever been built before, although the engineering used is tried and tested. The pod is just beautiful – a work of art with its mirrored underside and curved glass.
“Another interesting element is the juxtaposition of this futuristic modern structure next to Brighton’s beautiful 19th century Regency Square residential development. We will also be reproducing the two original 1866 West Pier toll booths at the foot of the tower, which will become our ticket office and tea rooms.
“The way in which the tower was built is also a wonder of engineering. The structure comprises a total of 17 sections or ‘cans’ and was constructed by jacking up each steel ‘can’, then placing the next underneath, until the full height of the tower was reached. Towards the end of the construction, around 1,000 tonnes was being levitated. This method of erection has only previously been used for comparatively small structures such as air traffic control towers.
“Another engineering achievement was making the tower stable in high winds. The tower is clad in a very cleverly designed perforated aluminium cladding which breaks up the wind and there are also dampers (which are typically used for bridges) located all the way up the structure.”

The foundations and substructure of the building and tower consist of bored concrete piles forming a contiguous piled wall, plugged with a mass concrete raft. Having established the final layout in early 2015, the next milestone was to excavate the foundations.

Long reach excavator specialists, WM Plant Hire, visited the project to identify a suitable machine and ensure the production output could be achieved. The 60 tonne long reach excavator played a crucial part on the excavation reaching almost 10 metres deep into the chalk, below the tidal water level.
Huge amounts of shingle had to be shifted from the base of the new tower and WM Plant Hire’s CAT 349 long reach excavator with 20m reach was able to move over 300 tonnes per hour – this high production rate coupled with their experienced operator proved a real asset to the project. 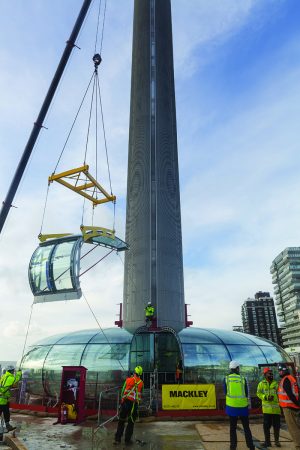 Commenting on the success of the project, Eleanor Harris, said:
“The project has gone really well. The tower is really incredible and was completed ahead of schedule in just 10 weeks, with the glass sides of the pod being assembled in just over a week
“Probably the most challenging phase of the project was in the early stages when we were still in the ground and carrying out site surveys – for example we had to move some major electrical cables, including one that powered the whole of one side of Brighton and Hove and had to move a working Victorian sewer that ran underneath our site. We also uncovered a sea wall that was 130 feet long.
“However the project was definitely worth the effort – it’s just going to be amazing!”

The next key project milestone will be when the team runs test flights for the pod this spring.