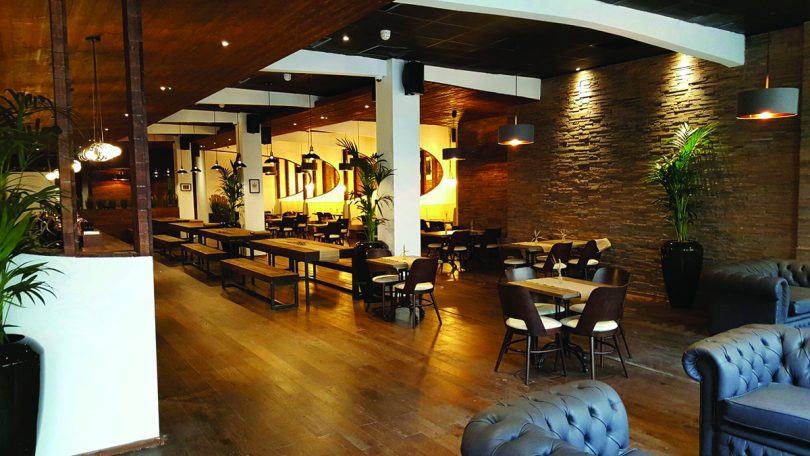 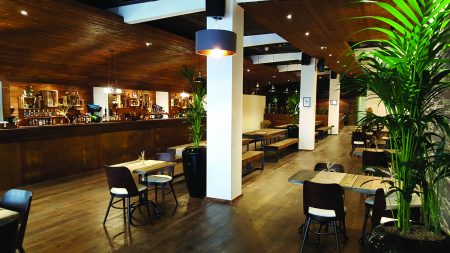 Sophistication meets rustic with the introduction of brand new bar, Barley & Rye, located in Cardiff, Wales. The contemporary bar and diner serves over 80 beers from 20 countries worldwide and a range of speciality whiskeys, with the restaurant aiming to match modern Welsh food with good beer and whiskey.

The site – formerly owned by Glam nightclub – now incorporates tables made from reclaimed wood and lovely leather booth seating, as well as plush bespoke furnishings to promote a very specific feel to the venue.

The concept behind the restaurant and bar is a stripped back theme to represent natural products – hence the title Barley and Rye – referring the very basic products for beer and bread. A rustic yet still swanky design coheres with this theme displaying materials such as brick, stone and various types of wood, complemented by a soft, earthy colour palette.

Cardiff-born Michelin starred chef Gareth Dobbs is currently acting as Head Chef at Barley & Rye, after studying in London under the direction of renowned chef Gordon Ramsey. Impressively, Gareth was also Sous-Chef for Michelle Roux Junior for four years – before returning to his homeland to work in collaboration with the team at Barley & Rye to begin an exciting new venture.

Premier Hospitality caught up with Nathan Gee, Director at Barley & Rye, in order to find out some useful information. Nathan said:
“We went for a rustic wood and brick feel to coincide with the name Barley & Rye, with the transformations having begun in October 2015 and completed mid-January this year. A soft opening took place over a weekend in January and subsequently opened to the public. The opening was excellent; we even had the Lord Mayor down who gave a speech! We also had lots of local business in the area – over 200 people attended.
“The restaurant promotes the use of local Welsh produce and cooking with fresh ingredients. Our chef designed a menu with dishes to complement each beer, in order to provide customers with food and drink matching options. The menu offers venison saddle, a spectacular whole salmon; and traditional desserts such as Welsh cheeses and sticky toffee pudding.
“A Sunday lunch menu is also something that we also developed, with offerings like a generous whole leg of lamb for groups of diners – so it is very much about the theatre of the restaurant as well as serving food and beer.
“As you walk into the restaurant, the space provides a big open feel almost like walking into a huge old beer barrel with a barrel shaped roof. The space gives an elongated feeling to the restaurant, with a large bar on left hand side, and seating for around 120 on the right hand side. The bar service and comfortable Chesterfield sofas are in place for people to relax and have a drink if they aren’t dining.
“Onlookers can see through a serving window and into the kitchen, so people get a real feel for the length of the venue.”
When asked what it means to him to be a part of the new restaurant, Nathan replied:
“I’m extremely excited; Wales is a booming economy at the moment and Cardiff is the beating heart of that economy. From what I have seen the people really have a discerning palette and are looking for a really high standard of offering in terms of food and drink, and we are hoping to add to the dining culture and bring another level of beer and food matching. With the standard of our chef, we are really trying to tempt people into tasting something a little bit different to some of the chains around at present.
“Everybody seems to be really excited that a local chef can bring something back and put it back into the Cardiff economy and community.”

GPC Services was incorporated in 2001 and started in earnest in 2004 by current directors Neil Pates and Nick O’Neil.

As a company, GPC Services build new build houses and apartments, carry out refurbishment work and have carried out numerous commercial refurbishments in and around Cardiff and the South West.

The company completely refurbished the pub and restaurant area of the building. They started with a complete rip out of the original bar and firstly converted it into a pop up bar in readiness for the World Cup. This included constructing a small bar and laying turf to the entire area. Two grand stands were then installed and upon the final whistle of the World Cup, the pop up bar was ripped out and work commenced on what is seen today.
Nick O’Neil from GPC Services Ltd said: “We enjoyed being part of this project because we believed in the final concept. Being part of a success story is always a plus. As a company we pride ourselves on working closely with the client to ensure they achieve their end goal within budgets and timescales.”