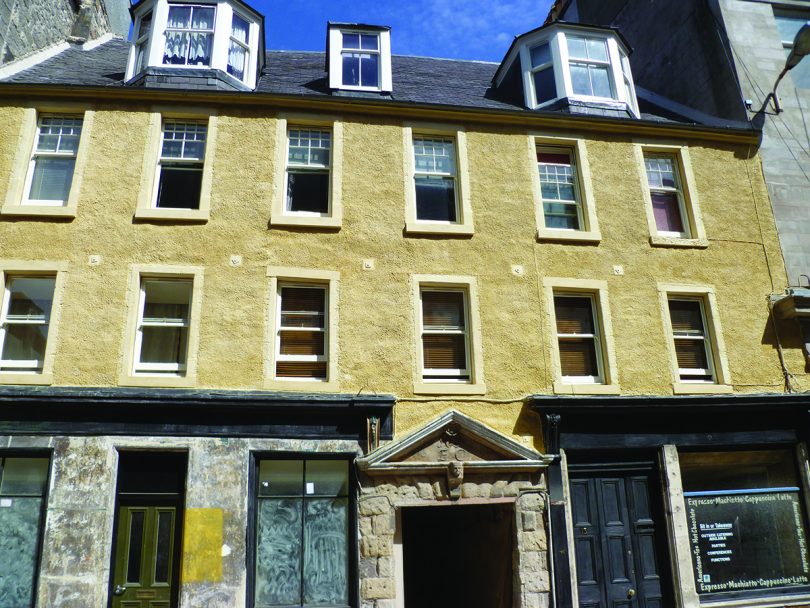 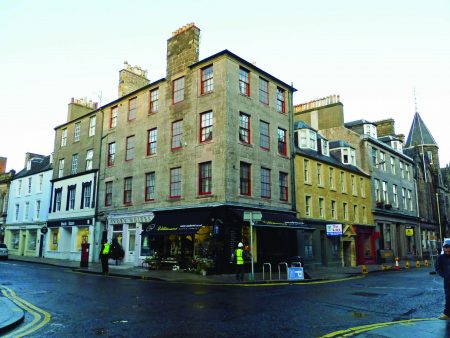 Two of Perth’s important historic buildings which had fallen into serious disrepair have been assured a bright new future, after being expertly conserved and restored by skilled local craftsmen in a major heritage project for the city.

Prominently located adjacent to one another on a corner site at 1-3 George Street and 13-17 High Street, both buildings have benefited from a Perth City Heritage Fund grant towards the extensive renovation needed, in a project carried out for the two Owners’ Associations.

The High Street project has been carried out by AGB, with the George Street scheme being undertaken by One Call Ltd – both from Perth. Both projects were overseen by Cupar based architects, Arc Architects Ltd. Quantity Surveyors were Hamish Bell Associates of Perth.
In George Street, the three storey building, which dates back to the 1790s, also incorporates two shops at ground floor level, with three flats located on the floors above.

The ground floor of the three and a half storey building is now occupied by two shops units with fine Victorian frontages and, with five flats above.
Sara Carruthers, Historic Buildings Development Officer at the Perth and Kinross Heritage Trust said: “Both of these buildings needed extensive repairs as a result of inappropriate materials used in the past and a long term lack of care. Conditions for some of the residents were falling below a tolerable standard. We agreed to give a significant grant to this project as the buildings occupy such a prominent position in the centre of Perth and the owners agreed to a comprehensive and well thought out repair scheme. The projects have both restored the historic character of both these buildings, improved eight flats and brought a shop unit back into use and we were very pleased to see the work carried out by local firms.”

An inaccessible light-well between the tenements, suffering from blocked drains and infested with pigeons, had made one shop unit unlettable for over a decade. With responsibility for this shop through the Common Good, the Council was able to take the lead in forming an owners association and persuading the ten other owners to take part in the scheme. 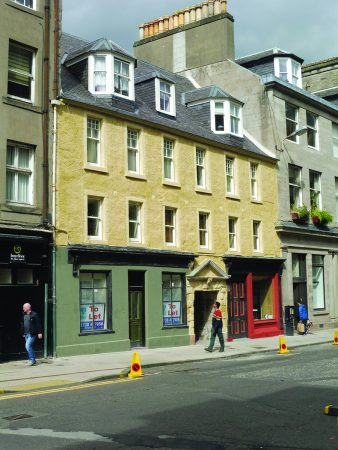 The failing cement render on both properties was removed and was replaced with a traditional lime harl on the older building. The masonry on the other building was found to be in quite good condition once the render was removed and was re-pointed with lime mortar and petrographically matched new stone where new cills and indents were required.

One of the biggest changes to the appearance of the building has been to put back the brightly painted sash and case windows to their original pattern and colour, including all the false windows which were discovered when the render was removed. As Sara explained “This is not to do with window tax – these were part of the original design to give a regular rhythm to the frontages.”

Paul Higginson of Arc Architects outlined major elements of the project: “These included works to the two building’s four chimneys – two of which were required structural repairs, with the other two requiring complete re-building, after a survey revealed that they were actually falling down, with one chimney held together only by gravity,” he said.
“Dormer windows on the High Street building, which were looking very tired with rotting facings and flaking paint, were either repaired and re-painted where possible, or replaced.
“Another interesting element was the restoration of a stone carved head which was mounted in a pediment above the entrance which went through to the rear of the High Street building. The head was in a poor state and we brought in skilled craftsmen using specialist techniques to restore this lovely feature.
“The project has been successful and the future of the two buildings has now been assured.”

Sara Carruthers concluded: “The project has been a great success and has inspired the owners of these and other tenements within the city to begin similar projects.”

Perth and Kinross Heritage Trust have been running the Perth City Heritage Fund since 2012 when Historic Environment Scotland rewarded Perth’s newly gained city status with a fund to assist owners of historic buildings in Perth City Centre and Kinnoull conservation areas. Since then, the fund has awarded over 30 grants ranging from a few hundred pounds to over £200,000 to help owners repair and bring back into use historic buildings in the city of Perth.

AGB is an experienced building and civil engineering contractor based in Perth. The company is renowned locally for its high quality workmanship and excellent customer service and is proud to be living and working in the Perthshire area.

AGB place a great deal of value in employing local people, using local sources in the marketplace and doing its bit in helping sustain the local economy. Recently AGB was awarded the contract in Perth City Centre at High Street to carry out fabric repairs to an historic building – something AGB was delighted to be involved in.

AGB Managing Director, Allan Brown, said:
“We worked with Arc Architects, Perth & Kinross City Council and the Owners of 13-17 High Street to upgrade the oldest building in Perth whilst maintaining its historic features. We want our clients to feel they have had an enjoyable experience from start to finish with a professional company who care not only about the end result but about the whole process.
“At the end of the project, we want everyone involved, from clients and architects to project managers and subcontractors, to feel we surpassed their expectations in achieving their goals and to recommend AGB to their peers, friends and colleagues. We call this ‘The AGB Experience’. We want people to know AGB means Inspired Bespoke Construction with the client at the heart of our business.”

Building contractors One Call Ltd have been in operation for 22 years and recently worked on the George Street Project in Perth, Scotland.

Responsible for work including new builds, house extensions, attic conversions and manufacturing bespoke furniture, stairs, doors and balustrades, One Call Ltd have previously completed work on two public schools in their local area and a historic country house in the Kinross area.

Working on the George Street Project meant that One Call Ltd dealt with the owners of the property, the Perth Heritage Trust and their appointed architects, Cupar architects, Arc. They also supplied all trades including joiners, plumbers, builders, stone masons, those responsible for new windows, new gutters and produced samples for rendering for approval by the client and the architect. One Call Ltd also had weekly site visits with the client and Cupar architects, Arc.

John Garvie of One Call Ltd said:
“The Perth Heritage Trust scheme was a very important project for us with good coverage in the local press regarding our company. As a company we pride ourselves on the quality of site management, the quality of products produced and that we leave the contract to be proud of.”