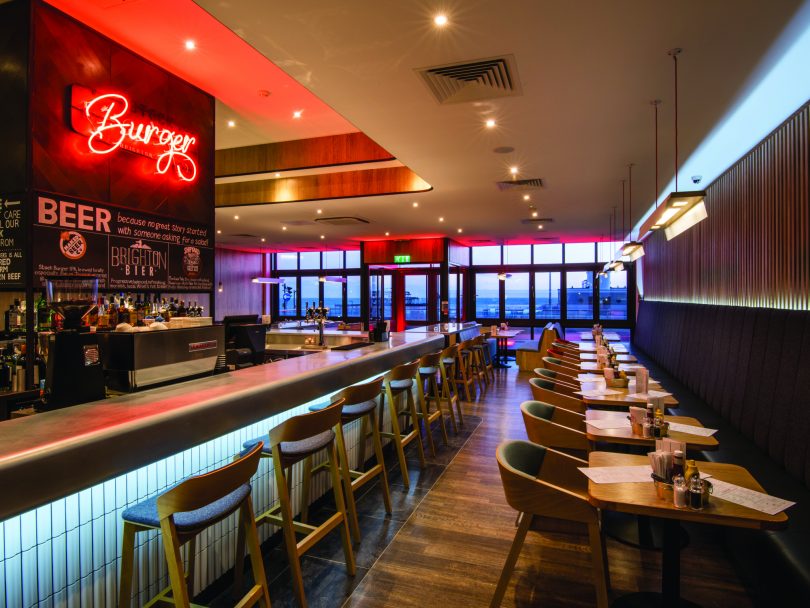 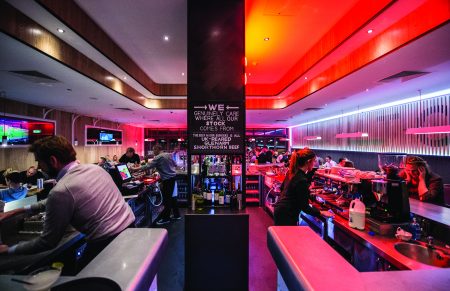 Situated in vibrant Brighton, Stock Burger Co. is the new destination diner presenting the perfect marriage between delicious burger and craft beer, all topped off with a stunning coastal view. Promising flavoursome food with only UK-reared Glenarm Shorthorn beef sourced from farms that Stock Burger trusts, this place really does deliver.

Situated next to the Holiday Inn, the new restaurant has replaced what was formerly a rarely used breakfast room, now presenting a transformed venue with a flourishing concept and stylish interior design. The contemporary restaurant has 122 covers internally, with an addition of 40 covers from the outside terrace.

Premier Hospitality caught up with Ben Webb, Director at SuperFutures, in order to discover the relevant key areas of the project. Ben commented:

“We first discussed the project in March 2015, following this we began onsite and Stock Burger officially opened at the end of January 2016. It was a long process in terms of developing the brand concept; the actual building process was done very quickly.

“There is an existing brand in the United States called Burger theory – we took our inspiration from this and created Stock Burger Co. From there we worked with the IHG team (owners of the Holiday Inn) to develop the branding and extras.

“So it was about giving the restaurant a personality as well as making it look attractive – we had to give it value by creating a brand, so that if Stock Burger Co. was to be taken to another site, people would see the value in it because you’re presenting a brand, an identity, and an interior; so it was about putting it all together as a whole.

“The whole ethos behind the brand is great burgers and craft beer. The focal point in the restaurant is a central island bar that allows people to sit there and have a beer and burger, chat to friends etc. It became this central feature, with a back bar and main signage, and surrounding the perimeter of that there are lots of various types of seating such as the flexible banquette seating, for example. At the window line there is booth seating that looks out to the sea front – the restaurant really benefits from the sea view, adding to the appeal.” 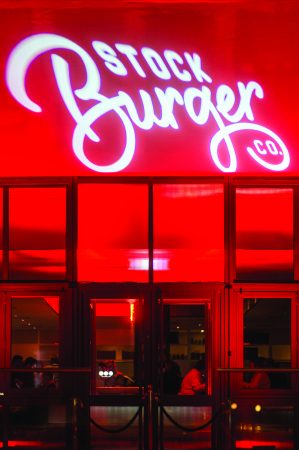 “This restaurant has a real concept behind it, brings something different. The idea with Stock Burger Co. is to create a location for not only people staying in the Holiday Inn hotel, but also local residents and visitors alike – we also wanted a space that had the hotel quality but also felt very casual.

“We incorporated a lot of bespoke lighting, modern furniture that works with the concept and the transition from what was a Holiday Inn hotel breakfast room, to now what is essentially a destination restaurant is a huge leap, and it’s just fantastic. Hopefully it gives Holiday Inn a bit of a boost in the marketplace too.

“A big aspect is the branding, so for us at SuperFutures, as much as possible we’re involved in the branding. With this particular job we developed everything from visual identity to menu, uniform – everything!

“The feedback has been very positive; I think it has gone down very well in the IHG group, as well as with the public.

“It has been fun to work on because there have been a lot of passionate people involved which is great. For us being able to work on a brand new concept is very exciting, because we’re able to control a lot of the aspects and decisions made, but more importantly – just have fun with it! It was quite a refreshing job to work on.”

Crest Leather has been in operation for 20 years and produces high quality finished leather hides, primarily for the contract and upholstery market.

The company has previously worked with clients worldwide on a variety of projects from furniture manufacturers to restaurants, hotels, offices, bars and the automotive and marine sector to name but a few.

Crest Leather recently worked with Stock Burger and supplied them with the required specifications for their new business.

Speaking about their work, James Charter from Crest Leather said: “As we operate our own tanneries in Italy, Thailand and Brazil, we control all aspects of production, therefore ensuring the highest quality for our customers and complete traceability of each and every finished article produced.”