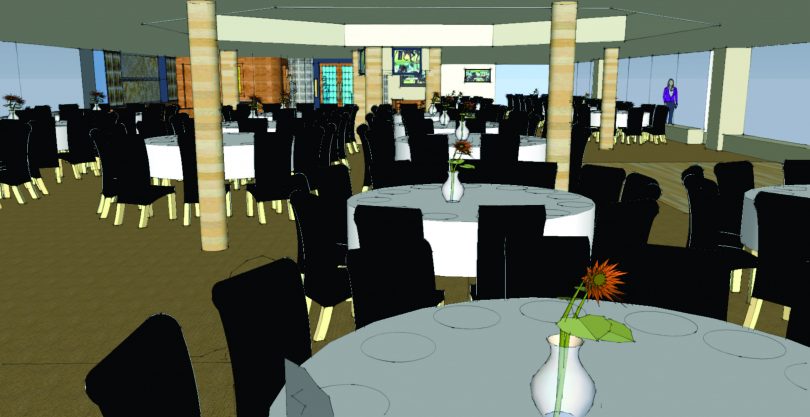 Beverley Racecourse – Off to a flying start

The racing season is off to a flying start at Beverley racecourse in North Humberside this April, following completion of a project to impressively remodel and update the course’s Premier Enclosure entrance, lobby and flagship restaurant.

Peter Dutka said: “Over the last few years my company has tended to specialise in racecourse re-design and after finishing a scheme at Rippon Racecourse, we were recommended by them to the managing director at Beverley Racecourse.

“This is the third year of an ongoing redevelopment at Beverley racecourse. During the first year, we carried out a £750,000 project refurbishing two bars, the whole roadside exterior of the race course and the finishing post tower. Last year we carried out a further £750,000 redevelopment of the Premier Enclosure’s Terrace and 1690 Bars, which were turned into one spacious and elegant ‘super bar’, including a new award-winning casual dining experience.

In the restaurant, the works included refurbishing the whole kitchen, knocking through from the restaurant to an adjacent corporate box and installing a bi-folding screen dividing the two, to provide flexibility for the box to be used either as additional restaurant space or as a separate corporate box.

Peter Dutka said: “The restaurant itself had a very corporate feel and had become a little ‘tired’ with a design that was more functional than design-led. The client is very forward thinking and wanted to expand the racecourse’s income and appeal to include other functions in addition to the 18 racing meets a year – bearing in mind that the restaurant has to compete effectively with high street dining venues.

“The new restaurant design has been formulated to accommodate three types of customers. These are: race-goers (who can purchase a table to return to for use throughout the race day, maximising income from the four or five hours that they are there); companies holding corporate events, and social functions such as weddings.

“Previously the entrance and staircase to the restaurant were not particularly impressive – so we have now installed a wider custom-made staircase. The restaurant itself is a lovely venue with strip glazing to either side – with one side overlooking the racecourse and the other overlooking pasture land.

The project started in January and was completed on programme.

Peter Dutka said: “The Together Group also undertook the two previous phases of redevelopment, so they are familiar with the racecourse.

“This type of project is a complete joy for us, allowing our ideas to flourish, thanks to the excellent relationship between ourselves, the client who is very dynamic and can see the future potential, and the main contractor, who is a very good builder. This has allowed us to really raise the standard of accommodation at the racecourse over the past three years.”

The project is expected to enhance the race day experience for corporate hospitality guests, with a record number of local businesses booked in for the 2016 season.

Refurbishment has also brought about fruitful new partnerships for the racecourse, including Laurent-Perrier, who sponsor the champagne bar and lend their name to one of the racecourse’s most successful evening meetings in June.

In addition, the improvements have helped lift the racecourse’s best-known event, The Journal Ladies’ Day in August, which retail powerhouse St Stephen’s Shopping Centre value as a significant opportunity to promote their Hull shopping destination.

Further phases of improvements are planned, including extending the course’s corporate boxes.