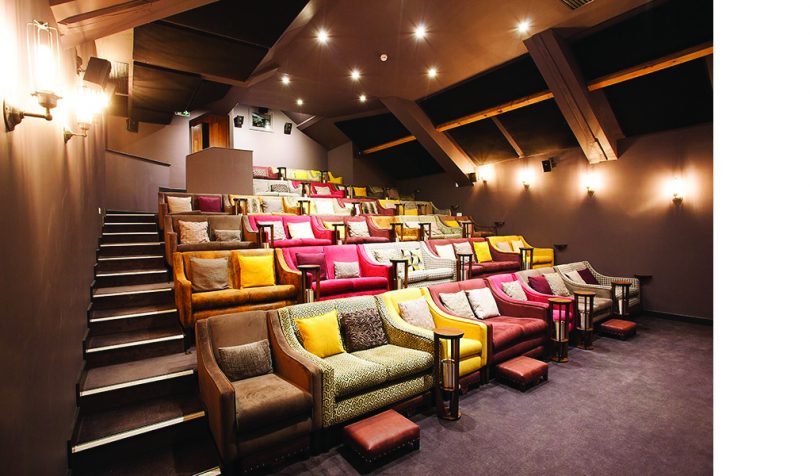 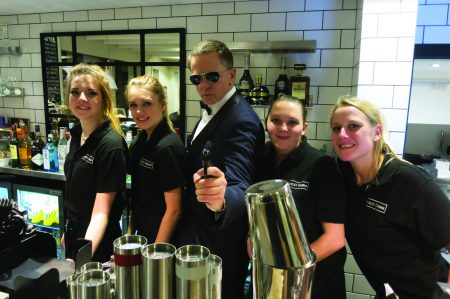 Inspired by a chance visit to a small 57-seat boutique cinema in New Zealand, Europe’s Smallest Ultra 4k resolution single screen independent cinema has opened in Ilkley, Leeds with 15,000 customers passing through the doors since its opening in November 2015.

Distinctly different in design and concept, Ilkley Cinema boasts a state-of-the-art Sony 4K Digital Projector giving a much higher film quality than HD, together with a 7.1 Surround Sound System, which, according to the cinema “achieve a level of immersion so complete, you’ll feel as if you could walk right into the screen.”

Then there’s the fully air-conditioned auditorium with luxurious, roomy sofa seating and tables for glasses, combined with stunning interior design – worlds away from the standard cinema concept. Gone are the cliché soft-drinks and popcorn – replaced by an impressive offering including items such as freshly-ground barista coffee, handmade Mediterranean Tart, a bottle of chilled Prosecco, Risotto Balls and pizza – all delivered directly to the customer’s seat.

Ilkley Cinema’s story began when co-director John Tate, visited a similar cinema whilst holidaying in Wanaka, New Zealand – and realised the potential of opening such a cinema in his home town of Ilkley.

He quickly put his plan into action and, together with co-director John Hewitt,, set about planning the launch of their new venture, after taking over a former nightclub venue.

The project to create the new cinema was carried out by main contractors Dobson Construction, with Halliday Clark as architects. “Dobson Construction was absolutely amazing – they are just fantastic builders and did a brilliant job,” said John Tate.

John Tate said: “With 57 seats, ours is the smallest cinema in Europe, whilst the second smallest, which has 68 seats, is in Rome.”

The cinema is located above a shop on the first floor of a former co-op building constructed in the 1890s, in a space previously occupied by a nightclub which closed around 12 years ago. 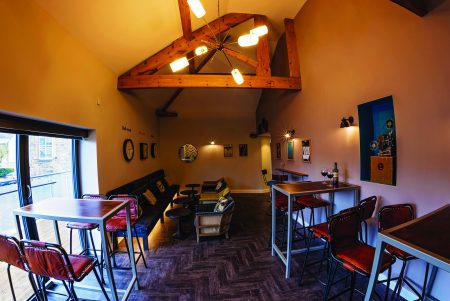 With John Tate as project manager, the construction team took over the space as a shell.

“The construction challenge was to install the raking for the seating, which is a complex steel structure – and also to ensure that the projector is positioned high enough for the screen. Getting the projector image to hit the top of the screen required a considerable feat of civil engineering. This element of the works also involved removing the original king truss beams and replacing these with steel. All of these works were carried out by Dudley Engineering,” he said.

The works also included the creation of the cinema auditorium, which is a bespoke acoustic ‘box’ designed by Spectrum Acoustics and suspended on springs inside the first floor of the building. Sound baffles were also installed, both to contain cinema sound within the auditorium, and also to prevent ingress of outside noise.

John Tate continued: “Due to the building being fairly small, it was necessary to install a new external wall-climbing lift. New disabled toilets also had to be suspended externally on one side of the building. Further works included the installation of a fire escape and reconfiguration of the roof, which was required to accommodate the raked seating and a roof mounted satellite.

In addition to the new auditorium, a new bar and lounge was created. The bar is well stocked and offers at least six different types of gin, whilst the lounge incorporates sofas as well as high seating and tables to create a casual, relaxed atmosphere.

“Internal decor is far removed from the traditional cinema look. We didn’t want to use the traditional reds and golds – in fact red was a ‘banned’ colour! Instead we opted for a contemporary look with brick slips on the walls and a colour palette of greys, copper and white. The interior design was carried out by Bess Sturman of Sturman Wood,” said John Tate.

Dobson Construction Ltd provides construction services to Ilkley, Yorkshire and the surrounding areas. The company’s client base includes medium to large scale Private Domestic, Leisure and Commercial, Housing Associations and the Health Sector.  Dobson’s have a solid reputation in meeting client’s expectations and delivering projects on time, on budget and with quality.

Formerly known as Vincent Dobson (Builders) Ltd, the company has been trading over 40 years and have recently worked on projects including a conversion and refurbishment of Thomas Duggan House in Shipley for Horton Housing Association, an extension and refurbishment of Manor Park Surgery in Bramley and numerous large domestic new builds/refurbishments in and around the Yorkshire Area.  Amongst other projects they are currently on site undertaking a conversion of an apartment building in Settle for Leeds and Yorkshire Housing Association and a new multi-purpose building for New Wortley Community Association in Leeds

As a company, Dobson Construction prides themselves on being “a solid company capable of providing clients with integrity of service and solid construction.”

Dobson Construction recently worked on the Ilkley Cinema project as the principal contractors and was responsible for overall site coordination and for the delivery of the build.

James Rushton from Dobson Construction Ltd said: “The cinema project saw the refurbishment of a local landmark, which was in a dilapidated condition. The cinema itself is a real asset to Ilkley and the surrounding area. Based in Ilkley ourselves, it was nice to have been involved in the project and to assist Ilkley Cinema in providing a facility which will be here for future generations.”