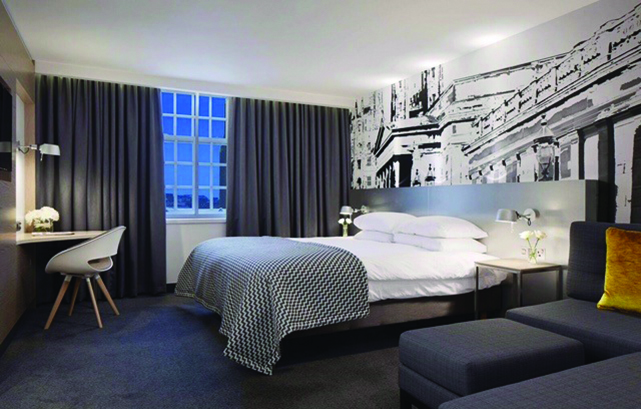 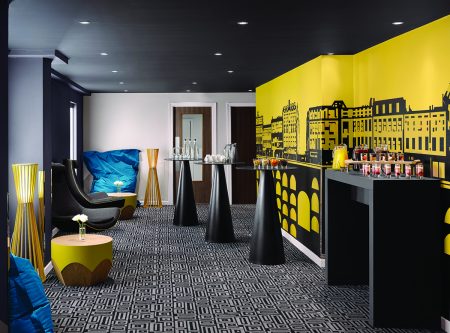 Further upgrading the interior of the Radisson Blu Hotel in Edinburgh, a major refurbishment project has just been successfully completed, creating a stylish new look throughout the hotel.

This extensive project included a full bedroom renovation, together with the refurbishment of the hotel’s meeting and events areas, restaurant and leisure club/spa, with the scheme being phased over two years.

The project was designed by Trevillion Interiors, with G Sharkey and Sons. as main contractors.

John Mather, director of Trevillion Interiors said: “All of the bedrooms were completely stripped out and refurbished from scratch, with the exception of the en suite bathrooms, which were enhanced through the installation of new vanity units, new flooring and new M&E services throughout.

“The bedroom refurbishment included the installation of new case goods, lighting, doors and ironmongery, as well as complete re-decoration using a colour palette of dark grey and white with gold accents. Standard rooms include an amenities area, wall mounted TV, a desk and a seating area, while Business Class rooms include a feature wall depicting rooftop views of Edinburgh and an ‘L’ shaped sofa unit.

“In addition, some of the bedrooms were re-planned to make better use of the space, and several new suites were created.

“The bedroom corridors have also been refurbished and three new lift cars were installed.”

The hotel’s meeting and events facilities have also been a comprehensively upgraded, including the installation of new furniture, carpets, curtains and lighting, together with complete re-decoration, the enhancement of air conditioning systems and the creation of enhanced break out areas with drinks and snack facilities. 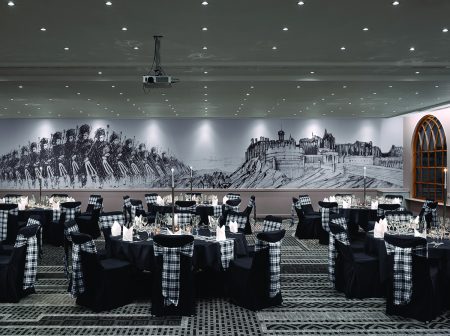 The leisure club and spa (now re-named The Melrose Spa), on the lower ground floor, has been dramatically upgraded through a strip-out and extensive renovation, and has been completely re-designed in terms of layout and facilities, providing a larger gym, the creation of a new reception area and the addition of three new treatment rooms, sauna and steam rooms, as well as the creation of a new secondary entrance from the Royal Mile.

The only remaining original feature is the swimming pool, which was completely stripped out and re-tiled. The pool area was also upgraded with the addition of new floor finishes, wall tiles, ceilings and lighting. All new changing rooms have been installed, together with new fixtures and finishes. In addition, a new sauna and steam room have been installed, together with new lockers.

The restaurant area has also been enhanced through complete re-decoration, the installation of new furniture, refurbishment of the timber floors and the addition of a dramatic and colourful new two storey feature wall. Here the colour palette includes neutrals and a new mulberry accent shade.

“The project has been relatively smooth with good communication between the design team, client and contractor,” said John Mather.