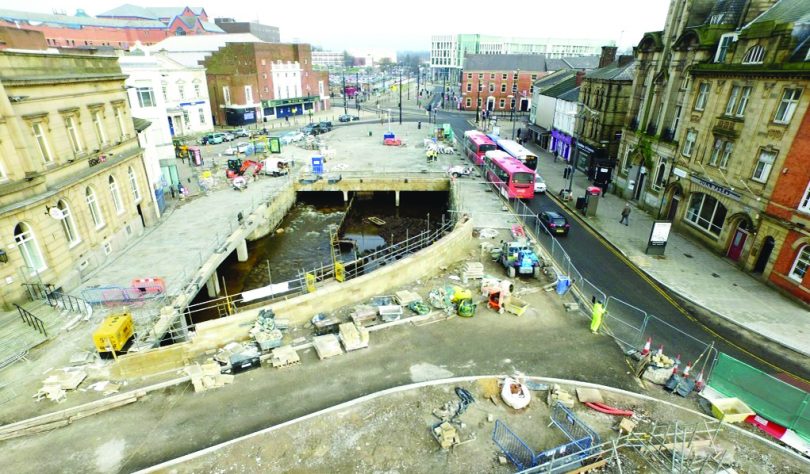 River Roch – New ‘jewel in the crown’ for Rochdale 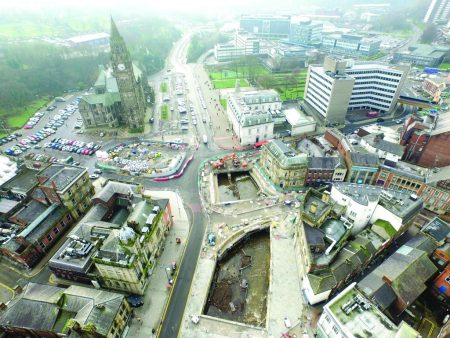 The transformation of a key part of Rochdale town centre is nearing completion, in a project which has uncovered sections of Rochdale’s River Roch, revealing its stunning 800 year old medieval bridge, which has been hidden from view for over 100 years.

The £4.2m Revealing the Roch project has uncovered two sections of the river – one on The Butts in front of the HSBC Bank, and the other on the Esplanade close to Barclays Bank.

The project makes Rochdale the only town in Greater Manchester to benefit from an open river running through the heart of its town centre.

Contractors VBA Ltd were appointed to carry out the painstaking work for Rochdale Metropolitan Borough Council in a project which commenced last April and is expected to complete at the end of April this year.

The project has been supported by the Heritage Lottery Fund, The Environment Agency and the North West Regional and Coastal Flood Committee.

After a series a modern load-bearing tests, engineers from Rochdale Council and the Environment Agency established that the pre-1600s bridge meets modern safety standards and will be opened to the public and traffic.

Heritage is a major strength of Rochdale, with its magnificent Grade I listed town hall and lots of listed buildings within the surrounding conservation area.

John Percival, Capital Programmes Manager at Rochdale Metropolitan Borough Council said: “A major benefit of exposing the historic bridge and re-opening the river is that it makes a lot of sense of the town centre’s heritage and the way it is laid out.

“For example, before the new openings were made, you could stand on The Butts and wonder why the buildings were aligned in in this particular way, as there was no visual reference to explain it. But once the river had been opened up, it was possible to understand the reason the building for the town centre layout.” 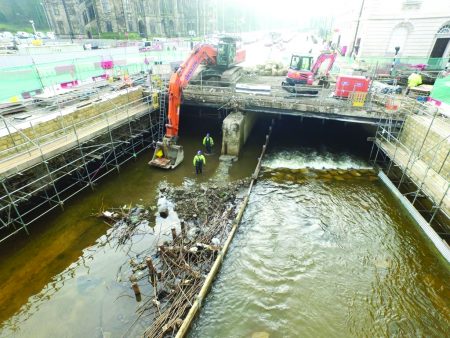 The project also enhances the visual scale of the heritage buildings and tells future generations a story of Rochdale which has been concealed because the bridge was not visible. For example, the story of the woollen trade on which Rochdale initially built its wealth, where woollen cloth would come from the Pennines, Yorkshire and other areas, down Rochdale’s Yorkshire Street, across the historic bridge and through to the fulling mills by the river to be finished before being exported.

John Percival outlined other benefits of the scheme: “Amongst the many other benefits of this project is that it helps protect against flood risk in the town centre and also to re-naturalises the river where it passes through the centre of Rochdale. We are achieving this by putting breaks in the original concreting which was laid along the river bed at the turn of the century to prevent erosion. This meant that the water passed through very quickly, preventing any natural species from becoming established. The breaks will allow this to take place by letting sediment gather.

“The scheme demonstrated its effectiveness in flood protection on Boxing Day, when the river surcharged at the entrance to a culvert outside the council offices and quickly travelled overland across the town centre.

“It was a good job that we had reached the stage that we had with the openings in the culvert, because that water that came out of the culvert entrance went back in again where we had opened up the channel. This meant that the scheme met its flood protection objectives, preventing the town hall and the post office from flooding.”

The project also aspires to addresses climate change issues through creating an urban ‘heat sink’ which will allow the river to cool the town centre as it passes through.

The scheme has run smoothly despite challenges including working within a conservation area on very confined site in an area bounded by buildings – some of which are listed. Another key challenge of the project was ensuring as little disruption to business and normal life as possible.

These constraints meant that the project has been carried out in a linear way – starting at one end of the scheme and finishing at the other. It has also meant that particular techniques such as sectional flight auger piling had to be used whereas the project team would have preferred to use continuous flight auger piling, but simply could not get the machines in to do it. In addition, most of the site work is below ground which involves some element of risk and the need to work safely.

“Although all this slowed up the project slightly, generally these challenges have been overcome and the work has gone really well,” said John Percival.