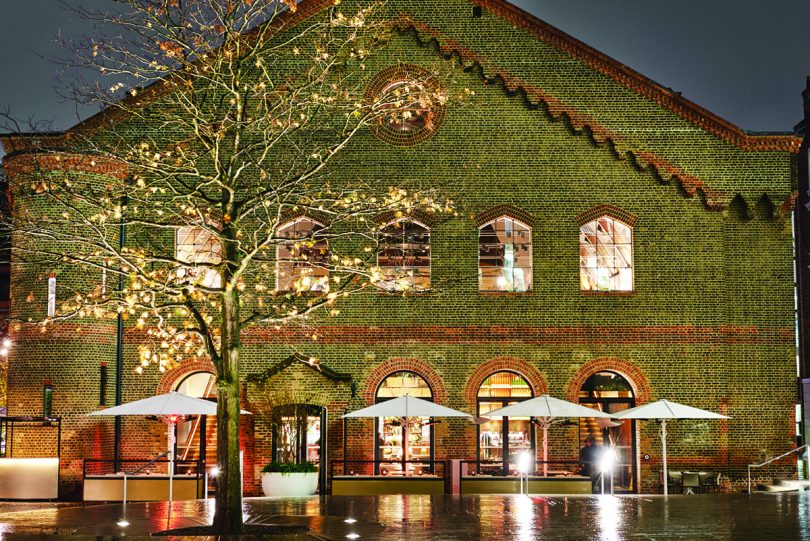 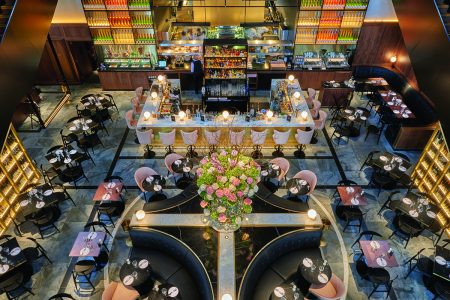 Originally constructed for the German Gymnastics Society, the building was the birth-place of the National Olympian Association and held the indoor events for the first games in 1866. Designed by Edward Gruning, the building was England’s first purpose-built gymnasium, with funding coming solely from London’s German community.

The beautiful building ceased to be used as a gymnasium pre-war and was subsequently used as offices, storage and an arts and exhibition space.

D&D London acquired the German Gymnasium site in January 2014, and after extensive planning, restoration, design and construction, the venue opened in November 2015.

The interior of the building, located between King’s Cross Station and St Pancras International, has been designed by Conran and Partners, who worked with the building’s key original features to create a space that evokes the heritage of this London landmark.

The décor is a contemporary take on the grand cafes and brasseries of central Europe.

Influenced by the building’s original purpose, playful gymnasium details also filter through the overall design. Gold mesh screens inspired by Victorian detailing and fencing masks are featured, while original fixtures such as climbing hooks have been retained in the ceiling of the awe-inspiring triple height space.

The open pass and windows overlooking the street invite commuters and diners to view the grand main kitchen, completely rendered in black, above which sits a separate kitchen serving the upper dining area, which has a dramatic double-height mirrored glass façade.

David Loewi, Managing Director of D&D London comments: “While developing the food and drink concepts, we have respected the history of the site. Germany is well established for its wine, yet its cuisine is often underrepresented in London. We aim to help change this by featuring some delicious dishes from Germany and its surrounding countries.”

Des Gunewardena, Chairman and CEO of D&D London adds: “We’ve watched and admired King’s Cross coming to life in recent years and are so excited to finally become part of it. When I first saw the German Gymnasium building stripped out, revealing the interior with its 57 ft floor-to-ceiling heights, I had the same spine tingling feeling I had when I first saw Quaglino’s as a hole in the ground 25 years ago. We love this building and its history. It deserves an exciting life in the 21st century and we are going to do our best to give it that

“I’m very confident in the outlook for London. The building cost is high, so we’re going to have to work very hard to pay that back. But it is classically what we do: taking interesting buildings and bringing them back to life.

“Although we’re in Paris, New York and Tokyo, at heart we are still a London business. We know London. It’s a city that will always have its ups and downs, but it is one of the great cities of the world and it’s a good place to invest. It’s our home.”

Conran and Partners project director Tina Norden has said the look is one of refined, industrial luxury. She added that the project is “A focal point of the overall development of King’s Cross,” and that “The fact that it is a free standing building and one of the only listed buildings on the site makes it really special.”

The dining areas combine one of Kings Cross’ largest al fresco terraces, a patisserie counter, an all-day grand café serving breakfast through to dinner, a first-floor restaurant and the Meister Bar, playing Berlin beats until 1am.

The Grand Café on the ground floor offers all day dining, with a modern European menu, including German classics and a comprehensive grill selection. Signature dishes include beef goulash soup with bell peppers, sour cream and paprika and pickled Bismarck herring with onion, apple and Vollkornbrot. There is also a choice of German sausages such as Nürnberger Rostbratwurst or smoked Schinkenknacker, served with sauerkraut and potato purée or pommes frites; and sharing dishes such as roasted Creedy Carver free range duck from Devon, served with braised red cabbage, dumplings and orange sauce.

The Grand Café is set to become Kings Cross’ favourite spot for both leisurely weekend brunches and quick healthy breakfasts, with dishes including Chia pots with coconut and almond milk, vanilla, pomegranate and lemon balm as well as a selection of energising smoothies.

The patisserie counter showcases freshly baked breads and pastries, including sour cherry and pistachio buns or Berlin Doughnuts with jam, all available to take away. Further breakfast treats include the potato rösti with fried eggs and The GG Breakfast, a full English with a German twist.

A clock chimes at 4pm daily, signalling the beginning of the German tradition of Kaffee and Kuchen. Guests will be offered cakes and pastries such as apple strudel with vanilla sauce; Sachertorte with Chantilly cream and twice baked cheesecake with blueberries. Guests will also be able to choose from speciality coffees such as the Black Forest coffee with Kirsch and whipped cream and the Pharisäer coffee with dark Jamaican rum. 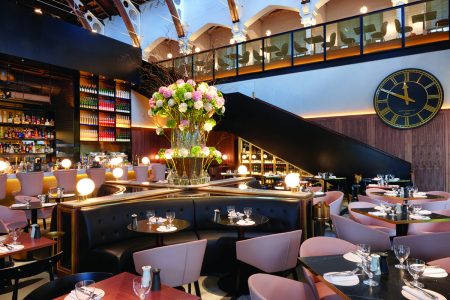 Head Sommelier, Virgile Degrez, has curated a list that will take wine lovers on a virtual tasting tour along the Danube vineyards showcasing niche German, Austrian and Hungarian labels, as well as a selection of bottles from Eastern Europe. Guests can also sample the regional sparkling wine, Sekt, as well as German wine flights, and a wide range of speciality wines by the glass via the Coravin Wine System.

Fred Tartas who manages the Meister bar – open till 1am at weekends – has designed an innovative cocktail menu, including the multi-sensory concept, Le Whaf, a special carafe that vaporises cocktails turning them into dramatic, low-calorie clouds. Signature cocktails include the Absolut Elyx with cucumber, lemongrass, ginger cordial and lemon juice, served in a coupette glass with a mint mist.

D&D owns and operates more than 30 establishments in the U.K., France, the U.S., and Japan, as well as the South Place Hotel in the City of London. Restaurants in London include Kensington Place, Launceston Place, Madison, Paternoster Chop House, Plateau, Quaglino’s, Sartoria, and Skylon. D&D also owns Guastavinos, located under the 59th Street Bridge in New York. 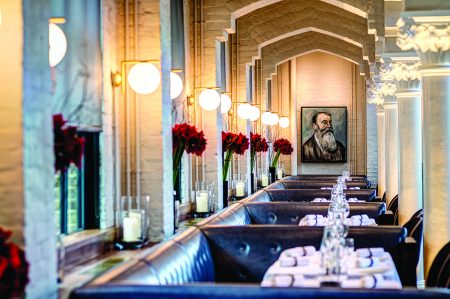 Surfaceform specialise in the design and creation of high quality bespoke wall finishes for use within commercial interiors. The company has been in operation since 2003 and within this time have worked with many prestigious names, including Selfridges, Jimmy Choo, Harrods, Google, One Hyde Park, Estee Lauder, BP and Marks & Spencer, amongst others.

Recently, Surfaceform has been involved in German Gymnasium after being approached by Conran to create a bespoke textured plaster finish that would complement the beautiful surrounds of the restaurant. The finish was designed specifically so the lighting highlighted the unique texture.

“We were delighted to have been involved in this impressive project as we felt the style of the surroundings would complement our plaster finishes. Working with Conran and 3 Interiors was a pleasure.”

“We take pride in our ability to deliver a diverse range of surface finishes using traditional and new processes to deliver the latest ideas. All surfaces can be tailored to individual needs.”