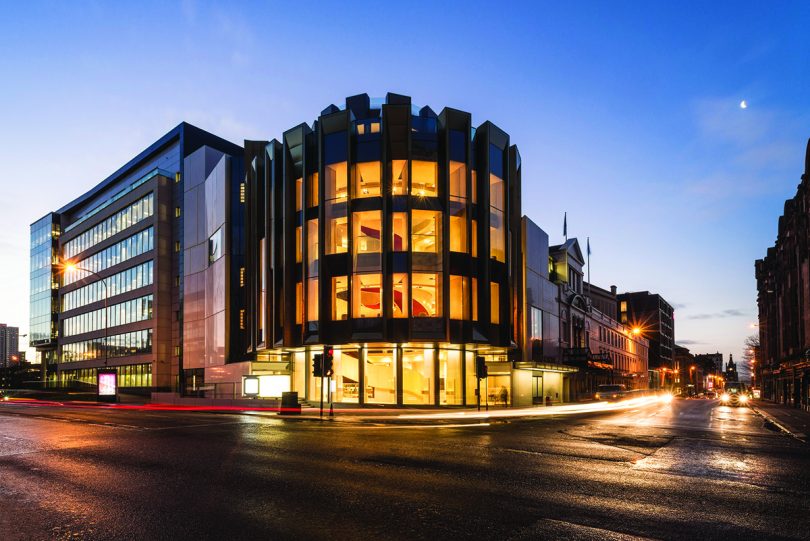 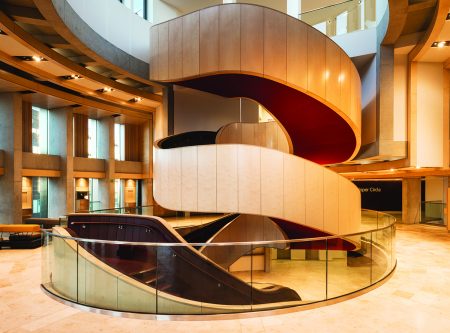 Work has been undertaken to dramatically improve the public spaces at Theatre Royal, Glasgow. This has included the building of spacious foyers, which house facilities such as a new box office, better bars, more toilets and a roof terrace, and the installation of new lifts has opened up access, meaning that for the first time in the theatre’s 147 year history, all audience members can reach all levels.

Members of the public can also enjoy the theatre during the day in the new café – Vanilla Black at the Theatre Royal. Purpose-built education rooms, supported by The Robertson Trust, have been created and provide much-needed space for education and outreach activity run by Scottish Opera and The Ambassador Theatre Group.

Premier Construction Magazine caught up with the General Director of Scottish Opera, Alex Reedijk, to discuss the redevelopment project and its short listing for two RICS awards.

What work was done on the Theatre Royal?

Scottish Opera acquired the theatre about 40 years ago from STV and did a lot of work in the auditorium and backstage.  Then, when I started 10 years ago, I bumped into a lot of audience members who said they love coming to the theatre but it is a shame that there aren’t any lifts, the toilets are Victorian and the bars are crowded at the intervals. There then came an opportunity in 2008 to acquire a small piece of land at the northern end of the theatre, so Scottish Opera acquired that site with a view to protect the opportunity for the future. Glasgow then won the right to host the Commonwealth Games, so it struck the company that here was an opportunity to join together Scottish Government and Glasgow City Council aspirations for the built environment. We then ran a fundraising campaign to look at building new foyers and public spaces as well as raising money for it.

When did work officially begin on the project?

Work officially began in the summer of 2012 and was completed in December 2014. 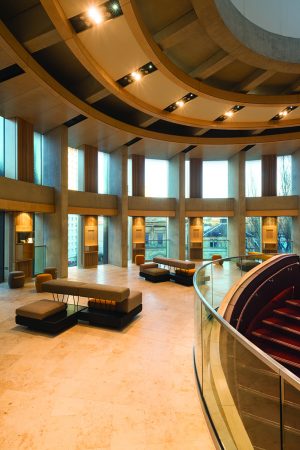 What has the feedback been about the re-developments?

The feedback to this day has been amazing. Because of the dramatic nature of the spiral staircase and the relationship between the staircase, the light and the general arrangement of the building, it is a very theatrical companion to the 19th century auditorium. The spiral staircase is incredibly eye-catching, as a beautiful ribbon that weaves its way up the building. More importantly what we see is that the development has brought about connectivity with the audience. All of the technical aspirations were met but on top of that we have delivered a building with a wow factor.

The project has been short listed for two RICS awards – one in Community Benefit and another in Tourism and Leisure. How important is it to you to be nominated?

It is hugely important and, in terms of Community Benefit, I think for me that nomination signals that one of the many discreet objectives of the project has been achieved. The previous public spaces were very small, Victorian and undemocratic so, when you came in, the posh people would have the grand stairs and the less posh people would have the less grand, steep stairs up to the gods. So in a way we have democratised the building and opened it up, so it no longer appears to be a place of mysterious ritual, but anyone walking past can see in and see what we do.

The other important factor relating to community is that the new development has a relationship, not only with its auditorium but with the rest of the immediate built environment. It is sensitive to the tenement building  across the road and it is an amplification of the best traditions of Glasgow, including the wonderful Glasgow bay windows.

We have seen a 260% uplift in the number of people who purchase disabled seats since we have re-opened the theatre. The good thing is that we have been able to get wheelchair positions on all four of the levels, as opposed to just the stalls level.  Patrons don’t need assistance from any ushers or any other interventions to come into the building, to get to the lifts or any level. We have therefore successfully democratised and enabled the disabled access.

On a personal level, from taking this project from what it was to where it is now and being at the stage where people are noticing it and that it is being nominated for awards, what does that mean to you?

I’m hugely proud of the outcome, and of all of the consultants that have been led by the architect’s team. I think we had an exemplary team that really wanted this project to happen. I am proud to have been the client of a team of consultants that was mature in approach and believed in the building and, furthermore, I am really proud of all of the folk who helped to enable this project which will benefit the people of Scotland for hundreds of years.

None of this would have happened if the Scottish Government and Glasgow City Council hadn’t wanted it to happen and if all of the supporters, foundations and trusts hadn’t agreed it was a great idea. Nor without the great team of consultants and indeed a strong construction company in Sir Robert McAlpine, who saw the project through. In the end we got there and it is a fantastic building, which our audiences adore.