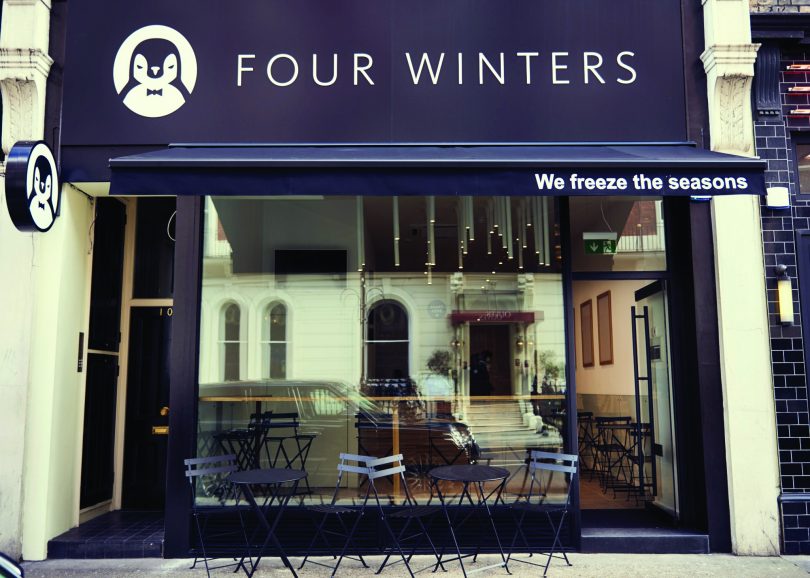 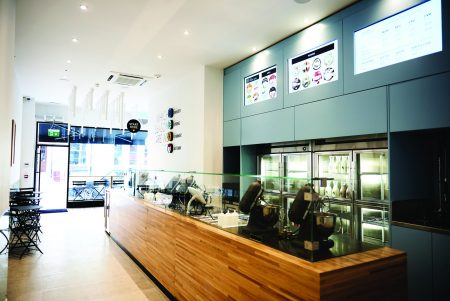 The new parlour is situated on the ground and basement floor of a former hairdressers located opposite Gloucester Road Tube Station.

The stunning new venue – one of the largest ice cream parlours in London – enables customers to experience ice cream inspired by the four seasons of the year and to watch it freeze instantly thanks to liquid nitrogen.

The dynamic new interior space includes: a ground floor sales, serving counter and seating area; a Four Winters corporate design central preparation kitchen (which will also be used for all future London stores); The flavour vaults (housing the ice cream base fridges which are on display to customers); toilets; staff accommodation including offices, a breakout area and toilets, and storage space.

Principal contractors for the project to create Four Winters were TBICC Limited (also known as Tatanaki Brothers Construction); architects were Jordanian firm Syntax Digital, who work with Four Winters headquarters on all projects.

Works on the project involved the comprehensive strip out of the entire internal space and extensive refurbishment and remodelling.

This included: joist re-enforcement of the entire ground floor; the laying of new flooring throughout and the installation of new wiring, plumbing and electrics, including new lighting, illuminated signs and ceiling speakers.

Other works comprised: services installation, including CCTV and IT; the erection of partitions and the creation of offices in the basement, as well as the creation of an accessible restroom for customers.

Technology is also a key feature of the new interior. According to Omar Al-khawaja owner of the Four Winters UK franchise, who said:

“We have 13 eyes in the sky, app beacons at the entrance to detect a customer who has downloaded the four winters app when walking in, built-in ceiling speakers linked to radio and our media dock, and LED screen menus on top of the counter. The place looks and feels like something from the future! Yet we maintain the brand and family feel that our customers love.”

He added that the project to create the new parlour has been a resounding success:

“There was a tremendous effort from all parties to collaborate and achieve what we believe is an amazing retail space with a great feel and artistic installations, while maintaining efficiency and maximum utility of the space. Four Winters UK is a venture we have worked very hard on and we are absolutely thrilled to finally be able to bring this amazing concept to Londoners.”

The project commenced in November 2015 and was completed in March 2016.

Liquid nitrogen ice cream is now the latest dessert innovation in countries including America, Sweden, Jordan and the UAE. 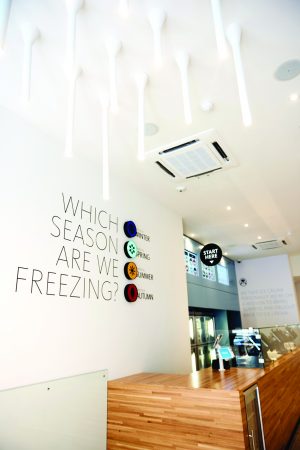 According to Four Winters:

“We realised that the world has had enough of overly-processed, mass-produced ice cream that sits frozen for days and weeks in a metal tray.

“Our ice cream chefs use local seasonal produce which they transform into liquid combinations bursting with flavour, which are then kept cooled in the flavour vaults of our store.

“Each ice cream serving at Four Winters is created one cup at a time, using liquid nitrogen technology (basically liquefied air with a temperature of -196˚C) to freeze each order on the spot.

“Our ice cream revolution brings together culinary art and innovative technology to deliver an unbelievably creamy, flavourful and rich product.”

Flavours include everything from vanilla, chocolate and coconut to more adventurous combinations such as strawberry lavender, afternoon tea, honey and spicy honey brittle, and peanut butter cup.