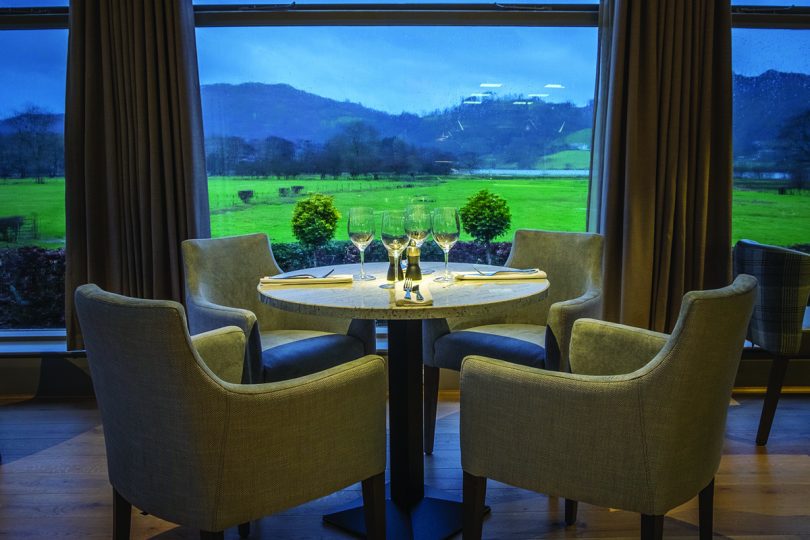 Grand at Grasmere – Transformation on a ‘Grand’ scale 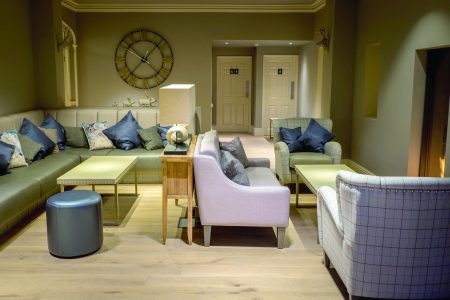 Delighting the owners and customers alike, an iconic Lake District destination hotel, Grand at Grasmere, is being transformed in a major ongoing refurbishment involving almost every room.

The hotel’s ground floor refurbishment has been completed to an impressive new standard, and the bedroom upgrade is ongoing.

The project is being carried out for Richard and Mandy Webb who own The Grand Hotel and its sister hotel Grand TwentyTwo, both in Lytham St Annes, having bought the Grand at Grasmere (formerly The Golden Rill Hotel) in February 2015.

Richard Webb, who is the third in a family line of Webb hoteliers, said:

“The Grand enjoys a fantastic position, but it was looking a bit tired and needed updating to make it modern and contemporary. Our aim was to give it a ‘ski-lodge’ feel and to bring the food and beverage service into connection with customers, so that staff could be at the front of house all of the time.”

The transformation of the ground floor includes the creation of a brand new open kitchen and bar along with all new furniture, as well as the introduction of a transformed restaurant and lounge and a new reception area, whilst upstairs the refurbishment of nine of the hotel’s 30 bedrooms has been completed in a rolling programme.

The new interior has been designed by the owners and features a colour palette of pale greys and neutrals throughout, with new solid wood flooring having been laid in many areas on the ground floor. Other flooring finishes include carpeting in the lounge and stone tiling in front of the bar and the open kitchen.

Another special feature on the ground floor and in upstairs corridors is a state-of-the-art computer controlled lighting system to programme lighting changes at different times of the day to create an ambient atmosphere. 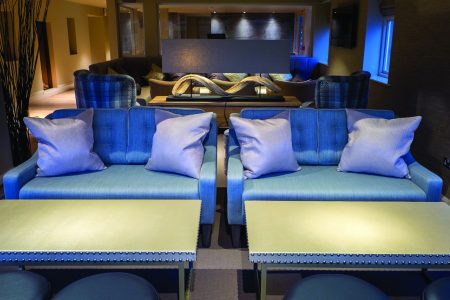 Tom Webb, son of the owners said: “The project has utterly transformed the building – it is simply not the same hotel as it was before. The work has gone very well, we are pleased with it and the refurbishment has also been very well received by our customers.”

He added: “The whole of the ground floor has been remodelled so that it has become one stunning large open-plan space, rather than separate rooms as it was previously.”

Located just to the right of the front door, a new boot room has been created, offering the perfect place for drying and storing walking gear and cleaning off boots, and includes a boot cleaner and a heated, ventilated boot rack designed to keep boots fresh, dry and warm ready for the next day’s trails.

A new greeting and reception area has also been created, including the installation of a new reception desk and seating.

The lounge has also been completely re-designed and remodelled, including the introduction of new seating comprising wing back armchairs, coffee tables and sofas, as well as a new double sided fireplace, which is visible from the reception area as well as the lounge.

In the bar area, a new bespoke bar made by CHR has has been installed, and features stainless steel worktops. Feature beer pumps are suspended over the bar, whilst the back bar incorporates a colourful, mirrored display of spirits. The latest style glass fronted Gamko fridges have also been installed behind the bar, as well as a new Nespresso coffee machine.

New barstools, chairs and tables have been introduced, including high seating areas, as well as a bespoke cutlery unit (the bar and kitchen areas have two stations for cutlery, menus and condiments).

An open kitchen where diners can see their food being prepared has been positioned as a centrepiece in the middle of the Cafe Grand restaurant area, which benefits from superb lakeland views.

The all-electric kitchen, designed by CHR, is quite spectacular in itself, incorporating the latest equipment, including two induction planchas (which allow for a highly efficient and healthy method of cooking), plus two multi-point induction hobs and the latest MKN ovens.

New dining furniture has also been installed throughout including bench seating and chairs, and tables of various sizes to accommodate anything from two people to larger groups of up to 10.

New furniture including seating and parasols has also been added on the outdoor dining terrace.

The refurbishment has allowed the hotel to introduce a new style of dining and service to Grasmere. In the new restaurant, signature dishes include Thai green curry and duck breast, with Pork belly, lamb rack, steak and ale pie, red lentil dahl, chicken supreme and many fish dishes including seared sea bass, salmon fillet and halibut steak amongst the many other offerings that change seasonally.

According to the owners:

“Cafe Grand is not your usual hotel restaurant. We have a relaxed approach to dining, giving a vibrant, country lodge atmosphere. Cafe Grand At Grasmere boasts stunning uncompromised views of Lake Grasmere and its surrounding fells, a fabulous outdoor terrace for al-fresco fun and a fully open kitchen where you can watch the chefs at work.”

Other works on the ground floor include the complete refurbishment of the toilets, including the installation of new Porcelanosa fittings.

Upstairs the hotel’s nine Superior Suites have been refurbished, with the remaining 21 Standard rooms being renovated in an ongoing rolling programme which will be completed in 18 months. All of the ‘Superior’ rooms have undergone a complete refurbishment and are decorated in a contemporary country house style, featuring the same colour palette of greys and neutrals used on the ground floor. 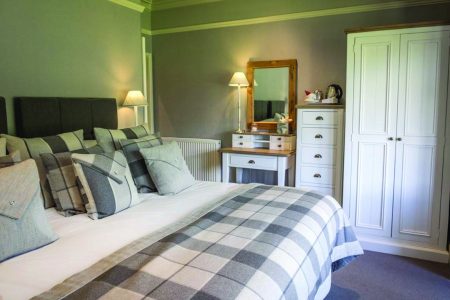 The results have been spectacular, with the new rooms looking plush, modern and comfortable.

Tom Webb said: “In the Superior rooms, we have installed all new built in furniture and re-arranged the layout wherever possible to make the most of the stunning views from the windows. For example, in some rooms we have put the bed in the centre of the room directly facing the window, so that it becomes like an ‘island’ in the space.

“New furniture and carpets have been introduced and the rooms have been completely re-decorated. The works also include the upgrading of most of the ensuite bathrooms, including fixtures, fittings and tiling. In addition, individual heating controls have been installed in each bedroom.”

The corridors have also been re-decorated and re-carpeted.

Future works on the project include restoring the building to its former glory, removing flat roofing to create beautiful balconies overlooking Lake Grasmere and the surrounding fells and creating new luxurious larger rooms throughout the main building and the lodge by removing partition walls, installing new staircases and opening up windows to make the most of the views.

The hotel closed on 23rd November while the downstairs works were being carried out, re-opening on 16th December. The venue remains open during the bedroom refurbishment.

The investment means that a total of five new jobs have been created, in addition to the existing team of 25.

Mahoney Contracts have a vision to work ethically to the highest standards with customer focus and care as their priority.

Having grown through dark days of recession, Mahoney Contracts put their success down to trusted hardworking relationships with high calibre clients, architects and surveyors – as well as to maintaining the highest standards of workmanship, quality, competitive pricing, value for money and a commitment to complete all projects on time.

Mahoney Contracts Limited was established in 2009, with a head office located in Whitehills Business Park Blackpool. The company offers construction services to established and new customers throughout the UK.

Premier Hospitality caught up with Richard Butcher, of Mahoney Contracts, who commented:

“Our management team has substantial experience delivering construction projects and the company has achieved significant growth since it was established which is attributed to providing value for money for customers and the dedication and commitment of our management and staff who take pride in delivering quality projects on time and to budget.”

“Mahoney Contracts Limited was the principal contractor for the Grand Hotel Grasmere refurbishment project. We consulted with the customer through the project planning phase to develop the solution and delivered the project in short timescales to a high quality standard on time and to budget.

“Our strategy is to continue to grow and develop long term relationships with our customers and suppliers; we welcome opportunities from current and new customers to develop business proposals and innovative solutions to new challenges.”