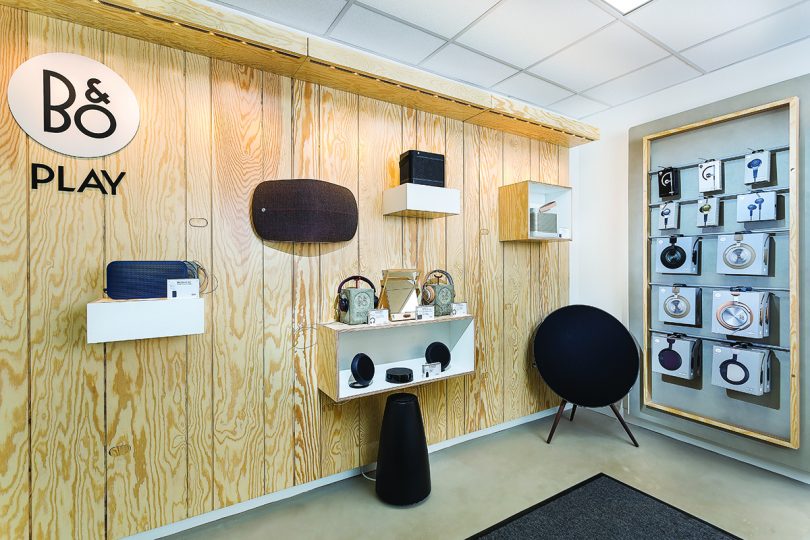 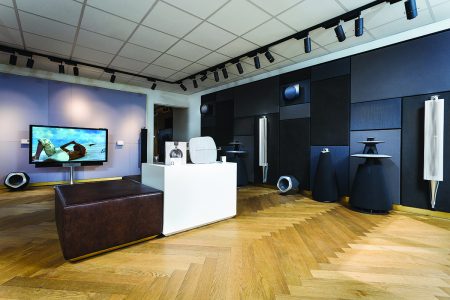 Bang and Olufsen stores around the world are set to get a makeover as the company rolls out a brand new store concept. The new concept, which is described as a “sensory store concept,” will hopefully be in the majority of stores globally within the next two years.

Paul Sands, Director for Retail Development and Customer Experience at Bang & Olufsen commented: “The new concept replaces a design concept we have had for a long time. The sensory store will roll out across the whole world and it is very different to what it is replacing. What we are trying to do is make it very obvious that when you walk into a store, it is not a conventional audio visual retailer.”

With the new concept, the company is working on five key areas to ensure that not only the store concept changes but the customer experience within the store also changes. The five key areas targeted by Bang and Olufsen are:

Sense of Craftsmanship – This is about the attention to detail in the product and the design of the store itself. For example, the attention to detail given to the acoustics is a good example of that. The wooden floor and special acoustic panels were chosen to make the speakers and TVs sound awesome and it is that level of detail that the company is looking to achieve.

Promote Curiosity – Bang and Olufsen want the stores to be captivating. The window displays and the store façade should catch your attention and draw you in. Then once you are inside, the store is aiming to tell stories to the customers. So little touches like a history wall with images of founders of the company, some historic products and so on, are included as talking points that should capture your interest in the store.

Immersive Experience – This is about trying to stimulate the senses of the customer when they are in the store. The stores will be using things like lighting to highlight particular products and will be encouraging the customer to touch the remote control of the product and to test the products themselves so they can feel the weight of the aluminium in their hand. Bang and Olufsen are trying to make shopping a very sensory experience and the new design is part of that.

Forget Time For a Moment – The target market of Bang and Olufsen is described as “extremely busy people with a lot going on professionally and personally,” so staff want to make it feel like when they step into the store, they are welcome to come down a gear, relax for a moment, watch the TVs and listen to the speakers. Little touches like having sofas and coat racks, sends the message that you are welcome to spend time in a store and be present in the moment. 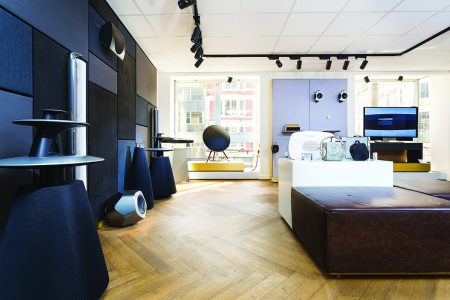 Engagement – This is about recognising each customer as an individual customer so for example, if you were a jazz lover, the music that would be chosen to demonstrate the speakers would be jazz music. Staff would therefore tailor the experience to you and your taste.

One of the first stores to be given the new concept is the Bang and Olufsen store in Truro. The store opened in autumn 2015 and is described as a “relatively small but important store with around 50sq m of customer facing space.”

Paul added: “One of the reasons we are really pleased with Truro, despite it being a relatively small retail space, is that we have managed to get all of the pieces in there so we think it is a really good illustration of the flexibility and the scaleability of the new store concept.”

The store concept was rolled out by M2 Retail, a Swedish company, who produce and supply fixtures and fittings. They are also responsible for taking the store concept internally and applying it to the physical space available.

Following the introduction of the new concept in Truro, the company are seeing an increase in turnover as well as customer satisfaction.

Paul concluded: “Hand on heart, we are seeing a significant uplift in turnover and I would say, alongside the hard numbers, the sense of uplift to morale, customer awareness and the overall vibe of the store, we are also seeing improvements in how people feel about the stores that they work in, which is satisfying, along with the increase in sales.

“I think the new concept will mean a great deal and will make us much more differentiated in terms of customer experience, relative to other TV and speaker retailers because it really is a different approach to anything else on the high street. It will increase our consistency because we have a lot of great partners out there, but we do still currently have some differences in store formats if you go from store to store around the globe. This will give us more consistency for the customer and build on a formula that is proven to work.”