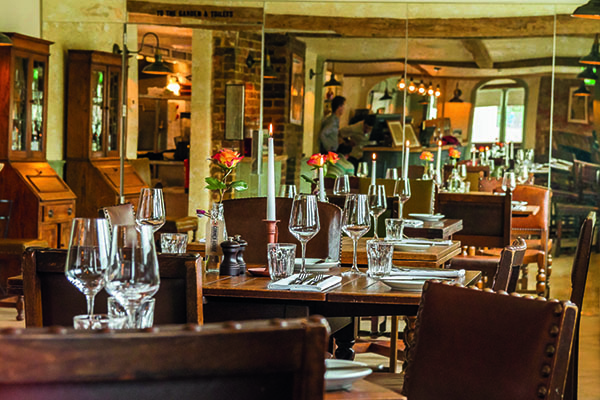 The Corner House – A Canterbury tale 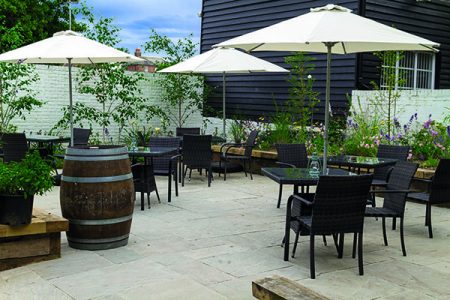 Created within a Grade II listed 16th century building which is the second oldest pub in Canterbury, the new Corner House bar and restaurant on Dover Street has just opened, having been beautifully refurbished and upgraded in keeping with its great historic character.

Overall designers and project managers for the scheme were del Renzio & del Renzio, with Gabriel Holland also working on the interior design. Main contractors for the project were DSG Construction.

Main structural works comprised the addition of a new floor to create a manager’s flat within disused stable space, and the reinforcement of the building’s main roof structure. These works presented a challenge, as everything had to be done according to the requirements of Listed Building Consent.

Ivan del Renzio, partner at del Renzio & del Renzio said: “The pub – which was previously The flying Horse – had not been refurbished for quite some time and the interior had become rather dilapidated, so extensive works were needed. These included the comprehensive stripping out of the ground floor and the installation of new floors and ceilings, as well as the creation of new wall finishes. In addition, all new building services were installed, including electrics and plumbing.

“During the works we uncovered some very nice original features including brick fireplaces and old oak beam ceilings, which were refurbished, restoring some of the original character of the building.” 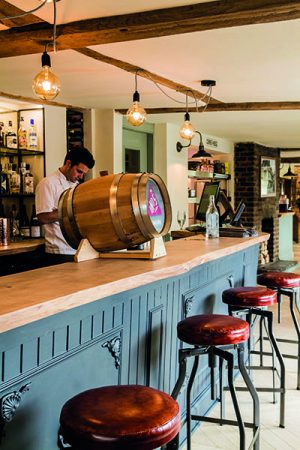 The ground floor of the new interior comprises a bar, private dining area and a restaurant with a new catering kitchen.

Within the bar area, the original carcass of the old bar was re-used, with a new Waney Oak bar top being added to complement the oak beamed ceiling. The back bar features metal and glass shelving and an antique style mirror.

The overall layout in this area generally comprises moveable tables, with Jacobean style chairs. Vintage style lighting has been installed and is powered by special LED bulbs.

A key element of the 40-cover restaurant area is an open kitchen where diners can see their food being prepared. This new state of the art stainless steel kitchen features top of the range equipment in a layout designed by the restaurant chef, with the existing quarry tiled floor having been cleaned and retained.

The kitchen is situated to the rear of a chimney breast with openings on either side, allowing diners to see the chefs at work. The original pub kitchen has been converted into a back of house food preparation and washing up area.

In addition to the main restaurant, a smaller private dining area has been created adjacent to the bar and features a darker colour scheme to the rest of the ground floor, where the main colour palette generally comprises light, muted shades including greys, blues and warm whites.

Three ensuite bedrooms have been created on the floors above, with the access to these provided by a separate entrance hall and stairwell. Two of the bedrooms are on the first floor, with the third bedroom being on the floor above and accessed by a 16th century spiral staircase.

“One of the challenges in creating the bedrooms was keeping as much of the historic character of the space as possible, which involved using lime plaster and repairing the original sash windows, to which we added minimal secondary glazing to cut sound from the road outside. One of the rooms has an original Georgian bay window, beneath which we have created a new window seat,” said Ivan del Renzio.

A new one-bedroom manager’s apartment, which also has its own staircase access in rustic oak, has been added within a former Georgian coach house adjoining the original pub building. The floor below is occupied by part of the main restaurant.

Externally, a new paved seating area has been created.

“We had very ambitious time frame for this fast track project, with Listed Building Consent, local authority permissions, technical design and the majority of the works being complete within just 6 months. The project team did a very good job,” said Ivan del Renzio.