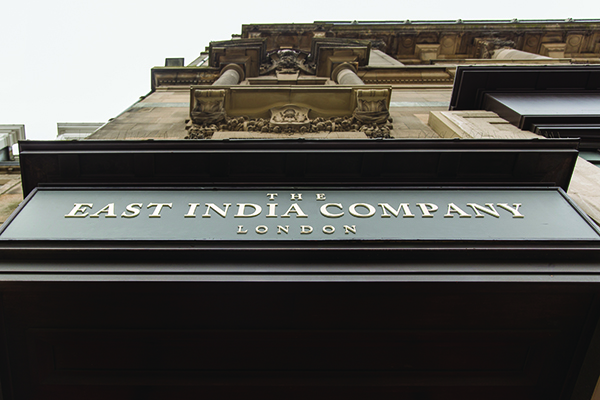 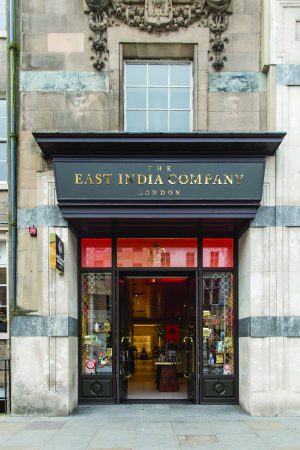 A contemporary revitalisation of one of history’s most powerful and successful trading ventures, The East India Company, has opened a flagship store on Edinburgh’s George Street, the Scottish capital’s most prestigious shopping address.

All design work for this important project was carried out by leading British studio Kinnersley Kent Design.

The new East India Company store, its first ever in Scotland, will offer the brand’s premium luxury fine foods range, as per its eleven existing stores in the UK and the Middle East.

The store will also feature the company’s new ‘Home’ range, which represents a first foray into the lifestyle market.

The new Scottish store features several unique new elements, including decorative and narrative elements which refer to the company’s historic activities in Scotland, as well as the first ever launch of an integrated F&B offer within an East India Company store.

The new store, typical of its historic location and building envelope, has a long, slim footprint, necessitating much thought on space planning.

The six-storey building was designed in the first decade of the 20th century in polished cream sandstone with granite bands, and was previously occupied by an opticians.

The new, 1,180 sq ft scheme (within an overall ground floor floorplate of 1,600 sq ft) features almost half as much retail floor space again as the previous occupant.

The storefront is made up of dark-stained timber and bronze-coloured, powder-coated metal, with a black overlay housing the polished brass storefront lettering. 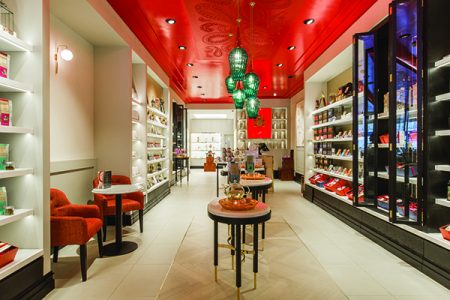 At the top of the storefront is a striking red panel, with The East India Company marque at its centre. In line with building regulations, much of the existing storefront structure was retained in terms of the bulkhead, whilst Georgian-proportioned panelling, a strong identifying element for the brand, was introduced along the base of the windows and doors.

Just inside the store, to each side of the window, sit two large-scale lightboxes, clearly visible from the exterior, displaying the gold outlines of historic company ships against a red textile background.

The company’s coat of arms, in gold, features at the rear of the store and is set into a striking red illuminated light-box.

The arrangement of the store allows for the new premium ‘home’ offer at the rear (featuring exquisite new ranges of bone china and silverware) to be displayed in a series of brass-framed glass cabinets, with the fine foods offer (teas, coffees, biscuits, jams and gift sets) at the front and centre.

The first display area features a table with shattered acrylic top and timber ball legs. The second incorporates a series of interlocking tables for tea-tasting, with mother-of-pearl inlaid marble tops.

A light feature directly overhead is made up of five raindrop-shaped pendants with a brass fitting in emerald green glass.

Along the perimeter walls, tall wooden display units in black have antiqued mirror panelling to create additional light and reflection for their product displays, whilst the illuminated surfaces of the rear cabinet shelving create a soft glow to house the new ‘Home’ offer of beautiful silverware tea sets.

The store’s dramatic ceiling is made up of a series of suspended panels in madder red, which feature a bespoke, paisley-etched pattern routed into the red lacquer.

The new, integrated F&B offer is made up of three tables for two, midway along the right and left perimeter walls and served from a dedicated tea counter – enabling the very finest teas and coffees to be enjoyed by customers visiting the store.