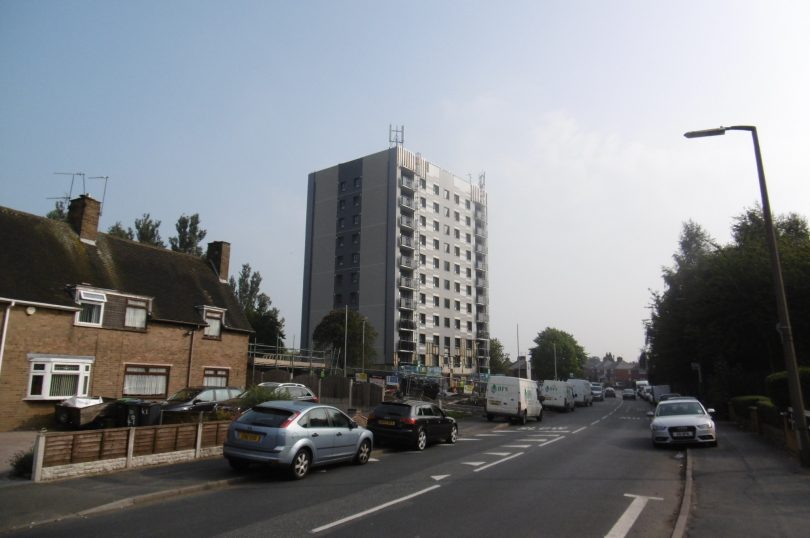 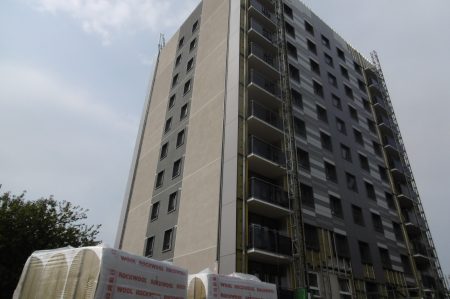 The project, which is expected to give the flats a further 30 year lifespan, is being carried out for Sandwell Metropolitan Borough Council by main contractors Keepmoat, with the council acting as project managers and architects. The senior architect and project manager responsible for the scheme is Tony Davies, with Steve Cockayne as design architect.

The 11-storey block containing 41 flats was constructed during 1966/67 and is one of only two blocks within the borough built using storey height pre-cast concrete panels bolted together at each floor level. Over the years, the building had become in need of updating as it suffered from water penetration through vertical and horizontal panel joints, a lack of wall insulation, draughty windows and flat roof problems.

Chris Bridgewood, Senior Clerk of Works for the council, who is supervising the project, said: “To be fair, this is a well-built block, but over time it had developed problems and needed enhancing.

“The main works are to the exterior of the building and include the re-cladding of the external facade, with the front and rear of the building being fitted with multi-coloured panels of rainscreen cladding, and the sides being rendered with 100 mm of render with a textured top coating. All four sides of the block are being insulated with 100mm of material to boost energy performance.

“Good insulation is important, since the tenant feedback on similar high rise refurbishments in the past has been particularly positive with regard to reduced energy bills.”

New windows and balcony doors with double glazed aluminium and timber composite frames, have been installed, together with new balcony rails and panels. The windows have a clip on trim externally, which blends with the new rainscreen cladding.

Further external works include the fitting of a new state-of-the-art steel fabricated pitched roof over the existing flat roof, together with new rainwater pipes.

A number of garages which are no longer in use are being demolished, with a remaining section of garages being refurbished and re-roofed.

In addition, a new car park for the building is being constructed and new landscaping, including new paving, turfing and planting is being carried out.

Internally, the entrance lobby is being remodelled to enhance the appearance of the block and to provide greater security for tenants through an electronic door access system.

Three new two bedroom flats are also being created on the ground floor, within space previously occupied by storage facilities, which were demolished.

Two new lifts are being installed and new internal fire rated front doors are being fitted to all the flats. In addition, all communal areas are being re-decorated with special fire resistant paint.

The 12 month project is due to be completed in February 2017.

Kynaston House is the 34th tower block in Sandwell to benefit from the council’s high rise improvement programme since 2005.