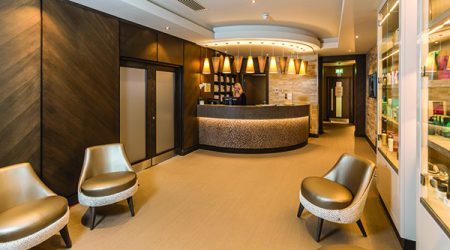 The St Pierre Park hotel in Guernsey has built a reputation for being able to offer some of the best health and fitness services on the island. In addition to three floodlit outdoor tennis courts, a nine hole golf course and an eight bay driving range, is a newly revamped spa facility.

Interior design agency, 10 Design were brought on board to revamp the existing space having previously worked with the hotel’s owners Hand Picked Hotels. Liz McNeill, director at 10 Design, talked to Premier Hospitality about the origins of the project and the end result:

“St Pierre Park hotel were looking to enhance the area that they had for leisure and spa. The layout was very convoluted and they really wanted to vastly improve the customer experience. It was quite dated. “

“They wanted to increase their gym offering in terms of size. The gym was quite small originally. The existing business centre that was redundant went on to form part of the fitness zone. We took back a lot of underused spaces which helped to create a larger gym space.”

“The treatment rooms were very small but the changing areas were colossal, there was no sense to the layout. We were on quite a tight budget with the project so we had to try and retain as many block walls as we could in order to minimise the demolition side of it. We internally rearranged the entire layout to make it work better and create a flow.  ”

The freedom given over to Liz and her team meant the real challenge of the project was putting plans into place. For example, the health and spa centre is based in the lower ground basement area meaning services like drainage and waste had to be rearranged.

On the layout and design, Liz added:

“We wanted to create a natural feel. With the hotel being situated inland we took inspiration from the surroundings externally. There’s a lake just outside the spa that you can walk around with a beautiful tree line and we wanted to bring all of that into the space.  The entrance really sets the scene, we have incorporated very textured, very tactile stone walls, bringing the outside in. The reception has a very neutral colour scheme, it’s all quite earthy. We’ve used lots of natural materials, naturals stones like limestone. We have clad the reception desk in a stone mosaic. Once again bringing the outside in we commissioned artwork and panels with tree reliefs.”

“Tucked around out of the way is a lounge spa waiting area. There are five treatment rooms, a Mani Pedi area and a changing area within the spa. The spa is the most exclusive of all of the facilities. There is also a new decked area that runs the full length of the hotel at the back. It has sun loungers to relax but there is also space to eat.”

Situated on 35 acres of land, with 131 rooms, conference facilities and extensive wedding packages, the St Pierre caters to a broad spectrum of guests. The Victor Hugo restaurant, under head chef Richard Bloomfield, offers creative dishes made with fresh local ingredients to match the season.

Hand Picked Hotels operate a collection of hotels across the UK. While buildings like the St Pierre Park are more modern, many of the hotels are historic former residences. Glasgow-based 10 Design previously worked on the spa in the L’Horizon hotel in Jersey. Moving forward, Liz is delighted at how the project turned out and is hopeful it leads to similar work in the future.

“It’s fantastic because it’s a bit of a showcase for us. It’s not every day you get a project of that size and it really gave us an opportunity to start from scratch. Quite a lot of the time on projects you’re working within an existing building and a lot of what you have to take into account is being retained.  You are then supplementing and adding to that. With this, because it was a full strip out, it was a bit of a blank canvas so it let us do something different.” 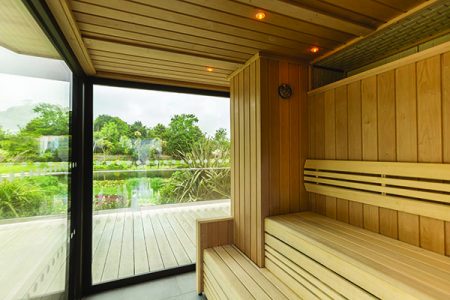 P&C Projects specialise in refurbishment and fit out in the hospitality sector. Operating since 2009, they have a wealth of experience working on numerous bedroom and public area refurbishments in four star and above hotels.

They have worked on two sites for AB Hotels, Sopwell House and Crowne Plaza Resorts, Colchester, which entailed the refurbishment of 34 bed rooms and 14 spa rooms as well as three connected function rooms respectively. They have also been a part of numerous projects for Brasserie Blanc and White Bar Co. including Farnham, Leeds, The Kings Head and The Hare pubs. Most recently they completed full refurbishments The Oakwood in Alderley Edge and Brasserie Blanc Knutsford.

As the main contractor for St Pierre Park, P&C carried out the refurbishment of the entire Spa and Leisure facilities, including the swimming pool, a new decked area, changing rooms, treatment rooms, the reception and chill out areas. The swimming pool involved a full strip out of all existing tiling and ceiling finishes as well as the installation of a new sauna and steam room. For the leisure area it entailed a full strip out of the changing areas along with a complete remodel to form new cubicles and shower area. The spa facility was also a full strip out with the formation of new treatment rooms, reception counter and display units.

“This project was important to P&C as it was a fantastic opportunity for our team to showcase our professionalism and attention to detail on a large scale, high end Spa and Leisure refurbishment project.”

“We’re a family owned business that prides itself in always completing a project that delivers on our client’s expectations.”