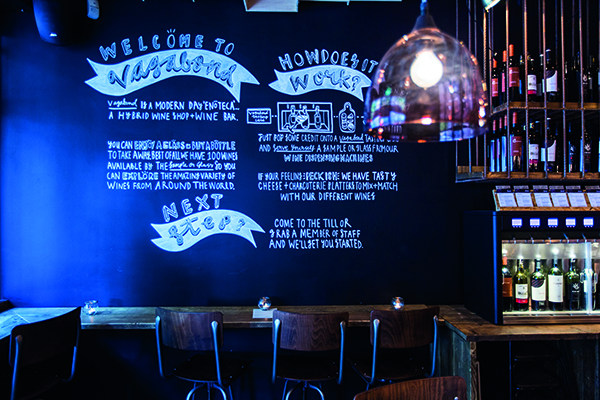 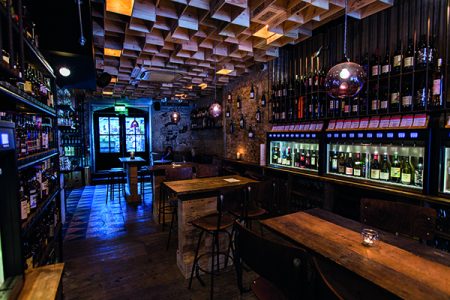 Winner of the Best UK Bar category of the prestigious Restaurant and Bar Design Awards 2016, the Vagabond Wines’ venue at Spitalfields Market, London, is certainly exceptional.

The outstanding interior design for this independent and award-winning wine bar and shop offering wines by the sample, glass or bottle, was designed by Finch Interiors.

Located in the beautiful and historic Old Spitalfields Market, the venue is the third that Vagabond opened – and a great source of pride for the company.

With 100 wines on tap (including Old and New World, desert and fortified wines), the interior includes comfortable seating under the Spitalfields’ covered market roof, as well as a cosy lounge-style basement  There are also small plate food options devised to reflect the seasons and complement the wines. In addition, the venue offers a selection of craft beers, as well as whisky and gin.

Created on the theme of a traditional European winery, the interior is contemporary, yet also welcoming and comfortable and includes an outside seating area in the market itself, as well as a basement. Original wine narrative mural graphics enhance the walls, which have been stripped back to reveal the original brickwork.  The venue also features Vagabond’s cleverly designed wine dispensing machines, which are made by a Dutch company. The machines pump argon gas into the bottles as they empty to keep oxygen out of the wine. Customers pre-load a card into the machine before selecting their wine which is then dispensed.   Customers can also order a glass of wine from the counter – or buy a bottle and enjoy it on site with a small corkage fee.

Sophie Finch of Finch Interiors said: “Vagabond Wines adopts the principle of an Italian ‘enoteca’- derived from a Greek word which literally means ‘wine repository’. A genuine ‘enoteca’ is primarily directed at giving visitors the opportunity to taste wines at a reasonable fee and to buy them. 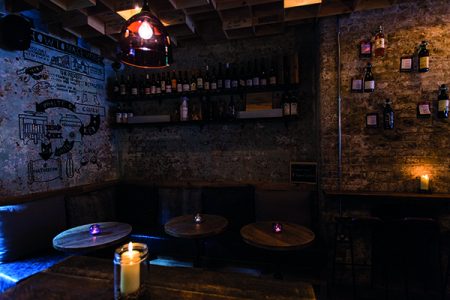 “Vagabond is a venue where you taste specially selected wines by the glass to help you find your perfect tipple, in a relaxed unpretentious atmosphere’.

“The venue’s wine dispensing machines are great and custom made for Vagabond.

“This place has got ‘messy’ written all over it. Several tastes later you might make it out…..Very dangerous and good fun!”

Vagabond Wines has also opened a new store in Clapham in July, followed by others in Victoria in October and Battersea in April 2017, taking the estate up to six.

Vagabond started in late 2010, frustrated with the London wine scene that was dominated by supermarkets and wine chains, all carrying the same mass-produced wines.

According to Vagabond: “There were some quality independents, but many of them were stuffy and old-school, the kind that made you feel unworthy just upon walking in.

We wanted to create a wine shop and bar for the rest of us — those who like wine but don’t know a whole lot about it!”

Vagabond always have 100 wines available to try, either by the sample or the glass.

They carry wines from all over the world, but have a particular fondness for wines from lesser known grapes and regions.

The company believe that these are terrific wines that offer incredible value, mainly because no one has ever heard of them and customer’s don’t have to pay for the a ‘brand’ (or a massive marketing team).

Most of the wines Vagabond carry are from small producers, and many are organic.