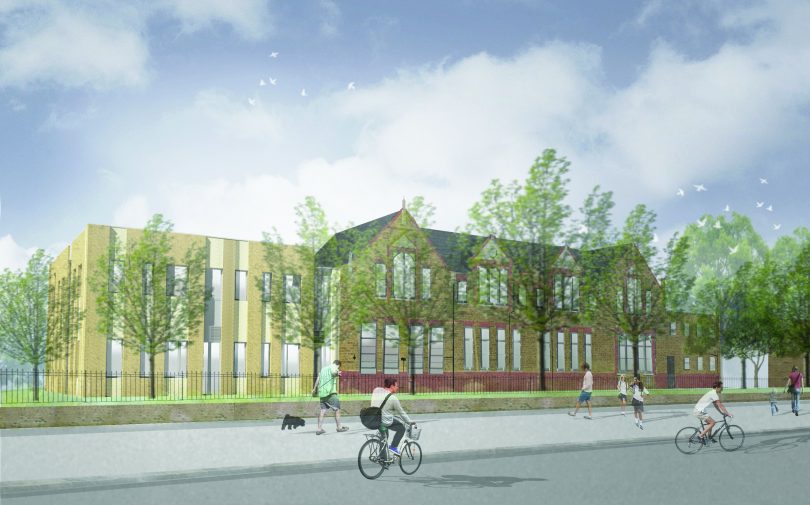 A project involving the expansion of accommodation at Bounds Green Primary School is just being completed in a scheme geared to providing much needed additional primary school places in the London Borough of Haringey.

The project follows the findings of a report which revealed that additional school places were needed in the area around Bounds Green School.

The scheme, which has provided accommodation including additional classrooms and study spaces, a re-landscaped playground with improved access from the school and new ground floor toilets, allows for the reinstatement of three forms of entry to the previously two form entry school.

The project was carried out for Haringey Council. Architects and designers for the scheme up to the planning stage were Shepherd Epstein Hunter, who changed roles to technical advisors and employers agents once the works were underway. Design and build contractors for the project are Lakehouse Contracts.

The existing school building was built in the 1900s and has been altered and extended over time. The school is arranged within a square site in an ‘L’-shape around the playground in the southwest corner.

The works included the construction of two new extensions, the largest of which required the demolition of a wing adjacent to the school’s Block 4 Key Stage 2 building facing bounds Green Road. The demolished wing was a former premises manager’s house, which was unsuitable for re-use and of little architectural merit.

This was replaced by a new two storey extension incorporating new classrooms on the ground floor and group rooms, staff rooms and a special needs teaching room on the first floor.

In contrast to the existing school, the extension has been designed with a flat roof and modern fenestration. It does however reflect some of the architectural language and rhythm of the existing building, including the strong vertical emphasis provided by tall windows and the use of two tonnes of brick, together with traditional downpipes and hoppers.

Yuto Fujii of Shepherd Epstein Hunter said: “We wanted the extension to be conceived as a contrast to the existing Victorian building, but with some related detailing – so we designed a contemporary building, incorporating windows echoing the vertical rhythms of the fenestration of the original building.”

A further new small flat roofed brick single storey extension to the school’s kitchen block was constructed to the rear side (northwest) of the site.

Yuto Fujii said: “This is a small extension purely to expand the school’s catering capacity which will be needed due to the increase in pupil numbers. The extension is designed to closely match the existing Key Stage 2 block which it adjoins and which was built in the last 10 years.”

Further works include the refurbishment of existing teaching and staff spaces in the Key Stage 2 building.

Yuto Fujii said: “Works in these areas included the stripping out and replacement of redundant services, the re-decoration of some of the classrooms and the installation of a new fire safety system in line with current regulations.”

External works included the development of the external space to support and enhance teaching, learning and play. Some of the ideas from a pupils’ design competition were incorporated within the landscape design.

“Working on a live school site has been a challenge for the construction team and the works have required careful phasing and management, as well as close liaison with the school and the council.”

The school’s reinstatement to three-form entry will result in an increase from 509 students to 656 students over seven years including 26 full-time nursery places. The total increase will result in 147 additional pupils and 20 full time staff.