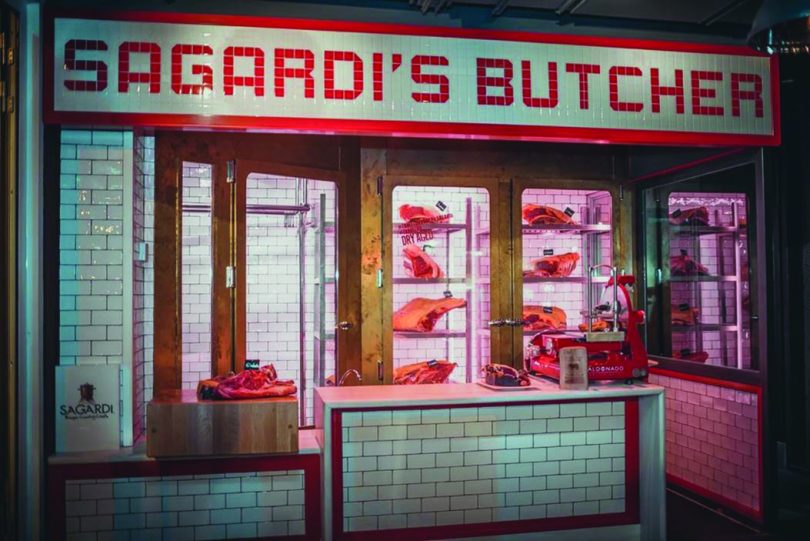 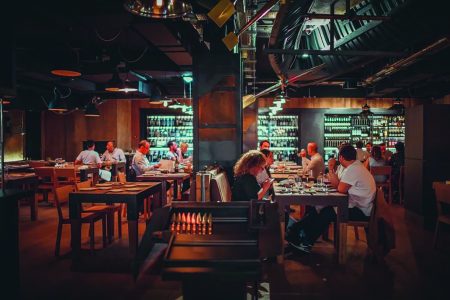 Founded by Vitoria-born and bred Head Chef Iñaki Viñaspre in 1996, Sagardi’s philosophy focuses on quality, tradition and simplicity, with recipes and techniques passed down through the generations. Iñaki is fond of referring to his cuisine as ‘the cooking of their grandmothers’.

The Basque Country style of cooking champions the use of exceptional-quality seasonal ingredients with a special emphasis on fine cuts of beef known as “Txuletón” and whole fish cooked on the grill. Everything is flown in daily from San Sebastián’s most trusted farm and coastal suppliers, evoking the restaurant’s roots in traditional Basque farms, taverns and cider houses.

Iñaki is also regarded as Spain’s spokesperson for the cuisine of the Basque region and works with the Basque Tourism Agency to promote this culinary culture.

Sagardi’s interior reflects the restaurant’s central themes of land and sea, with materials such as iron, wood and stone combining to make earthy toned tables, chairs and banquettes. A trademark throughout all Sagardi restaurants, the ‘trainera’, a centuries-old traditional Basque fishing boat, hangs upside down on the ceiling above the central space. The soft lighting combines with these elements to make the restaurant a relaxed place where it would be easy to while away the hours eating and drinking to your heart’s content, in true Basque Country style.

No good Basque Country restaurant would be complete without Donosti-style Pintxos – a piece of bread with a mixed topping held together with a cocktail stick – the ultimate miniature staple of the region’s cuisine. This best-loved delicacy is perfectly accompanied with a chilled glass of Basque Country cider or Basque Txakoli wine, traditionally poured from a height.

Iñaki is in fact credited with bringing this Basque tradition to the rest of Spain when he first introduced Pintxos in his Barcelona restaurant back in 1996. Sagardi’s seasonally evolving selection includes around 80 varieties, to be eaten at the bar at any time of day. They are also available to takeout.

Varying seasonal dishes include “Guindilla” peppers from Ibarra, Red almadraba tuna tartare from Barbate and Farmhouse tomatoes – basic but packed full of flavour, so often not the case.

The restaurant at Sagardi is dominated by a striking central Grill, especially designed by Iñaki, where he and his brother Mikel can be seen salting and flaming prime cuts of “Txuletón” from herds that are a minimum of six years old. The beef then undergoes a dedicated maturation process for a period between three and ten weeks to develop the very best textures and flavours. There are two varieties to choose from: “Vaca” (ex dairy cows) and “Buey” (Galician ox). 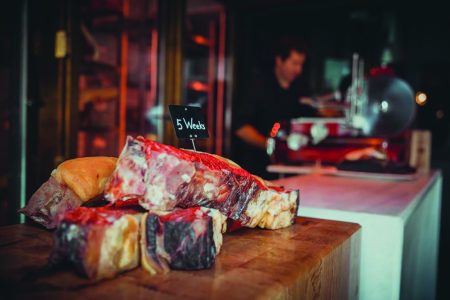 The Veal sweetbreads with grilled tomatoes are also a must, as are the Farm’s pork rib and Iparralde duck magret with cider apple. Other meat dishes include Stewed Lamb trotters, Biscay style, Tripe “Rioja style” and Oxtail in “Rioja Alavesa” red wine.

The fish offering at Sagardi is no less impressive with dishes from the grill featuring Almadraba red tuna from Barbate with ratatouille, Salted cod and San Sebastián style wild fresh fish from the market.

Baby squid in ink sauce and Cider house style salted cod make up the non-grill dishes; whereas sides include Lettuce with onion from the vegetable gardens of Hernani and Green Ibarra chilli peppers.

Desserts are comforting and again, simple, with the quality of the ingredients taking precedence. There’s Peach in txakoli syrup with lemon verbena ice cream, Chocolate mousse and walnuts, Apple Pie in Sagardoz liqueur and Blueberry cheesecake, or if you feel like something savoury, a selection of handmade Basque cheeses.

Sagardi gets its name from the term for the smell of apples when made into cider and Basque cider is known as ‘Sagardoa’, so naturally, this beloved essential is an important component on the drinks list. There are also regional beers and a vast, lovingly complied selection of local and world wines as well as cavas, champagne and a concise list of dessert wines and Spanish sherries, as well as a special selection from the secret cellar.

There is also a private dining area that can seat up to 28 people in one space or 14 and 18 people in two separate rooms. The space can also be exclusively hired for private functions for up to 60 people without seating. Another exciting aspect of this multi-layered offering is the stunning standalone Sagardi butcher at the entrance to the restaurant, preparing the “Txuleton” cut from formidable sides of this fine beef.