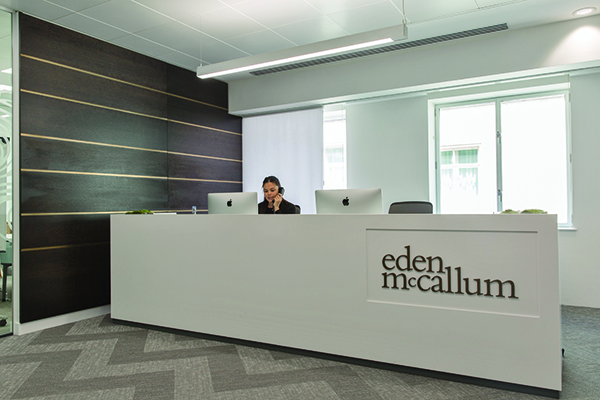 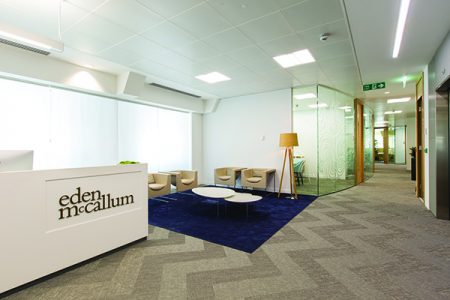 Workplace specialists align have completed their transformation of Eden McCallum’s new offices which are set in the heart of London’s west end.

Eden McCallum is a highly successful managing consulting firm with an innovative consulting model that allows them to deliver great projects by using the very best independent consultants. Established in 2000 by Founding Partners Liann Eden and Dena McCallum, the company has offices in London, Amsterdam and Zürich with clients including a third of the FTSE 100.

The interior architecture and design agency align, based in London, was chosen to design the new office space in order to create an understated environment that suited Eden McCallum’s corporate development vision. Co-founded by Gurvinder Khurana and Nigel Tresise, align is active across a range of sectors including retail, hospitality, commercial and residential as well as workplace design. Their aim is to create spaces that are designed around real people’s wants, needs and ergonomic well-being.

The new office is an 8,715ft2 single-storey space on the fifth floor of a newly redeveloped Crown Estates building and is just minutes from Piccadilly Circus. The brief for the design was to create a space that was quiet and sophisticated in order to become Eden McCallum’s new London HQ. “The challenge was to create a suite of offices that were full of subtle statements and which met the requirement for a ‘fresh, interesting, human-scale and unregimented’ space,” commented align Director and Co-founder Gurvinder Khurana.

This new space features a range of different sized meeting rooms including an open-plan office area with integrated meeting zones, break-out spaces and private phone booth areas. To differentiate these areas, the flooring uses a mix of finishes and styles such as woven grey vinyl by Bolon for the meeting area circulation corridor and a darker-patterned carpet by Shaw Contract for the meeting rooms. 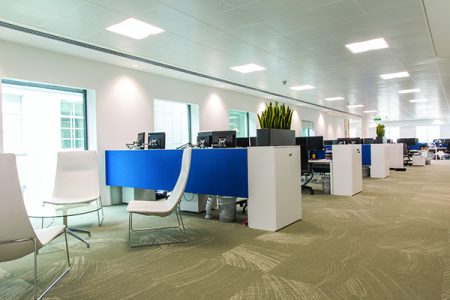 The office floor has windows along the full length of both sides which highlights the neutral, off-white base palette. “Interest is added by subtle interjections of texture and colour in a range of pale, oceanic blues and greens as well as a wall of individual feature wallpaper in most of the meeting rooms,” Gurvinder explained. Working with the main contractor Virtus Contracts, align created an office space that is fresh and welcoming for both employees and clients alike.

The reception area features a white, bespoke Corian desk with Eden McCallum branding at the front in antiqued bronze lettering. Behind the reception desk is a wall of white, semi-transparent panel blinds and a smoked oak feature wall to the left with thin, inset bronze strips. Within this reception area is visitor seating made up of four leather Nuba seats from Stua as well as a dark blue rug used to separate this area from the main reception desk.

To each side of the reception are 6-person meeting rooms with more rooms beyond including an 8-person board room and smaller, more individual rooms that curve along the corridor. The outer glass wall of the corridor has a nature-inspired motif which was designed in-house at align.

The meeting rooms themselves each have a wall of individual feature wallpaper, soft shell chairs by Vitra and contemporary wooden credenzas as well as white laminate meeting tables in the smaller rooms and walnut in the two larger rooms. All the meeting rooms have write-on wall coverings by Tektura, allowing more freedom when it comes to those in meetings.

The board room is painted in two complimentary colours, Farrow & Ball green, with furniture used from the company’s previous office. The smaller meeting rooms are individually designed in order to accommodate a more personalised visit.

The private phone booths offer a quiet and confidential area available for clients and consultants. Booths are white oak with tall, thin ‘vision panels’ on each door and have HAL white chairs and scribed-in white benches that have a birch ply edge.

At the end of the row of meeting rooms in the office space is the ‘Hub’ kitchen and dining area that has an oak vinyl floor as well as Louis Poulsen feature lights.

There is also a much more traditional open office space that uses desks from the Scope range by Knoll. This is linked to the meeting rooms through the incorporated open meeting areas and also features a ‘snug’ seat which is the Verco Jensen informal meeting booth.

“We couldn’t be happier with the design of our new office,” commented Kathryn Whinney, Operations Director for Eden McCallum. “Overall the experience was made far easier by align and the rest of the firm is very happy to be working in such an attractive and enjoyable space.” 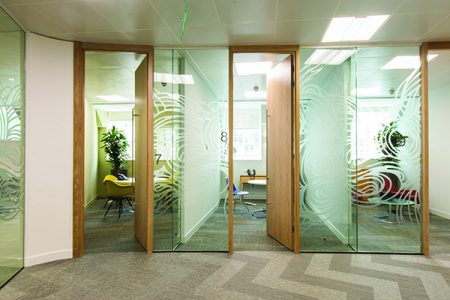 Virtus Contracts Limited are fit out and refurbishment contractor operating principally in London and the south east of England in commercial office, education, residential and retail sectors. Established in 2000 by the current directors the company has a staff of 36 personnel working on a variety of fit out projects for companies such as Barings, Foxtons, Brandopus and Eden McCallum to name a few, but Virtus Contracts also undertake specialist projects such as the Indoor Jacobean Theatre at The Globe Theatre, the clock tower to Brighton Boys College along with detailed refurbishment projects. The project values Virtus Contracts undertake range from £1,000 to £10m and typically fast track projects procured traditionally or on a design and build basis.

“At Virtus, we very much believe in the partnering ethos, whereby our expertise in co-ordination and management and our solution focused approach to refurbishment and fitting out process has proven successful on every project we have undertaken. The process we adopt enables us to establish goals and objectives for the overall project very early, by working closely with all parties concerned and this was typified on the Eden McCallum project where we had worked with their team previously, so they had experience of what we could achieve in light of an immovable deadline to exit their existing premises prior to its demolition.”

“We consider an important criterion for the success of any project is that it is adequately resourced with the correct calibre team and to ensure that all the team members obtain their objectives. At Virtus Contracts we believe in a non-adversarial approach supported by confidence in our ability and commitment and dedication of all our staff to achieve a common goal.”