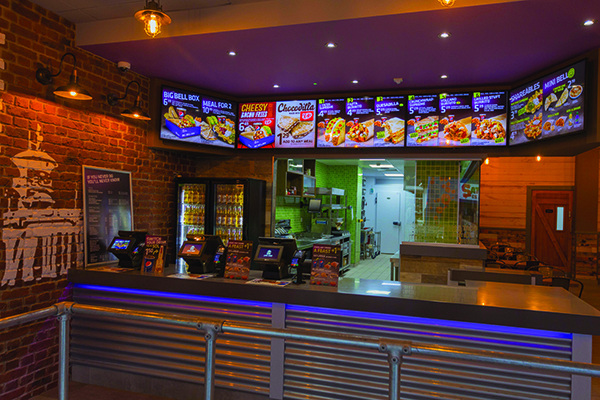 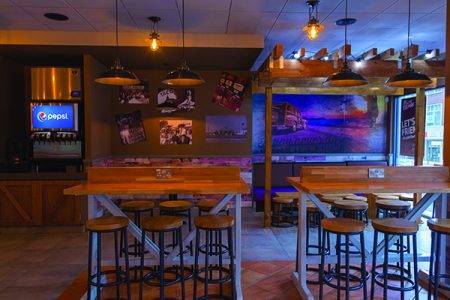 A staple of the American quick service industry has continued its expansion into the UK market with the opening of its thirteenth UK restaurant and first in the south of England. Taco Bell, pioneers of quick-Mexican cuisine for over fifty years, opened in Southampton at the end of November.

In addition to Taco Bell’s already popular menu of tacos, burritos, quesadillas and nachos, the Southampton branch launched two new creations. The limited edition cheesy bacon fries burrito box has already proved hugely popular with locals, as has the limited edition chocodilla made with KitKat – a grilled soft tortilla with warm and melted KitKat inside. Recent editions include the Quesarito and the Dare Devil Grillers.

The store is ideally placed to take advantage of footfall from neighbouring retail shops, with customers able to pop in for a quick Mexican meal in between shopping. The site is also well served by public transport links and is just a short walk from the popular Houndwell Park.

Bringing an already refined and well-tuned concept to the south coast, the one-floor Taco Bell Southampton has an open kitchen creating a sense of theatre and giving customers a glimpse of what they’re in store for while waiting to order. The interior fit out was carried out by Jephsons Shopfitters and included pendant light and artwork inspired by the brand’s Mexican roots. Free Wi-Fi and charging stations are also available in-store for portable devices.

In total, 30 new local jobs have been created by the opening. As opposed to many of its competitors, customers can enjoy their meal with Sol Cervezas beer. Alongside the new creations, classics dishes such as crunchy or soft tacos, the volcano burrito and the 7 layer burrito are available.

The much anticipated opening in Southampton brought an explosion of flavours, colours and excitement to the city and saw customers queuing down the street in anticipation. The first 100 people inside received a free t-shirt to mark the occasion.

Prior to the official launch an even bigger prize was put on offer with three ‘Golden Tacos’ hidden around the city centre waiting to be snapped up by lucky winners. The tacos entitled the winner an invitation to the launch party for themselves and a friend plus a year’s supply of Taco Bell. The Southampton site follows openings in Rotherham and Colchester.

Taco Bell is the world’s leading Mexican-inspired quick service restaurant. Founded in 1962 by former US Marine Glen Bell in Downey, California, Taco Bell serves over 42 million customers weekly across the globe. Alongside its more than 350 franchise organisations, Taco Bell have over 6,500 restaurants across the United States and continues to growth internationally with over 280 restaurants in Latin America, Europe and Asia. 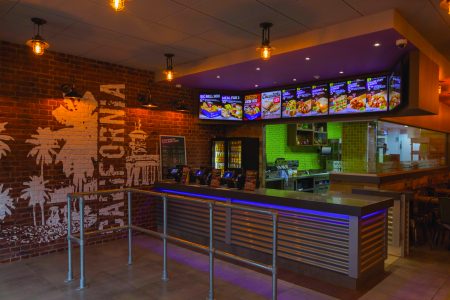 Jephsons Shopfitters has been providing first-class interior fit-out services to the food retail and hospitality sector in the UK for over 40 years. The team on their 10,000 square feet of manufacturing workshops work with hardwoods, laminates and Corian as well as MDF and with a spray booth that can create any wood finish desired, there is no bespoke project Jephsons Shopfitters cannot handle.

Jephsons Shopfitters are proud to be associated with some of the biggest names on the High Street including Taco Bell, Costa Coffee, Pizza Hut and KFC. Jephsons is consistently chosen on recommendation and because of its experience in manufacturing specific joinery designs for clients. The projects Jephsons work on usually call for a bespoke approach to the fit-out of multiple and various areas that include food preparation, serving and eating.

Jephsons first started working with Taco Bell when the international brand opened its first new UK restaurant in 2010. Since then Jephsons have gone on to manufacture for and fit-out more than half of the new restaurants in the UK.

When it comes to providing services, Jephsons like to work with clients that understand and appreciate their ethos of focussing on high quality joinery that is supplied to budget and fitted on time. Taco Bell is a growing brand with aspirations and Jephsons want to play their part in helping it achieve the success it deserves. Jephsons looks forward to working on more Taco Bell projects like the highly successful one in Southampton.