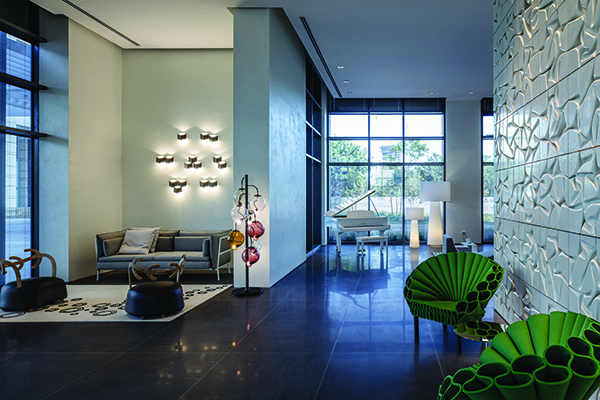 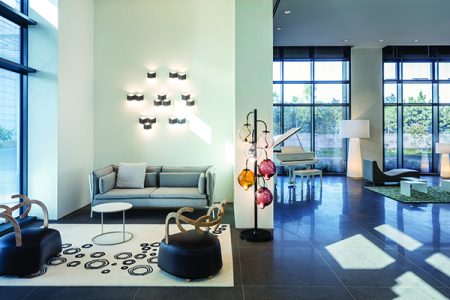 The W Prime building in Tel Aviv has taken a unique approach to its lobby, boasting a space that is both functional and visually stunning.

Comprising a reception and public areas as well as a private gym and spa of 3440 square meters.   The lobby is a fresh, exciting and unique environment unlike anything seen in similar buildings nearby. Local interior designer Michal Han was the creative force behind the lobby design and the accompanying gym and spa. She spoke to Premier Hospitality about the thinking behind the lobby and the feedback so far:

“The first thing I did was have a look at other buildings and see how they had been designed.  I did lot of research about the feelings people have entering a building and realised a good lobby is one you want to stay in.

“I wanted to create a soft feeling but a powerful one. I looked at the big, square concrete walls in the middle of the lobby and wanted to make them appear softer. I came to the conclusion that I needed to look for a material that would standout on the wall.

“We settled on a white concrete tile that looks like silk fabric. It is the main material and from it we developed a whole new language of design. The materials and shapes are all connected to each other. It was important to me that every part of the building connected to other areas.”

The main focal point of the building is created by the large cladded walls facing the entrance of the building’s open lobby. The white concrete material, Michal referenced, gives these walls a sense of movement and presents a reflection of light.

Located in front of this wall is the reception desk that has been designed to create an element of curiosity and encourages visitors to take a closer look.

To succeed in creating an environment in which people want to stay, the lobby is equipped with a number of comfortable and aesthetically pleasing seating areas. Collaboration between Michal and top art director Giulio Cappellini, the areas provide a sense of relaxation.

A particular highlight is the six metre expansive chocolate coloured library filled with interesting art and books which can be accessed by the building’s inhabitants which was design and manufacture by in collaborate between Michal and Hadar Han. Music in the lobby can be provided by the large, white grand piano located opposite the library, available to be used by visitors.

Continuity between the lobby and the private spa is achieved through the choice of wall tiles between the two spaces that mimic the feeling of the lobby. The spa itself is cladded with large dark tiles to add a sense of length and expansion to the space whilst contrasting with the white wood sauna. The gym has been styled with equipment facing the outdoor swimming pool, with a glass façade flooding the space with natural light.

Despite the unconventional design, the lobby has proved to be a huge success. Feedback has been unbelievable, it’s the talk of the town.

With Michal Han commenting: “A lot of people are sitting in the lobby and have been commenting about it on social media. It is unique and not something you see in many other building. The tenants in the building are also very happy because they can invite their friends and show them the space”.

Whatever the time of the day, when you enter the lobby it’s not abandoned. People like the atmosphere and are coming from all over the neighbourhood to sit and meet friends.

The W Prime building was the third of the W series of towers to be built in Tzamerat Park, Tel Aviv.