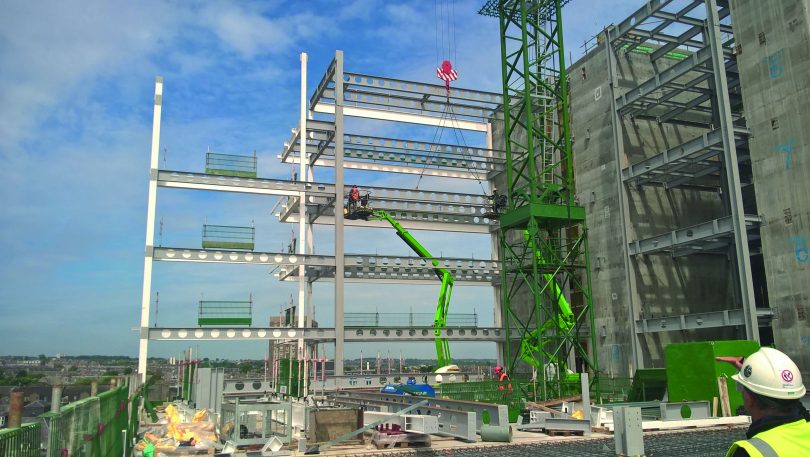 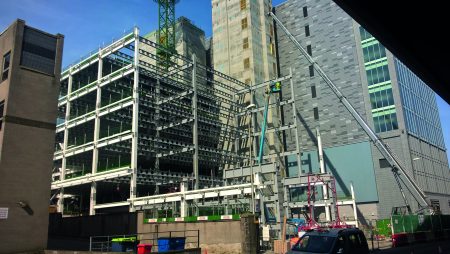 A brand new building designed to provide Aberdeen city centre with a state-of-the-art office space is beginning to take shape ahead of its completion later in the year. The Silver Fin Building will boast 132,151 sq ft of grade ‘A’ office accommodation across nine floors in a standout structure.

Located at the gateway between the city centre and Albyn Place, Aberdeen’s prime office address, The Silver Fin Building is set to be a market leader for businesses looking to be based in an innovative space.

The building will also feature a tower element with unrivalled views across Aberdeen. The name of the building is derived from the external architectural treatment, which features a granite frame and horizontal elements that contrast with vertical aluminium ‘Silver Fins’ that will catch the light and be instantly recognisable to passers-by.

At the heart of the structure is a steel shell, comprising of 1,600 tonnes of steel across 5,670 individual pieces. Aberdeenshire-based RIM Fabrications Ltd worked on erecting the steel shell. Commercial Manager David Mutch spoke to Premier Construction about the work:

“We first worked on the project carrying out temporary propping works in conjunction with the demolition works back in August 2015. The construction of the steel shell that we erected began in February 2016 and we completed it seven months later.

“There were a few challenges we had to overcome. It was a very tight site, there was no laydown area. The building virtually covered the whole footprint of the site so logistics, like getting steel delivered, were tricky. When the steel was delivered it was taken straight off the back of a lorry by a tower crane and installed in position.

“It wasn’t much of a problem at the beginning but once the whole of the structure at the base had been finished the site was very closed in. Deliveries had to come in one way and go out the other because there wasn’t room for vehicles to turn around. This wasn’t a surprise though and it just meant work took a little longer and required a high level of coordination.”

“We also fire protected the external sides of the beams in our Kintore facility so when we completed the frame there was no scaffolding required to do the fire protection works. Obviously with it being such a tall structure some of the beams were quite hefty sizes.”

The tight site also means a significant amount of planning and coordination has been required between main contractor Sir Robert McAlpine and sub-contractors. The fact the building remains on schedule is a testament to this.

The design of The Silver Fin makes an instant impression. Behind a striking, contemporary Scottish granite façade is an expansive entrance lobby with a four storey atrium providing views up to the office tower above.

The entrance lobby will also incorporate a business lounge where occupiers and guests will be able to use Wi-Fi, informal meeting areas and refreshment facilities. Further up the building, offset cores allow for maximum open plan space as well as offering an uninterrupted sightline, natural light and beautiful views across the city. In addition to being a market leader in office space, the building will also meet the highest sustainability standards.

Regarded by some as the ‘energy capital of Europe’, Aberdeen is an evolving city boasting excellent prospects for new and established businesses. Once completed, The Silver Fin Building will be a welcome addition to the city’s continually expanding portfolio, setting a new standard for office space and design.

T.I. Tiles International Ltd specialise in the design and supply of façade systems for use in the construction industry. The company has been in operation for 33 years and within this time has been involved in a range of prestigious projects, including works for London Underground, Halifax BS, Prime Four Developments and Berkeley Homes, amongst others.

Most recently, T.I. Tiles International Ltd has been involved in the Silver Fin building, where they were responsible for the supply of stone and other façade systems.

“It was important for us to be involved with this project as we were able to work on an intricate design with large scale pieces, which really demonstrated our capabilities.”

“At T.I. Tiles International Ltd we pride ourselves on the quality of our work, as well as our service which is second to none.”