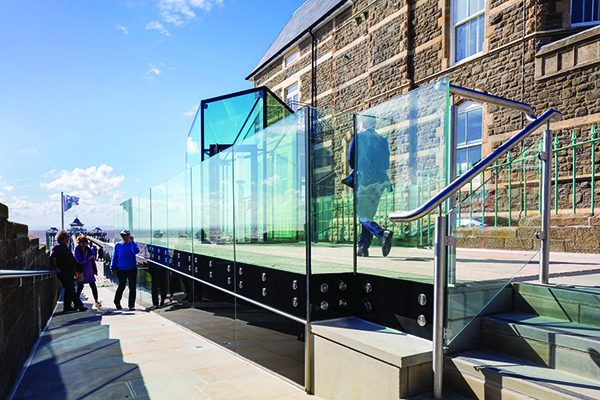 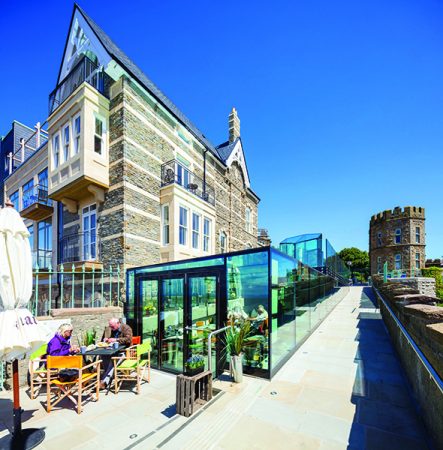 The exceptional design of historic Clevedon Pier’s stunning new visitor centre has won it a place on the shortlist in the Tourism and Leisure category of the Royal Institute of Chartered Surveyors (RICS) South West Region Awards 2017.

Originally constructed to receive paddle steamer passengers from Devon and Wales, the pier, which first opened its doors in 1869, is the only operating Grade I listed seaside pier in the UK. To thrive it needed to be able to offer an enhanced visitor experience which will contribute to the long term future of the pier.

The only site available for the £2.2 million new visitor centre was the approach ramp to the pier, which drops 3 metres between road and pier deck, and is a mere 5.8 metres wide.

The project was carried out for the Clevedon Pier and Heritage preservation Trust, by main contractors Beard, and was designed by O’Leary Gross Architects.

The scheme also included the refurbishment of the original Victorian Toll House at the pier entrance, including the installation of new exhibition spaces.

The new visitor centre is a partly buried structure – with its lowest level dug down into the earth and rock of the pier approach ramp.

Construction of the visitor centre provided a real challenge to designers and builders alike, and required complex temporary works to protect and support the Grade I listed structure over two winters on an exposed coastal site.

Simon Talbot-Ponsonby, chairman of the Clevedon Pier and Heritage Trust said: “We were very pleased and proud for the visitor centre to be included in the shortlist for the RICS Awards, and are delighted with the finished project. The main contractors produced a very high quality of work with great attention to detail. Last year we had 90,000 visitors to the pier and are hoping to top 100,000 this year.

“Originally the pier had no facilities and we needed to attract more visitors. The new visitor centre is a little like an iceberg in that most of it is below ground level.

“This was a very complex building to construct in a very tight space below ground. The rock excavation was particularly challenging – as was the fact that we were working with a Grade 1 listed structure.

“We felt that it was important to ensure that the design of the new building did not visually compete with the historic pier structure. The visitor centre is constructed in reinforced concrete below ground, with structural glass above ground, topped with a timber viewing deck.”

The visitor centre incorporates a glazed restaurant/café and kitchen ‘above deck’, whilst at the lower level is a meeting/multi-purpose room with a dramatic new view along the pier through a large porthole window, together with toilets and storage areas. There is also a viewing deck above the restaurant.

New facilities within the refurbished Toll House, which is of Victorian Gothic design, comprise an interpretation centre with various displays and exhibitions including one about the history of the pier and shipping in the Bristol Channel, a model of the pier’s collapse during the 1970s and a Victorian style mutascope viewing machine.

The project was completed on schedule and was opened in May 2016.