Gourmet Burger Kitchen (GBK) continues to rapidly expand across cities throughout the UK, with its latest venue opening in Sheffield at the end of April this year. Located in The Moor shopping development, GBK occupies 1 storey with 90 covers internally and 20 covers externally.

Since opening on April 24th, burger connoisseurs in Sheffield have been able to sink their teeth into GBK favourites in an innovative interior that has been partly inspired by the industrial heritage of the steel city. Long time GBK design partners moreno:masey was responsible for this interior with the fit out completed by The French Group. The origins of this latest GBK venture can be traced back to March 2016, with contractors starting on site in late January 2017.

A spokesperson for moreno:masey gave Premier Hospitality a guide around the new space and outlined the significance of the project for the practice:

“At the restaurant entrance, high level tables and feature banquettes seek to create a lively atmosphere in and around the feature bar, complemented by large metalwork lighting design, a material synonymous with the area. A contrasting array of upholstery textures have been paired across the space with colour accents and hue’s offsetting the selection of floor finishes.

“A diverse yet homogenous approach was taken to the selection of tables and chairs which in turn enriches the space, unifying the scheme and offering variety to the dining experience. Alcoves of small private booths help the restaurant adorn a warming character, whilst at the rear, large open banquettes retain a sense of grandeur and scale.

“It’s always a challenge for us as designers to create a large restaurant unit in a new development that stays genuine to the GBK identity. It makes it extremely rewarding once completed to see we have been successful in keeping it true to the brand, as well as fit to the area where it’s located. In this particular case our vision for the restaurant was in itself a microcosm of the area, a modernizing city with a deeply industrial heritage.”

The main materials used internally include reclaimed timber, mild steel frame and mesh, leather banquettes and upholstery. The bar and service tops are made from marble with new timber and cement tiles used in the flooring. The front of the restaurant has been refreshed with a black aluminum shopfront and fluted glass.

Popular dishes currently being served at the venue include The Major Tom, a 28 aged beef patty, crispy bacon, beef ketchup and blue cheese slaw; and the GBK Cheese & Bacon burger. 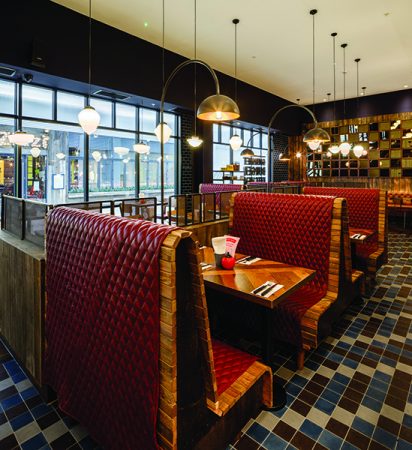 “Since opening in April we’ve been overwhelmed by the positive reaction we’ve had in Sheffield. People are loving the menu, especially the Cheese & Bacon burger. It’s exciting to be part of the developments happening at The Moor and we’re looking forward to welcoming even more burger lovers through our doors in the future.”

The site is located within The Moor, a retail led destination in Sheffield that undergone a significant revamp over the past 18 months. The arrival of GBK was included within phase two of The Moor’s redevelopment and meant other unit fit outs were being carried at the same time so a degree of coordination was required to make each individual project could function smoothly.

GBK Sheffield is the 85th restaurant the brand has opened and will create 25 jobs in the local area. GBK was founded in 2001 by three New Zealand natives with a simple philosophy in mind – to create a fresh, quality burger reminiscent of the gourmet burgers they were used to back home. They were the first to introduce gourmet burgers to the London market when the first GBK opened in Battersea, South London.