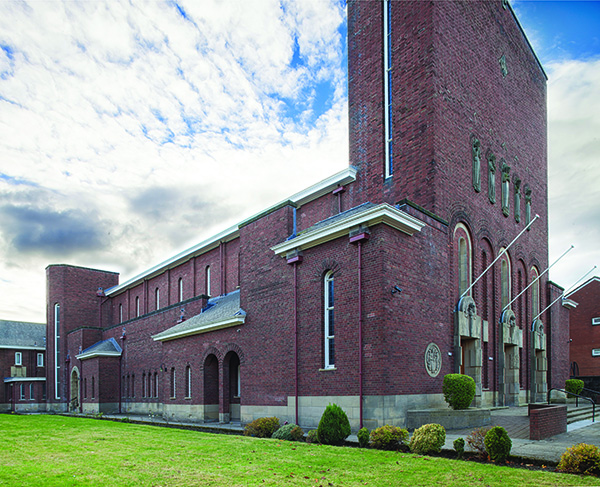 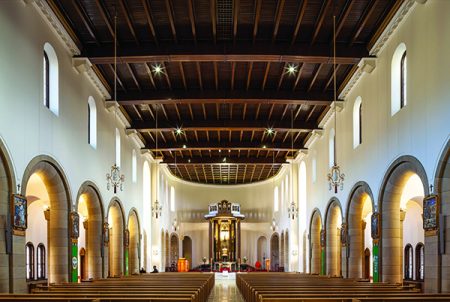 Designed by Jack Coia in the years preceding the Second World War, St Columbkille’s Roman Catholic Church was founded to care for the needs of people coming to Glasgow from the Highlands and from famine torn Ireland. The original church was situated to the east of the present church and accommodated 600 people. As the parish grew, so did the need for a bigger church, therefore the people of the parish embarked on building the church that stands today. The new church was opened and consecrated in 1940.

In 2013 Page/Park Architects were appointed to complete extensive building fabric and roof repairs. This was followed by a second phase of work which included an interior refurbishment. The refurbishment sought to revitalise the church interior and ensure its longevity for future generations. With the simplicity of the original Coia design, the intention for the refurbishment was to subtly celebrate the original architecture and bring the church back to its former glory.

The internal work was undertaken to capture the original atmosphere of the church, with repaired plasterwork and subtle redecoration, allowing natural light to elevate the simple architectural features.

Bringing the church up to date in terms of accessibility and environmental comforts were also clear objectives of the refurbishment. One of the main challenges was to integrate major new services into the building, as well as improving facilities.

The largest redesign internally was the new nave floor; a 340m2 suspended concrete floor that was installed to replace the existing floor. The new floor is structural concrete that is heated rather than having screed on top. This allows for the refurbished pews to be bolted to the floor. The heating pipes had to be set at a suitable depth in the floor build up to ensure that they would not be disrupted. The slab has therefore become the main heating element in the church, augmented by refurbished cast iron radiators around the perimeter. Insulated on the underside, steel profiled decking was laid, which the slab screed were set and then finished with a surface of limestone tiles. The pale limestone tiles were laid with random widths, to create the sense of a single flowing stone surface. 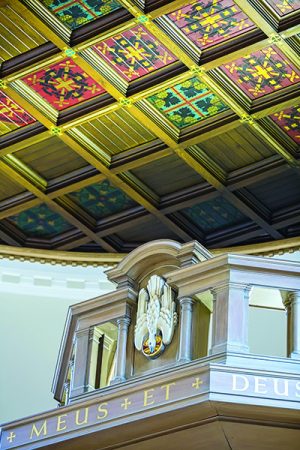 The extensive undercroft was useful in concealing the necessary new service runs and heating manifolds. Cable runs were also replaced and organised with the undercroft to serve a comprehensive new lighting scheme within the church. New spotlights were fitted discreetly to provide washes of light and to pick out distinctive architectural features. Original light fittings such as pendants in the nave were also refurbished and re-lamped. Final touches included refurbishing and hanging in place the original altar light within the sanctuary, which first featured in the now demolished gothic style church.

David Fleck from Page/Park Architects commented: “It was a pleasure to see the work of a host specialist subcontractor on the project too, most notably the marble workers. The masons were able to painstakingly dissemble, repair and reassemble the altar, bringing it closer to the congregation to provide a more intimate worship experience. The original antique marble features in the sanctuary are now unavailable, so to reconfigure the sanctuary steps at the front of the church, the existing marble was carefully lifted and re-laid, with areas of new marble carefully chosen to complement the existing.”

The refurbishment of St Columbkille’s has been shortlisted for a RICS Award 2017 in the category of Building conservation. The award winners will be announced on 27 April at the Sheraton Grand Hotel in Edinburgh.