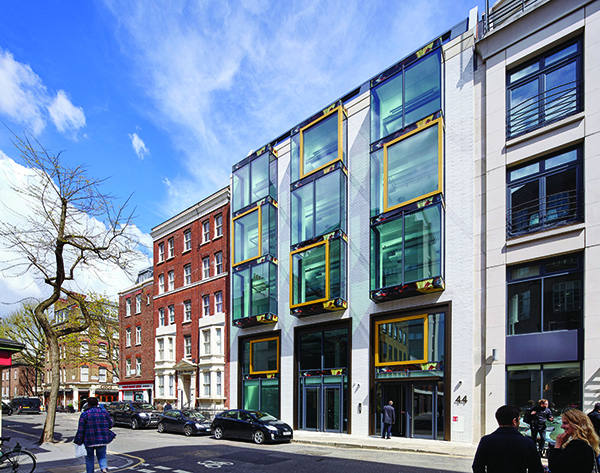 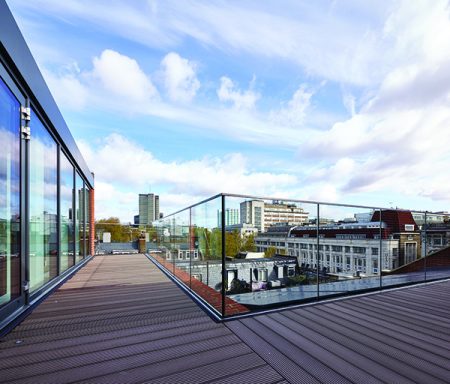 A major renovation project to create 12,000 sq ft of contemporary office space completed a year ago can now celebrate its first anniversary with a RICS (London) Award nomination in the ‘Commercial’ category.

Located in the trendy London district of Fitzrovia, 44 Whitfield Street boasts office space across six floors with abundant light, exposed ceilings and deck terraces. The redevelopment, which also involved the addition of a brand new façade and roof extension, was designed by Brimelow McSweeney Architects with 21construction acting as main contractor.

“The refurbishment has transformed the building completely, both externally and internally. There is now an abundance of natural light, a new façade and beautiful terraces at the back.”

“The developer wanted us to look at how we could extend the building to the roof and also to the rear. A refurbishment like this only succeeds if the developer ends up with more space and can re-let the building with a higher square footage than before.”

“The next stage was the façade. We presented a number of options, from simply changing the windows to doing something completely new and different. The previous façade was post-modern and alterations were considered. With the demolition of parts of the façade, it became clear that a full replacement would provide the contemporary look that the offices require and an attractive new address in Whitfield Street.”

“The roof extension is another really nice feature, with large windows that overlook Fitzrovia. Previously it felt like the building was closing you in whereas now every single floor feels different with fantastic views. A highlight is the harlequin painted on Pollock’s Toy Museum which is located in the building opposite that appears as a gold framed picture when glancing out from the first floor.”

The overall design of the building focused on enhancing the wellbeing of everyone working in it. Natural materials have been used imaginatively to create an environment that is functional, flexible and beautiful. 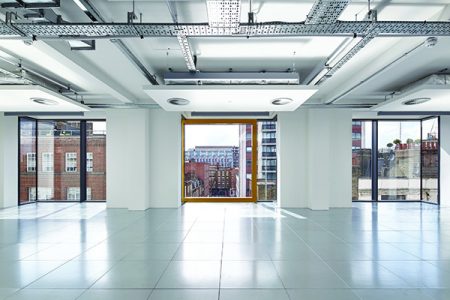 Tenants in the building can make use of an 8 person passenger lift, LED lighting, air conditioning, showers and lockers. They also have the benefit of working in one of London’s most prominent areas that continues to see its stock rise. Fitzrovia houses an eclectic mix of restaurants, bars, boutique hotels and independent shops. Michelin-starred restaurant Dabbous, for example, is just a few doors down and has been serving award-winning modern European cuisine since 2012. Transport connections are also excellent with a number of underground stations within a 10 minute walk.

It was the building’s location, however, that also proved the redevelopment’s biggest challenge, with access to the site only possible from the front and tight planning restrictions limiting the scope of work that could be carried out.

Reflecting on the most recent recognition for the work, Sheila commented:

“We were really excited to receive the award nomination. We have had great feedback from the occupiers who appreciate the building being thoroughly modern, yet displaying lots of character that fits their own style. As with the award – it would be really lovely to get this recognition.”