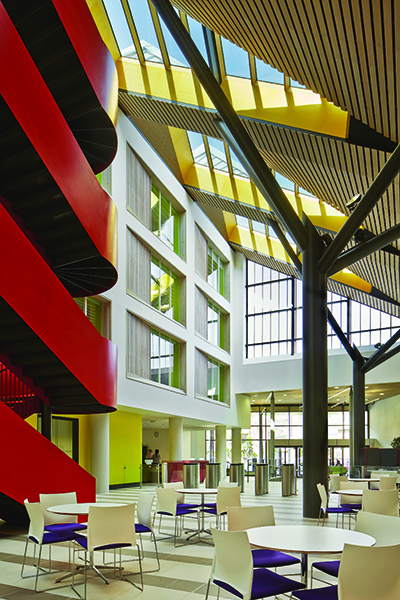 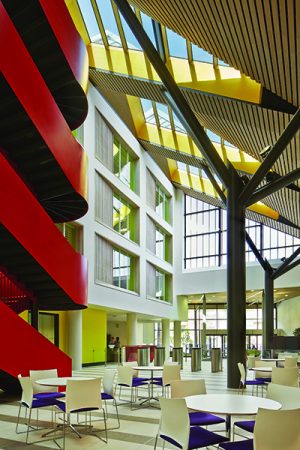 A redevelopment of Lewisham Southwark College’s Waterloo campus that has transformed learning for students has been shortlisted in two RICS (London) award categories – ‘Community Benefit’ and ‘Design Through Innovation’.

The £40 million project was created thanks to collaboration between Richard Hopkinson Architects and Platform 5 Architects. Split into two phases, work was carried out while the campus remained open to students.

The first phase of the redevelopment involved the refurbishment of one of the existing teaching wings on the campus as well as the entrance to create a new central atrium space. This phase was completed in 2015 and provided an additional 2,047 square metres of education floor space. A former courtyard was overhauled to create the colourful and inviting atrium, the focus of which is a ribbon like spiral stair. The refurbishment of the existing wing included the creation of modern teaching rooms and breakout spaces.

The second phase of the project was structurally more significant and involved the construction of a six-storey building creating a campus of 11,500m2 overall. The college provides facilities for general and specialist further and higher education along with space for continuing professional development and training.

Richard Hopkinson spoke to Premier Construction about this phase of the work and the success of the project:

“The building is a new concept in relation to how the college had functioned previously. Instead of only being interested in creating a safe environment, the public are invited into the atrium space and are encouraged to do so.

“The students are also able to enjoy this large space with a café, games, other activities and teaching spaces all opening into the atrium. The college wanted a professional, engaging and inspiring environment where students would not feel apart from the professionals but actually have their aspirations raised by being able to see them at work.

“The interior of the building is light, airy and spacious. There is a general policy of transparency in the college so you can see what is going on in the classrooms and be inspired by the variety of teaching on offer.”

The main challenge for the project was that teaching had to continue while work was carried out and this influenced the design process in terms of phasing. Constructed using a concrete frame and flat slab with structural insulated timber panels (SIPs) to improve energy efficiency, the building is clad in ceramic tiles, curtain walling and brick.

“Feedback has been fantastic. The students love it as well as people passing by because it has much more of a presence. It is a symbol of aspiration for the combined college. Historically students tended to want to stay in Lewisham because the buildings were slightly better but now they are happy at either site. We are very pleased to be shortlisted because the team has worked very hard for a long time on this project and it’s great to get some recognition.”