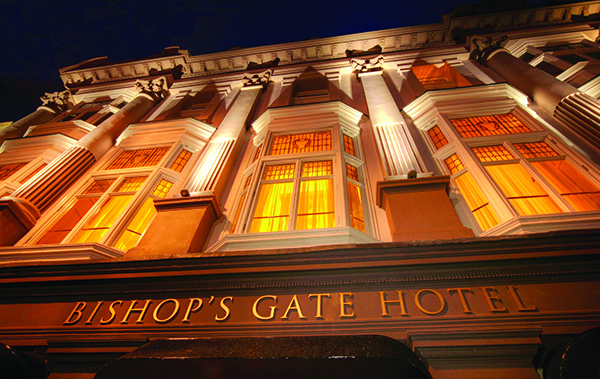 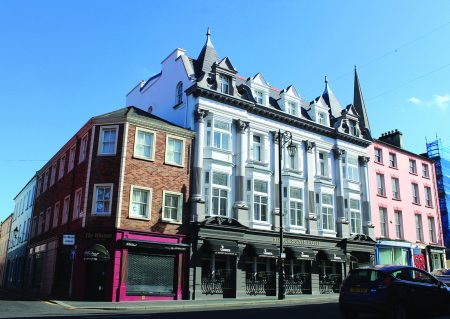 A major restoration and conversion project in the heart of the historic city of Derry, that transformed a collection of derelict buildings into one the United Kingdom’s most highly rated hotels, continues to receive acclaim.

The boutique Bishop’s Gate Hotel opened to the public in February 2016 boasting 31 beds, an 80-seat restaurant and bar and a 120-seat dining room. Since then it has received outstanding feedback and at the beginning of 2017 was named the second best hotel in the UK by TripAdvisor. More recently it has received four RICS (Northern Ireland) Award nominations.

The stylish and elegant interior visitors now find, however, is a long way from how the building looked just a few years ago. Empty since 2006, the four-storey building on London Street was in a desperate state when it was acquired by the Inner City Buildings Preservation Trust (ICBPT) – the historic buildings restoration arm of the Inner City Trust group.

Backed by a Heritage Lottery Fund (HLF) grant of £784,000, the historic building was transformed creating approximately 70 new jobs and acting as a catalyst for wider development in the immediate area. To carry out the work, Mullarkey Pedersen Architects were commissioned to lead the conversion of the protected structure into a boutique hotel.

Speaking to Premier Construction about the project Karl Pedersen, Partner at the firm, said:

“The building itself dates from pre-1830 and was originally two properties that were always occupied separately until the start of the 19th century, when an architect called Alfred Forman combined the two properties together to create what was then known as the Northern Counties building.

“At the time it was a social club for the movers and shakers the area – the people who were making the major economic and political decisions in Derry. It functioned as such for most of the 20th century but when the Northern Counties as a social club ceased to exist it went through various different permutations until around 2006 when it was left unoccupied. We were employed to bring the building back to life and give it a new use.

“The building was in a horrendous condition when we first got involved and, as you often find with properties like this, the further we got into the building the worse the problems became. I think if work hadn’t been carried out when it was the building would’ve soon been beyond the point of salvage.”

Initial works involved strategic demolition, support of historic masonry walls, the removal of decayed timber, treatment of retained timber and the removal and cataloguing of timber fixtures. From this point the transformation of the building began with the restoration of original features and the introduction of some new ones. The revolving door at the entrance to the building is the only such entrance in the city and harks back to the building’s private club days.

Inside, the grand staircase has also been painstakingly restored elegantly connecting the ground and first floor public areas. It was important, however, that the project didn’t simply mimic the past and that a balance was found between the old and the new. 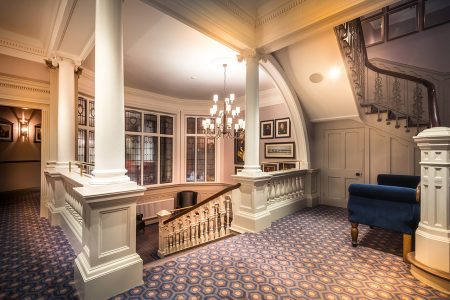 Since opening the hotel has played a significant role in regenerating the area with a thriving all-day presence. The refreshed facades on London Street and Bishop Street mean it is an attractive prospect for locals and visitors alike. The knock-on economic effect on the overall Derry market has also been felt as more people make their way into the city centre.

The substantial investment that went into creating the Bishop’s Gate Hotel continues to be industry recognised and it can now be found in four RICS (Northern Ireland) Award categories – Building Conservation, Commercial, Regeneration and Tourism and Leisure. Reflecting on this success Karl added:

“So far reaction to the hotel has been exceptionally good. It’s already won a number of awards on the tourism side after little over a year in business. The RICS nomination is something to feel proud of. It’s a very well organised competition and we’re glad to be a part of it.”

Mullarkey Pedersen Architects LLP have experience working on similarly significant conservation projects, such as St. Columb’s Cathedral and have won numerous awards during their time in operation. For more information on the Bishop’s Gate Hotel please visit bishopsgatehotelderry.com.