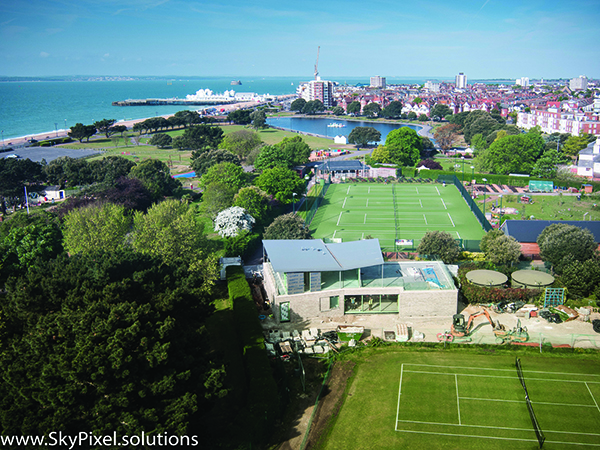 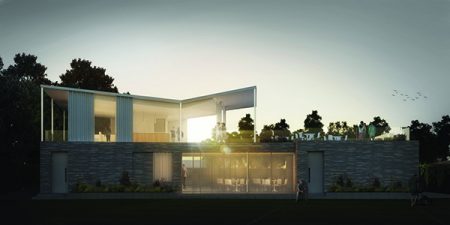 In Southsea Portsmouth, a small group of individuals formed Canoe Lake Leisure (CLL) to safeguard the future of the Canoe Lake grass tennis courts when Council funding cuts resulted in an uncertain future.

Along with managing and completely refurbishing both the grass courts and the surrounding site, the group has built four top-specification artificial grass courts for all year round play, resurfaced two tarmac courts, a basketball court and added a regulation size netball court.

The group have also created a new café, Green’s Café, which aims to bring locally sourced and healthy options to the people of Southsea and have built a replacement pavilion for the site which sits between the artificial and natural grass courts.

Work has been undertaken on the development by architects PAD studio and has been overseen by Project Manager Ed Rice.

Speaking to Premier Construction magazine about the project, Ben Munro, Architectural Assistant at PAD Studio said: “Canoe Lake Leisure has leased the tennis site from the council and have essentially turned the whole site around. They have refurbished the grass courts, which are now of international standard and have built four new artificial grass courts. They also wanted a replacement pavilion for the site and because the site is a conservation park, the new pavilion is one of the only buildings to have been built on Southsea Sea front in many years.

“A key requirement from the client was a two storey building because the pavilion site has such a great vantage point, you can see both sets of courts from it and can look out across the grass courts. The ground floor is solid and asserts itself on the site and the first floor is visually very light weight and delicate. The concept for the building has been developed and enhanced through the materials specified and how we have used them.

“It is a unique project in many ways , and the materials we have used are rare in the UK public buildings. The bricks, for example, are Danish handmade clay bricks, much longer than a standard UK brick and half as high, so that helps the building seem lower and longer. It is fairly utilitarian inside, which hopefully means it will be hard wearing but we have softened this with plywood clad areas, ash timber floors and colourful furnishings.”

“Where the footpath meets the courts, there is a junction where there is also a rose garden and mini golf course. This is a historic part of the Southsea sea front which we have looked to open up and celebrate.”

The Pavilion is due to open to the public at the end of June and the opening will be marked by the inaugural Aegon Southsea trophy Tournaments, hosted by the Lawn Tennis Association. 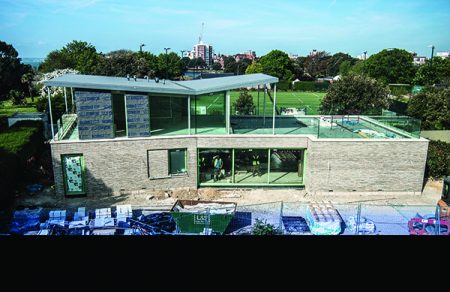 Ben added: “The whole development is going to be important for the community. The Pavilion site was previously fenced off and unsightly, attracting  Anti-Social Behaviour, so in that sense, it really is going to transform the area. It is the first building to be built on that stretch of historic parkland for many years and so far, the reception it has had has been very good, including from local residents, who were initially a little concerned about the building’s contemporary appearance.”

PAD studio is an award winning architecture practice with the feel of a small creative hub. The team work in an open plan studio which ensures a creative buzz.

Commenting on the importance of working on this project, Ben said: “It has been great and a great experience for me personally. It has been the first project in my career that I have seen through from start to finish so in that sense it has been excellent. There have been difficulties along the way but the client has been very understanding and actively involved in the process . Our Project Manager, Ed Rice, has a reputation for delivering very crafted, beautiful contemporary buildings and everyone has worked hard to deliver this. In that sense, the project has run very smoothly and relationships have developed over the time.”