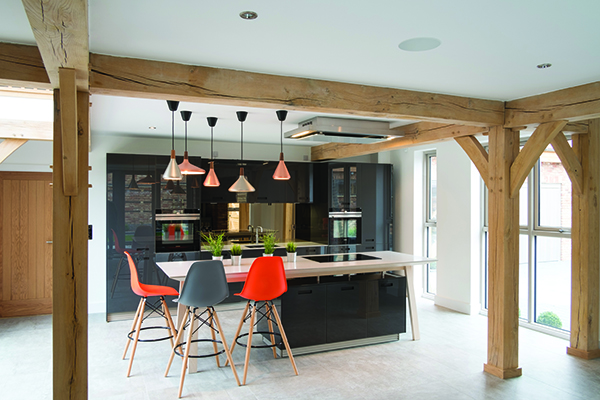 Heron’s Reach  – The pride of Draycote

Situated on the edge of Draycote Reservoir, Warwickshire, Heron’s Reach is a stunning housing development comprising six beautiful new homes. The development by Richard Palmer of HB Architects of Rugby – designed to look like a collection of farmhouses – is housed on a 2 acre site, previously owned by Severn Trent Water, with each home measuring 4,400 sq ft.

“When we purchased the site it was a little bit run down and we didn’t have planning permission, but we spoke to Rugby Borough Council and proposed the idea of a contemporary farmstead, something which they liked the sound of.

“The houses were built from an oak timber frame, with each house formed from three separate pods. During construction, we were able to pick up each pod and twist it a little, to offer something different across the six houses.

“Each house is individual in look, but internally they are the same and this made it a fairly straight forward process for construction. Once we had completed one house we were able to complete the next without any real issues.”

Spacious in their layout, each house contains up to six bedrooms, along with plenty of living spaces. A highlight of each property is the fitted kitchen, which vary in design across the six dwellings, with some offering contemporary kitchens and others opting for something more traditional.

“We used a local firm, Rugby Fitted Kitchens for the kitchen areas, as we have been involved with them on a number of projects and we work very well together.” 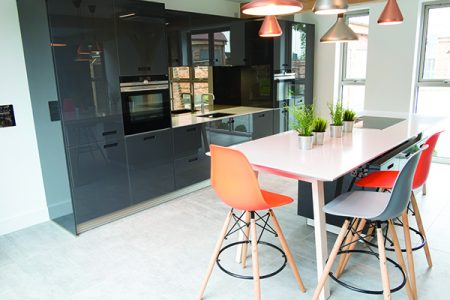 Curley Construction Ltd have a great working relationship with Tom Setchell at Rugby Fitted Kitchens, which has spanned seven years, so they didn’t hesitate to continue this relationship at Heron’s Reach. Products used in the kitchens include Siemens Flex induction hobs, integrated dishwashers, fridge freezers, LED lights, islands with quartz work surfaces and a Quooker Fusion 3-in-1 boiling water tap.

Demolition work began on Heron’s Reach in September 2015, with construction work taking place shortly after. The first homeowners moved into Heron’s Reach during July 2016 and the project reached completion by January 2017.

Such has been the success of Heron’s Reach, that not only are all the homeowners very pleased with the finished results, but the project itself has received recognition with an NHBC Pride in the Job Award. This is the first NHBC Award for Curley Construction, so understandably it is a significant achievement.

Steve said: “We were nominated by Helen Watson-Jones, our NHBC inspector. We were visited throughout the course of the project and we worked very well with Helen.

“We’ve been with the NHBC for eight years now and we find they are a great help to contractors. Any advice we needed or any problems we encountered were addressed quickly and this has made for a successful project.”