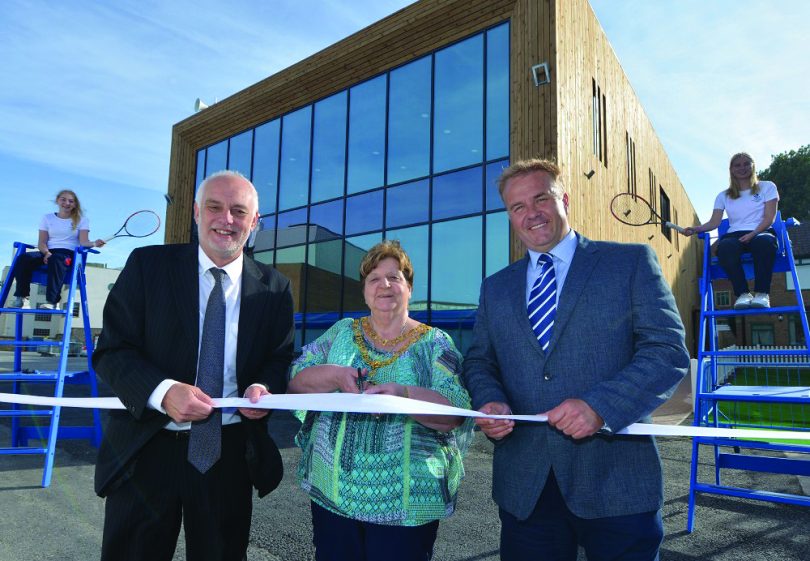 A new, world class players’ village has opened at Devonshire Park in Eastbourne to provide topflight facilities for women’s and men’s tennis.

The impressive glass-fronted two storey building was opened by the Mayor of Eastbourne, Pat Hearn, on Thursday June 15th, ahead of this year’s Aegon International which ran from June 23 to July 1.

Eastbourne Borough Council and the Lawn Tennis Association (LTA) jointly funded the building, which was designed by Levitt Bernstein and constructed by contractor Kier, as part of the £44million Devonshire Quarter scheme.

Councillor David Tutt, Leader of Eastbourne Borough Council, said: “This is a fantastic new facility befitting the prestige of the Aegon International and we look forward to the players enjoying all its various benefits next week.

“The development marks a major part of our work with the LTA to improve the tennis offer here, alongside the £44million transformation underway to put Devonshire Quarter on the map as a first-rate international sporting, cultural and conference destination.”

Oliver Scadgell, LTA Competitions Director, said: “Thanks to our partnership with Eastbourne Borough Council, we have been able to embark on this exciting and ground-breaking project in the completion of a new state of the art player facility.

“This will now enable the Aegon International Eastbourne to provide a significantly enhanced service to the best players in the world when they come to compete at the iconic Devonshire Park.”

Other tennis improvements under the Devonshire Quarter scheme include a new show court, new practice courts and increased space around outside match courts allowing players to hit the ball harder and from further off the court when returning serve and during rallies. These enhancements are underpinned by the recent installation of a modern irrigation system that ensures Eastbourne’s famous grass courts remain in peak condition throughout the year.

This year’s Aegon International marked the return of the men’s event with a line-up of top players competing including Feliciano Lopez, Richard Gasquet and John Isner.

The LTA has confirmed the international tennis tournament will continue at Devonshire Park until at least 2026.

Gary Tidmarsh, Chairman at Levitt Bernstein, said: “The new players’ village will provide world class facilities and its completion is an important step in the transformation of Devonshire Quarter, together with our proposals for the park’s theatres, new conference centre and open spaces.”

“This fantastic project, delivered through the Scape Minor Works framework, will play a key role in the wider £44m Devonshire Quarter scheme to provide a top quality sporting, cultural and conference destination in Eastbourne.”