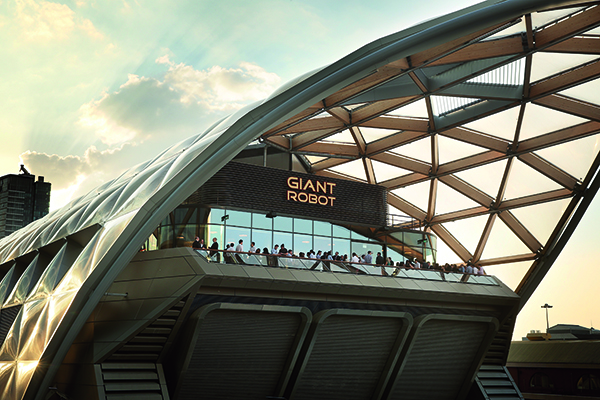 Giant Robot, a brand new, seven-day-a-week street food arena has opened at Crossrail Place in Canary Wharf. Launched in April 2017, Giant Robot brings together a line-up of some of London’s best street food including a tiny tapas bar from Josė Pizarro – Little Josė – plus two brilliant bars, creating an eating and drinking rooftopia in E14.

Sitting at the east end of London’s biggest roof garden and offering over 10,000 square feet of eating and drinking space, Giant Robot offers panoramic views of Canary Wharf as well as all day dining and drinking. The indoor space, featuring a huge, wrap-around outdoor terrace will be Street Feast’s first seven-day-a-week venue and marks the rapid expansion of the company, which launched in 2012.

Speaking to Premier Hospitality Magazine, Jonathan Downey, Co-Founder of Street Feast commented: “This is our fourth site now so it is important that it is a success so we can move forward with the next, which we are already going ahead with. It is just a fantastic location: the site is a large wrap around terrace with great views and we just wanted to do something really fantastic there.”

Since launching in 2012, Street Feast has transformed derelict and disused spaces into unique eating and drinking environments, all bringing great street food, brilliant booze and vibes to people around London. From car parks to old markets and rooftops to office blocks, Street Feast has taken over locations across the capital including Dalston, Lewisham, Canada Water, Battersea and Bermondsey, with loads more exciting plans for 2017.

Jonathan added: “We have four venders at Giant Root at the moment and are looking at getting two more in, if we can get a cart into the site.”

Combining futuristic with retro and industrial with luxury, the feel of the space is described as ‘spaceship engine room, meets art-deco cruise liner.’ Inside, Giant Robot combines concrete floors and retro furnishing under a translucent, wood-framed dome offering shelter from the rain. However, the most obvious feature Giant Robot possesses is a giant metal frame and retro-front sign offering those on the outside the spaceship/robot feel that is presented to diners inside.

Open for lunch and dinner, leave your soggy sandwich in the office fridge and grab a Sub-Ibėrico with pork meatballs and manchego from Little Josė or a Bun Box from Yum Bun – two fluffy buns stuffed with delicious Asian fillings. Try their meaty sticky Slowly Roasted Pork Belly Bun with green chilli and coriander.

Head down after work for fantastic cocktails and craft beers. Stop off at Little Josė for a glass of sherry and an order of Crispy Fried Squid ‘Boca’ with aiolo and sensational Spicy Prawn Fritters with lime mayo. Then make a move to Thunderbird and share a pile of Chipuffalo wings with a side of fries drenched in Awesome Sauce or try their Fried Chicken Burger with Rosemary Maple Aiolo, before visiting BOB’s Lobster for sensational seafood such as Ahi Tuna Tacos with fiery wasabi guacamole and chipotle cream.

Free to enter, Giant Robot is open Sunday to Wednesday, 11am-10pm and Thursday to Saturday from 11am-1am. 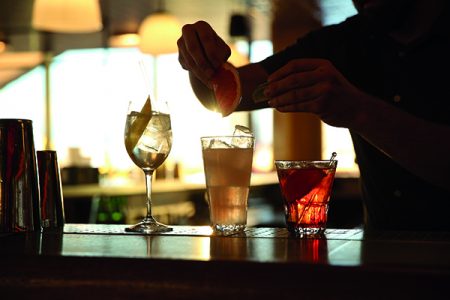