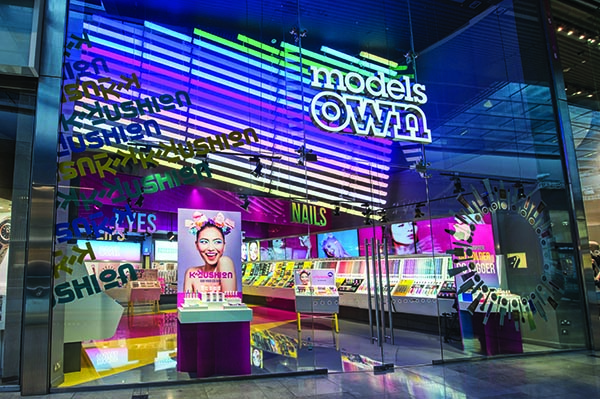 One of the fastest growing cosmetic brands in Europe, Models Own has built a strong reputation for its exuberant, fun and creative products. It has a full range of high quality yet affordable colour cosmetics, beauty tools and brushes.

As part of the growth of Models Own, the past six months have seen the brand move onto the high street with two flagship stores in London and Leeds. The bold and innovative design of these stores has already had a significant impact for Models Own, helping to make the company stand out from its competitors.

The two new stores build upon Models Own first forays into retail through their popular Bottleshop concept. Working with award-winning design studio The Yard Creative, the Bottleshop firmly put Models Own on the map. It consisted of a large-scale nail varnish bottle that was fully shop-able. The first Bottleshop kiosk opened in Westfield White City, London in April 2012 before expanding to locations around the world including Mexico, Tokyo, Thailand, Taiwan and throughout the UAE.

Looking to capitalise on the traction gained worldwide by the Bottleshop, Models Own once again teamed up with The Yard Creative. The result was a bolder, more permanent high street presence known as the Boxshop which came as the brand extended and expanded its portfolio of products. The flagship Boxshop for Models Own opened in Westfield Stratford City towards the end of 2016.

The design of the store was inspired by the idea of a make-up box with the core categories like eyes, lips, face and nails wrapped around the edge. The centre of the store was then reserved for more theatrical elements like a play table for exciting innovations and the latest products. A particular focus was placed on designing a user friendly store that helped shoppers understand how to use the products with in store graphics providing advice and guidance. 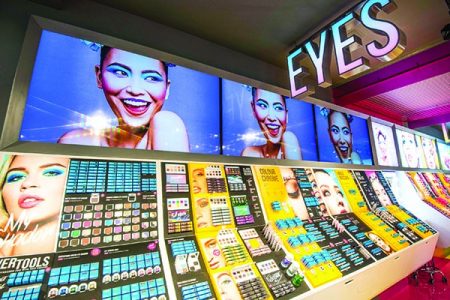 Much like its predecessor, Boxshop proved to be a major success with its unique approach to cosmetic retail providing consumers with an alternative choice. Following on from this as part of Model’s Own’s global retail roll-out, a second Boxshop store opened in February 2017 in Leeds.

Sticking with what had already proved to be successful, the brief was once again to empower the consumer to play and have fun with make-up. The store stands out in a world that is dominated by black and white. The heart of the space is the play table, which to begin with took some convincing on the part of The Yard Creative founder Steve James-Royle and his team. The bold colour palette, however, was something that was always agreed upon. The explosion of colour plays an important role in setting expectations before customers have even stepped into the store.

The decision to open this second flagship in Leeds comes at a time of the retail and leisure sector in the city continues to grow at a rapid rate. Located in Trinity Leeds shopping and leisure centre, Models Own Boxshop is in good company amongst 120 other shops, restaurants, bars and a cinema.

“In addition to Models Own, The Yard Creative has worked across a number of separate retail projects including the ground-breaking Story Shop. Founded in 2006, The Yard Creative is a strategic retail design agency providing core design services of research, strategy and design to help accelerate business growth for challenger brands. The studio has won a number of awards during its time in operation and this year alone has been recognised at the DBA Design Effective Awards, the Revo Opal Awards and The 19th FAB Awards.”

Guided by The Yard Creative, Models Own is changing how cosmetic brands can market themselves on the high street. The bold colours and innovative play table helps Models Own communicate with customers in a new way and pushes retail boundaries. 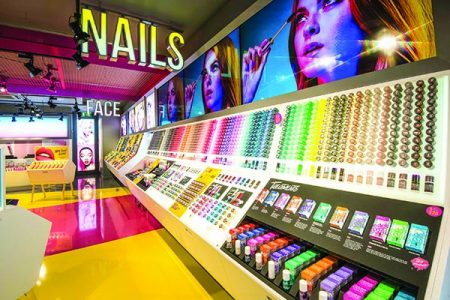