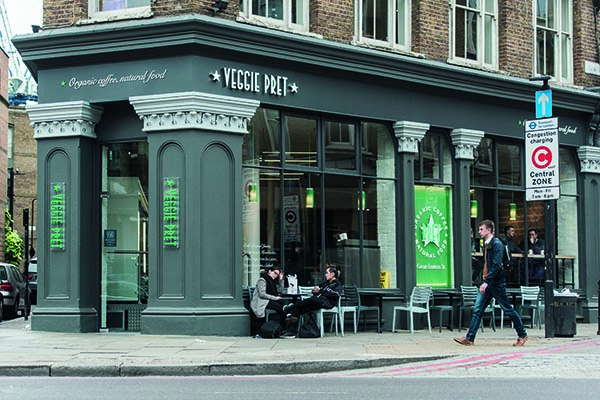 High street giant Pret A Manger has been pioneering natural food since 1986. Serving freshly made food alongside organic coffee, Pret has become a household name around the world serving more than 300,000 customers each day.

During its 30 years in operation the company has grown and adapted with changing customer habits. In April 2017, Pret A Manger opened its second vegetarian-only shop, this time in Shoreditch, East London. The store follows on from the success of the first Veggie Pret, which initially opened as a pop-up in Soho before later turning into a permanent fixture following customer demand.

The design of the second Veggie Pret store builds on a concept initially revealed in Soho and has been brought to life thanks to collaboration between Your Studio and Pret’s in house creative team. Tom Edington, Associate Director of Environments at Your Studio, spoke to Premier Retail about the work:

“Pret A Manger is one of our longstanding clients and we tend to work on new thinking pieces for them. We get heavily involved when they want to bring something new to the market.

“Obviously because this is specifically a vegetarian store we’ve done some tweaks to the existing Pret branding to give it a fresh, green look. From the approach and throughout the store to every touch point there is a fresh feeling and an evolved Veggie palette. We’ve introduced some new materials to lift the whole ambience of the space, it was imperative the store felt calm and inviting.”

“This store also has a basement area that previously felt very cosy but we wanted to give it a new lease of life. It now has a lighter palette that has freshened up the feel of the entire floor and we’ve put a greater emphasis on sharing tables than individual spots to make it more of a social space and meeting space.”

Pret’s new graphic direction works seamlessly in the interior showing new materiality, such as white handwriting type applied to wood chevron panels. The new lighting concept allows the interiors to adapt to the outside weather, therefore the store can become brighter inside on a dark winter day.

The building’s facade has been painted in classic tones of grey which pick out the architectural details and give a more sophisticated restaurant feel to the approach with more seating in the window space. With a stronger street presence, the store has more kerb appeal to stand out on Great Eastern Street.

Since opening, Veggie Pret has generated a great deal of buzz, especially on social media. Reflecting on the importance of the project Tom added:

“There’s been an overwhelming response since the store opened, and we’ve been getting so much fantastic feedback. It was a lot of work for all the teams involved, and it wasn’t without a fair amount of stress, but the outcome was definitely worth it because it’s a quality finish and a lovely space to be in. Hopefully we’ll be able to carry on building with Pret.” 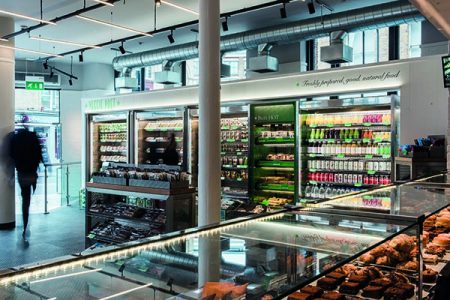