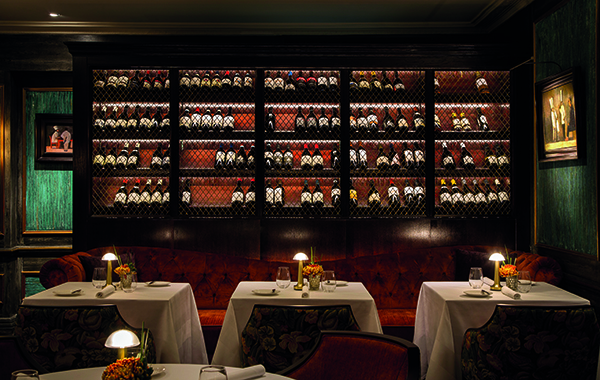 Roux at Parliament Square has recently reopened following a month long refurbishment. The fine dining restaurant, which is headed up by MasterChef: The Professionals winner Steve Groves, opened for business again on 4th September with a more modern look and seasonal menu.

The previous white and purple themed dining room has been redesigned with grey and teal furnishings, panel lined walls and velvet banquette seating. A new wine display also covers the back wall of the restaurant and is visible through the restaurants windows on the street and acts as a beacon for the main dining room.

Work on the redesign was undertaken by Rosendale Design, who have recently completed other high profile projects such as The Game Bird, at the Stafford; Jason Atherton’s Canadian Pop-up at Little Social and The Ninth for Chef Jun Tanaka, which was recently awarded its first Michelin Star.

Speaking about the project, Dale Atkinson, Rosendale Design Director said: “What we found when we were looking at past reviews was that people were saying that the food was great but the space was a bit tired and somewhat flat. When you walked into the space, your attention wasn’t taken anywhere and there were no focal points. Some of the positive feedback was that it was homely and felt like you were in someone’s dining room so we thought, lets harness the positive aspects and give the space a bit more of an identity.”

The refurbishment has enhanced the restaurants elegant 1920s feel and has introduced more modern influences to give the space a contemporary lift.

Dale added: “Roux at Parliament Square is located in an old Georgian house and when people were being taken to the back room, The Drawing Room, to dine they felt like they were being taken away from the main area and all of the hustle and bustle so our biggest challenge was to create a space that overcame that. With the design, both rooms are pretty much designed exactly the same and when you go from one to another, you don’t feel like you are going to a lesser space. It was always called The Drawing Room but there were no drawings or references as to why it was called The Drawing Room so we have found some old architectural drawings, from RIBA, of the square itself and they will be framed and hung up in that space.”

Following the re-design, Roux at Parliament Square now perfectly mirrors Steve Groves’ style of cooking – classic, with a modern approach. Panelling lines the walls of the restaurant to enhance its historic feel, whist up-to-date grey and teal finishing’s modernise the space. The focal point is now an impressive wine display covering the back wall. Lighting is also a main feature throughout the restaurant with layered lighting used to create a warm and homely atmosphere.

Dale added: “One of the big challenges on the project was introducing new lighting detail. Before it was just a few chandeliers and wall lights, and flat walls with a few picture lights but none of them were installed properly, so we needed to create these visual focal points using light to draw people in.”

A new seasonal menu has also been introduced by chef Steve Groves to fit the new design. Groves joined the restaurant as senior chef when it opened in 2010 after impressing Michel Roux Jr during his time on MasterChef in 2009. He was named head chef in 2013. The new menu includes datrois of veal sweetbreads with corn and girolle mushrooms, Dorset crab with apple dashi and pear with chamomile, heather honey and pistachio.

Rosendale Design was appointed to work on the Roux at Parliament Square project following a number of other successful projects completed by the company.

Commenting on the importance of the project, Dale concluded: “When I started the company three years ago, I always said that if I could maintain working with the type of clients that I had worked with previously and work with them in the future then I would be really proud of what we had achieved. When this call came through, and working with some of the other chefs that we have worked with, it is something I always hoped would happen and I am thankful that it has. To be honest Roux is a genuine gentleman of the culinary world.” 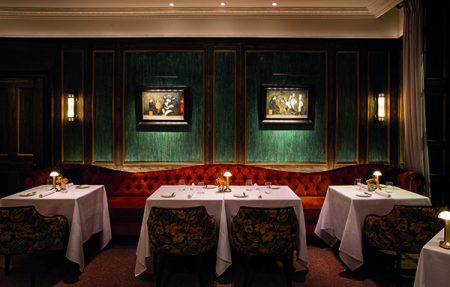 Giasullo Engineering started out in Italy in 2007, with a focus on real estate and project management, before moving into shop fitting and general contracting works in London from 2015. Most recently, the company has opened a new branch in New York.

“For us it is very important to coordinate all stages of the refurbishment process, especially when work takes place within a historic building such as this, just few steps away from Big Ben. We are proud of delivering our finished product to the hands of Chef Roux and it has been an amazing project to work on!”

“Giasullo Engineering is a third-generation, family-run business and I am very proud of all my labourers who are very skilled craftsmen.”