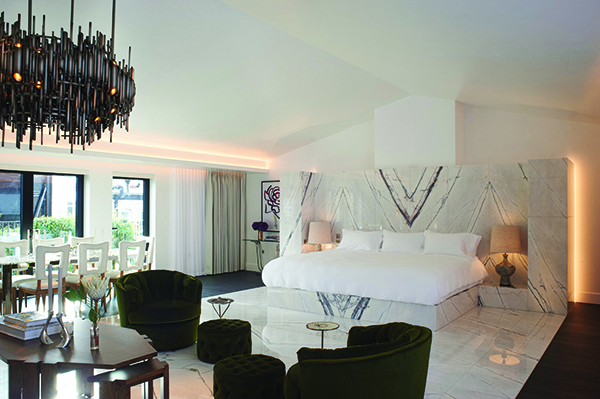 The Mandrake, a new independent boutique hotel from entrepreneur Rami Fustok, will open in London’s Fitzrovia this September. Boasting 34 stylish and eclectic bedrooms, including three luxury suites and a dramatic penthouse, The Mandrake will also be home to a restaurant from the team behind Hong Kong’s Serge et le Phoque.

Inspired by the medicinal properties of the Mandrake plant, the hotel combines eclectic, vibrant interiors with extraordinary art, intriguing soundscapes and specially designed scents. The result is an ambiance that is intimate, distracting and intriguing at every turn. Housed in a converted RIBA award-winning building on Newman Street, The Mandrake is the result of a project nearly five years in the making.

Together with leading practice Manalo & White Architects and main contractor BECK, Rami Fustok has created an oasis of tranquility that features his personal touches at all levels. To find out more about one of the most exciting hotel openings in the UK this year, Premier Hospitality spoke to Manalo & White founder Brian Greathead about his role in the work:

“I’ve been working with Rami for the last thirteen years, and he’d often talked about his dream of creating a unique hotel. Just over five years ago he came to me and said he’d found the perfect building at 21 Newman Street.

“The initial brief he gave us was visual. He showed us lots of images of his ideas and inspirations. The space between the two buildings had got him particularly excited, because it presented the opportunity to create a planted oasis in the centre of London, with the hotel rooms focused around it. The initial dream was to create a hotel wrapped around this magical green interior world. 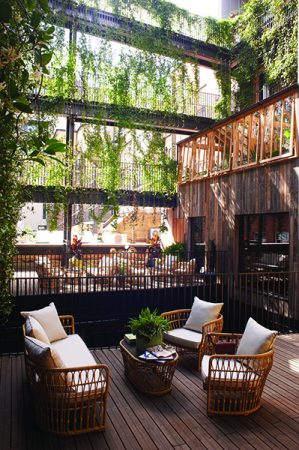 “There were a lot of ideas, and over time we were able to test them and incorporate them into the design. It started off with Rami, and as he went on this journey he picked up new members of the team, who brought their own ideas to increase the overall richness.”

Prior to its purchase the building contained offices. When work began on site in March 2015 it was stripped back to its shell with all heavy construction work done under the first contract. The fit out contract began immediately afterwards, and took just over a year to complete before finishing in June 2017. Brian continued:

“The building is very low key on the outside, and we rebuilt the frontage to look like a traditional London shopfront. The only signage is a small sculptural icon of the logo of the hotel; there’s no writing on the outside of the building. Customers enter through a gate, into a long dark tunnel with a specially composed soundscape. This creates a transition between the street and world inside.

“The tunnel leads into a double height lobby and reception space with windows above and all around. The walls are lined with an organic, artisanal concrete finish. There’s a chandelier filled with candles that lights the entrance space.

“Internally it looks like no other hotel you’ve seen before. It’s an expression of the personality and aspirations of the owner and the intended clientele. All the spaces on the ground floor are focused around a central courtyard; the social heart of the hotel which brings light into the lobby, restaurant and bar and provides a connection with the outside. Hanging plants are growing above on all sides.”

At the forefront of The Mandrake philosophy is art, with an enviable collection that has been carefully curated over many years. Included within this are works by Francesco Clemente, Jonas Burgert, Peter-John de Villiers and a host of other artists, intriguing soundscapes from French sound engineer Pierre-Arnaud Alunni, specially designed scents from Azzi Glasser and a 30-candle chandelier by Lara Bohinc.

The Mandrake will have an Artist in Residence programme that will commence in October, launched by world renowned tattoo artist Mark Mahoney.

On the food side, the team from the critically acclaimed Michelin-starred Hong Kong restaurant Serge et le Phoque will be opening their first London venture. Serge et le Phoque takes a radical yet refined approach, using modern French techniques and only the finest ingredients. The beautifully designed 80-cover restaurant will feature a 16-person private dining room with its own entrance. Brian concluded:

“There were a number of challenges along the way. It was a monumental effort of organisation and communication but everything harmonised in the end. This is probably the job I’ve been most personally involved in. I love working with Rami, and I really believed in the project from the beginning. It was so complex, I felt the only way to fully realise the vision was to roll my sleeves up. I thoroughly enjoyed helping to figure out the details, and as a company we’re extremely proud of the results.” 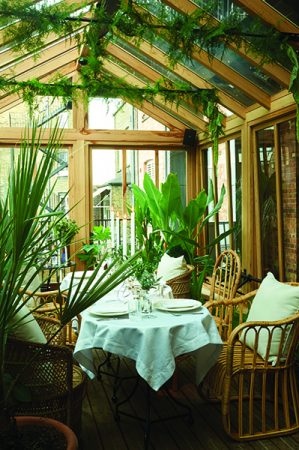 In the past, Carr Grange Joinery has worked with a whole range of clients – including some big names in the retail and hospitality industry. To name a few, their projects have included working with clients such as John Lewis, Radisson Group, Park Inn Group and Lufthansa.

The Mandrake Hotel was another project that Carr Grange Joinery was involved with. The joinery company were responsible for the manufacture of the greenhouse within the grounds of the hotel. During the construction, they worked alongside Beck Interiors. Beverly Round of Carr Grange Joinery told Premier Construction:

“Beck Interiors are a highly respected company dealing with high end clients and always deliver a first class project – so it was really important for us as a company to get involved with the venture.”

Specialist fit out contractors in luxury hotels, super-prime residential, leisure, retail and museums, BECK have an exceptional and unrivalled reputation within the industry. Established in 1994, BECK is a privately-owned company, led by a home-grown directorship. Based in Chessington, Surrey (15 miles from Central London) BECK’s HQ houses a 68,000 sq. ft. factory, which produces much of the bespoke joinery for their projects.

BECK was honoured to have been appointed as the main fit out contractor on The Mandrake. A scheme from the outset BECK ear marked as a key focus for them, “there was something truly unique and special about this project,” said Chris Galloway, Managing Director of BECK. He added: “It was absolutely a hotel we wanted to add to our portfolio. We’re delighted with the end result and the whole team involved in the delivery were superb.”

BECK pride themselves in delivering all projects to the highest quality possible for each and every one of their clients. Their attention to detail is key and positive feedback and repeat work is what they aspire to. 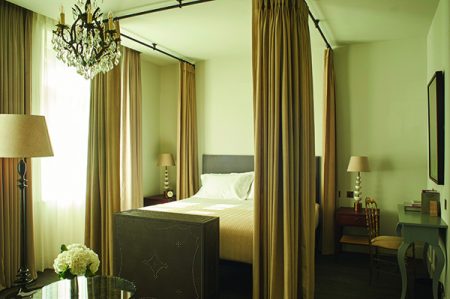