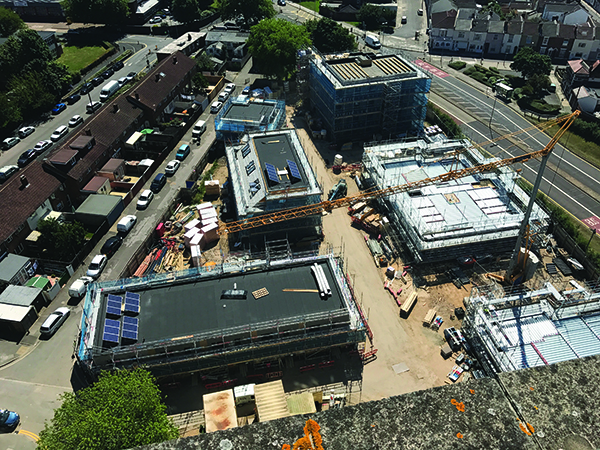 A multi-million pound housing development in the heart of Portsmouth is beginning to take shape, with the aim of providing 60 new properties. Known as Ivy Close, the development is replacing a tired 24-flat tower block that used to sit on the brownfield site.

The 60 new properties are split into nine houses and 51 flats spread across three blocks. Work on the project began in January 2017 with an original scheduled completion of June 2018. However, work has progressed so well up to this point that main contractor PMC Construction has advised the development will now be ready in April 2018.

“It’s a brownfield site that used to have a health centre and a GP practice as well as 24 flats built above that facility. It was a part two storey, part eight storey development and the flats were over 50 years old. We built a new community hub building recently and moved these health services into it, which freed up this site.

“Where we had 24 flats before, we are now providing nine houses, including one disabled property as well as 51 flats over three blocks. The site wasn’t very efficient before and had a very complicated car park area that wasn’t managed or maintained. The whole arrangement couldn’t be utilised until the GPs moved out. While we would’ve liked to provide more houses in the centre of the city, it was more beneficial to provide flats and maximise the sites potential.”

Presently, the first five houses have been completed with only gloss work and vinyl flooring left to be finished. The house designed specifically for disabled access is also beginning to take shape. Work on the flats began with the construction block C as this structure required a separate crane. The shell and frames for block c are all complete along with the brickwork.

Blocks A and B have one and half storeys left to be built and will be complete by the end of September. The use of a Metsec frame, which is a lightweight structural frame, allows a floor to be constructed in approximately ten days.

Despite the rapid progress of the development, a number of challenges have presented themselves along the way. When complete, however, Ivy Close will mark a significant step forward for social housing in Portsmouth as Adrian explained:

“There is some historical contamination of the site so we’ve had to do a lot of remediation work. Believe it or not we also had to do some unexploded bomb survey work. Whilst no known bombs were found to be in the area, there was a pattern of bomb explosions that indicated there may have been some undiscovered. Where there was any historical soft landscape that hadn’t been built on we had to do radar surveys for unexploded devices. It was a first for me!

“This is a fantastic project for Portsmouth. For Portsmouth City Council to start getting to a decent cycle of providing new, affordable council home is fantastic for the people of Portsmouth. To be able to offer these quality properties to people is great.”

A separate council housing scheme is also underway to provide a total of 48 new homes – a mixture of houses, flats and accessible flats – at Blendworth Crescent in Havant. 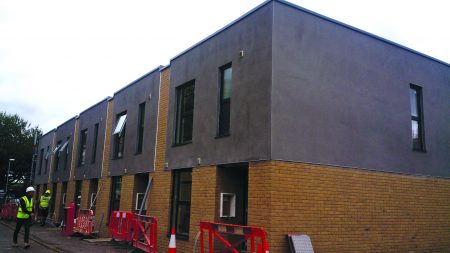