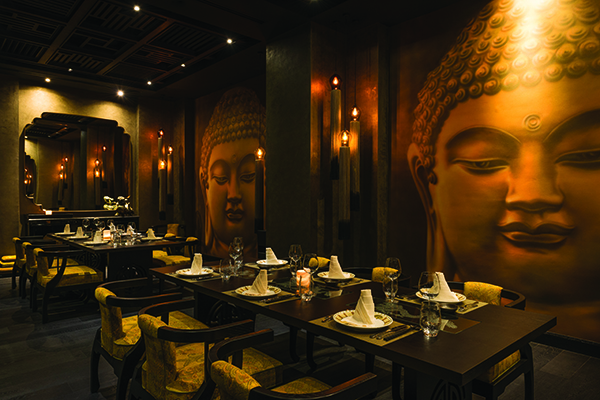 The Buddha Bar in Dubai has reopened following an interior refurbishment by LW designers who aimed to ‘improve and reconfigure the Bar to make more effective use of space’. The interior design firm have embraced the traditional Chinese, Tibetan and Ottoman cultures adding artwork which integrates these ideas into the bar’s sophisticated new layout.

The bar was originally designed in 2005 by the same designer as part of work on the Grosvenor House Hotel and it has since been decided that the image of the bar needed refreshing.

Situated on the second floor is a new bar which showcases an abundance of gold, red, purple and green, accompanied by an intricate and elegant Dragon mirror. Stencilled artwork has been engraved into the black stone flooring to link corridors to the bathrooms which helps meet the visual requirements of this splendid refurbishment.

Head designer at LW Dubai Pia Sen, said: “The colours are very representative of Asia. The purple has always been a royal colour and the gold has been a part of Asian culture for centuries. It needed to be very decorative, with lots of the colours that were used during this time.” 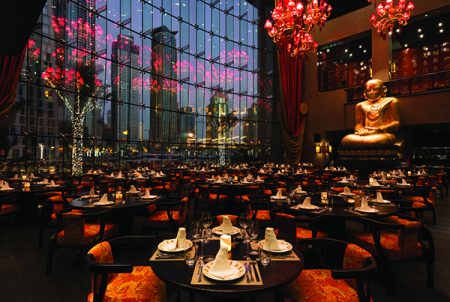 The large chandeliers have new shades and trimmings, whilst the bottom of the stairs is guarded by a pair of bright red foo Dogs. Sen said: “The changes to these lights were very important, it is a very moody and a very theatrical place and the colours have to represent this.”

Moreover, dining chairs had been redesigned to appear more vividly.

Despite all the change, the imposing monk statue still remains central to the restaurant but has had a fresh coat of Gold to refine its standout appearance.

Despite the elegant design of the refurbishment Sen highlighted the challenges that they faced during the project. “The atrium was eleven metres high, and I’d never worked on anything this high before which was a big challenge. It was also difficult to place the stairs, as there were structural beams which covered some areas, but it all came together well.”

As a whole, the Buddha Bar has been modernised and refreshed to more accurately and intricately trap the feeling of the Buddha, yet despite this change the whole essence of the original Bar has remained firmly intact. As a result, the project has recently been declared a finalist for an SBID Award 2017, under the ‘Club and Bar Design’ category.

When asked about the importance of this achievement Sen told Premier Hospitality, “It’s really important for us, this is a Dubai based company and we’ve been working for a number of years in the Middle East.

“For us to get exposure in the UK and be recognised in the UK is really quite an achievement. For us, this is about helping us with our exposure as it shows people in the European Market what we can do.”

“It’s been an amazing project for me to be involved in, as it’s something most people can relate to – because a lot of people have been to a Buddha Bar either in Paris, Lebanon, NY or Monaco.  As a result people are so wild about it, which makes me really proud of this.

“It has been one of the most exciting projects of my life, because the creator of the original Buddha Bar concept, Raymond Visan with whom we worked closely, was such an interesting, charismatic person, which made it a really fun project.” 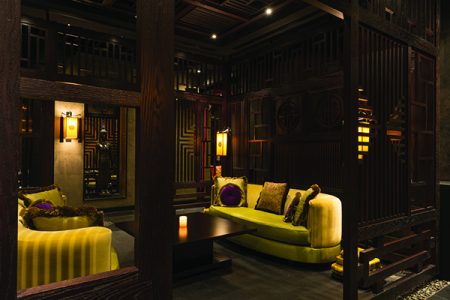