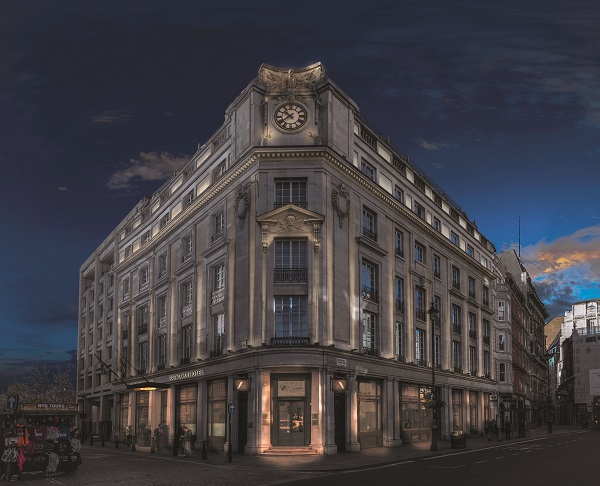 Overlooking one of London’s most iconic landmarks, The Trafalgar St. James hotel has relaunched after undergoing a major makeover. One of the capital’s most centrally located hotels, the rooftop bar, The Rooftop, overlooking Trafalgar Square has also been given a remodel and will be open to the public later in October 2017.

While previously it had a tired look and was beginning to show its age, the hotel now has a modern, classic type feel. SHH Architecture & Interior Design was tasked with reflecting this style in the bedrooms and the popular rooftop terrace. SHH Interior Designer Georgia Stevenson said:

“It’s a very unique location overlooking Trafalgar square and the rooftop is like no other with the views it offers. For the bedrooms we put in a number of features including wallpaper, a new set of joinery, an entertainment system with a minibar and TV and new wardrobes.

“The colour scheme we went with can be described as bold and dynamic. The colours chosen are uniquely British so as a guest you’ll see a lot of deep blues with highlights of red and deep burgundy. We also worked with an artwork studio and you’ll notice in the corridors there’s some quite contemporary artwork.” 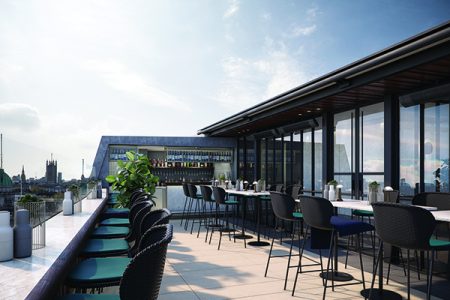 When completed, The Rooftop will house a destination bar and restaurant. Open all year round The Rooftop will utilise retractable canopy roofs to cope with the unpredictable British weather rather than more permanent structures. SHH Creative Director and Co-founder Neil Hogan added:

“The concept is twofold really. We were aiming at a global traveller market so that’s both business travellers through the Hilton demographic and the tourist trade. Obviously it’s a prime location for both these groups being so central. The global traveller was the background brief of the bedrooms but the actual design is very connected to Trafalgar square and location through its use of artwork and decoration.

“In terms of challenges there are a couple of things that stand out. It’s a very sensitive location from a planning point of view so the rooftop development underwent an extensive planning negotiation because it’s about keeping the prime views from Trafalgar square. Light pollution also has to be considered along with health and safety issues of people being on a roof.”

When finished The Rooftop promises to be one of the most sought after destinations in London, while the new rooms are already proving to be a popular addition.

The ground floor has also been given a makeover courtesy of AvroKO including the reception area, lobby lounge, bar and restaurant. Adam Fermerie, AvroKO Principal, commented:

“It’s great to be working in London because it’s something we’ve wanted to do for a number of years. This project with L&R is a great opportunity to bring a slightly different hospitality design perspective to what is already an incredibly diverse and creative f&b community.”