Dr. Martens’ flagship store in Camden, London has been shortlisted for three awards at this year’s Retail Week Interiors Awards 2017.

Situated in the Camden Market area – the brand’s spiritual home – Dr. Martens Camden is the brand’s 28th UK store. Trading across two floors, of approximately 4000 sq ft, the flagship store employs a crew of 25 and is a fantastic example of retail excellence.

Throughout the store there are a number of stand-out areas and features, including a specially commissioned, one-off piece of art from Specials bass player, Horace Panter. The musician has interpreted the brand’s deep rooted link to youth subculture through his own unique take on Camden.

Interactive elements throughout the store include a free GIF booth for consumers to engage with, plus a designated area for artists and fans to personalise their favourite DM’s old and new.

To complement the new flagship store, a brand experience space has been created, which sits next to the main retail floor and features a permanent stage and backline supported by Marshall Amps and Natal Drums. Throughout the year a full programme of music with online radio specialists Mixcloud is being broadcast in store.

Earlier this year, ahead of the store’s opening, a spokesperson for Dr. Martens, said:

“Dr. Martens has a long-standing relationship with music and the creative communities, so having an area which fans can access and use to showcase their talent will be a really positive thing – especially to London’s music venue scene which is under ever-increasing pressure of closure. We very much see this exciting new store becoming a cultural hub for the brand, its fans and Camden.

“By opening a store in Camden Market it allows Dr. Martens to have a conversation with both our local and international fans against the backdrop of the alternative and vibrant community of Camden. It also positions the brand in its rightful home – an area steeped in authenticity and musical heritage.”

Additional features of Dr. Martens Camden include music memorabilia and original items donated by The Joe Strummer Archive, Pauline Black & Twin Atlantic, as well as a Virtual Reality experience, powered by Oculus. The VR experience gives customers the opportunity to take a virtual tour of the brand’s original UK factory – the place which made the first pair of DM’s on 1st April, 1960 and still makes special edition products to this very day.

Dr. Martens Camden carries the full range of Dr. Martens products, including men’s, women’s and kid’s footwear. In addition, the store also boasts an extensive range of industrial products, which sit at the heart of the brand, as well as limited edition designs exclusive to the store.

Footwear styles all sit on chunky outsoles, use soft oily leathers and feature a pilgrim stitch toecap. All styles have chrome hardware, chrome heel-loop stitching and matching Made for Camden chrome emboss on the footbeds – all of which are underpinned by the yellow stitch synonymous with DM’s. 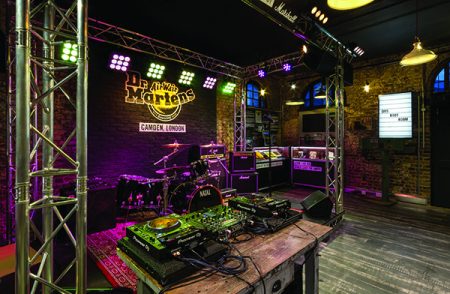 NoiseBoys Technologies Ltd specialise in creative audio and lighting for professional venues and one-off events. Two friends who had previously been working in project management and live events for their whole careers formed the company in 2009 after noticing a widening gap between technology and the people who had to use it day-to-day.

NoiseBoys have an impressive portfolio of projects, having worked with everyone from Grade I listed Leicester Cathedral – where they helped broadcast the burial of King Richard III live on Channel 4 – to cruise ships, skate parks and more. Most recently, NoiseBoys has been involved in Dr. Martens, Camden.

“We were approached with an idea and a visual of what would become The Boot Room, and it was our job to turn the idea into reality. The brief was to create a professional gig venue within the shop but without touching the fabric of the building, and that’s what Dr. Martens now have.

“We designed, supplied and installed everything from the stage to the lights to the DJ decks to the cables that connect it altogether. Our in-house staff also support Dr. Martens on an ongoing basis, mixing for gigs when needed.”

“We love turning a creative vision into a reality that compliments its surroundings, be that through the use of light, audio or visuals. One of our biggest strengths is fitting technology around the people who use it every day, whether they’re technicians or not, which means that we deliver creative ideas that actually work in the real world!” 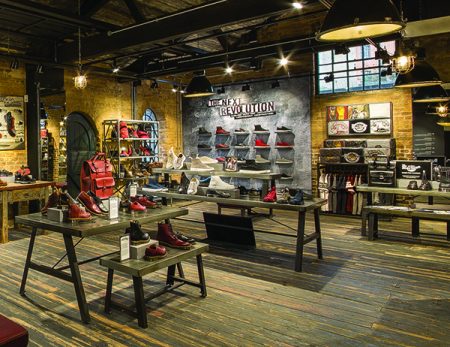 Based in Oldham, Studio OL3 is an architectural design practice specialising in interior design works and furniture design, within the retail sector. Studio OL3 has been in operation for four years and within this time has been involved with a wide range of projects including education schemes, industrial works, office spaces, residential projects, social housing and retail schemes.

To date, Studio OL3 has completed over 200 projects across the UK and Europe. Studio OL3’s clients include Airwair International (Dr Martens), Deckers; brands such as UGG and Hoka, The Church of England Diocese and Baker Mallett, amongst others.

Working within the retail sector, Studio OL3 has delivered showrooms and office spaces for UGG, showrooms for Hoka and stores worldwide for Dr. Martens. Projects have ranged in scope and size and have included architectural design, interior design and project management.

Working with UGG, Studio OL3 has designed showrooms and offices at sites in Amsterdam, Düsseldorf and Munich. For Hoka, the practice has been responsible for showrooms in Annecy and Düsseldorf.

Studio OL3 has been involved with a number of stores for Dr. Martens, including sites in Paris, Amsterdam, Brussels and Den Haag amongst others. Most recently, Studio OL3 was involved with Dr. Martens’ new flagship store in Camden, London.

Working on this project, Studio OL3 was appointed as the lead designer and furniture designer on the scheme. Studio OL3 has developed a strong working relationship with the Dr. Martens brand and this proved invaluable with this new store.

“We value our involvement with Dr. Martens and were pleased to be involved with this latest, flagship store. Dr. Martens Camden is a fantastic store in a great location, which in itself has an interesting heritage. Overall, this was an exciting project for us.”

“At Studio OL3 we pride ourselves in our flexible approach. We deliver projects on time and within budget, while producing innovative, functional and original designs.”